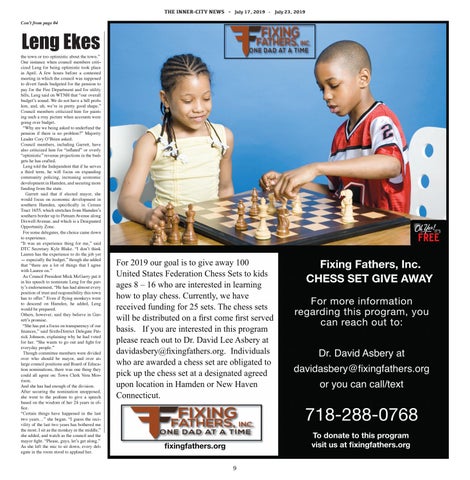 the town or too optimistic about the town.” One instance when council members criticized Leng for being optimistic took place in April. A few hours before a contested meeting in which the council was supposed to divert funds budgeted for the pension to pay for the Fire Department and for utility bills, Leng said on WTNH that “our overall budget’s sound. We do not have a bill problem, and, uh, we’re in pretty good shape.” Council members criticized him for painting such a rosy picture when accounts were going over budget. “Why are we being asked to underfund the pension if there is no problem?” Majority Leader Cory O’Brien asked. Council members, including Garrett, have also criticized him for “inflated” or overly “optimistic” revenue projections in the budgets he has crafted. Leng told the Independent that if he serves a third term, he will focus on expanding community policing, increasing economic development in Hamden, and securing more funding from the state. Garrett said that if elected mayor, she would focus on economic development in southern Hamden, specifically in Census Tract 1655, which stretches from Hamden’s southern border up to Putnam Avenue along Dixwell Avenue, and which is a Designated Opportunity Zone. For some delegates, the choice came down to experience. “It was an experience thing for me,” said DTC Secretary Kyle Blake. “I don’t think Lauren has the experience to do the job yet — especially the budget,” though she added that “there are a lot of things that I agree with Lauren on.” As Council President Mick McGarry put it in his speech to nominate Leng for the party’s endorsement, “He has had almost every position of trust and responsibility this town has to offer.” Even if flying monkeys were to descend on Hamden, he added, Leng would be prepared. Others, however, said they believe in Garrett’s promise. “She has put a focus on transparency of our finances,” said Sixth-District Delegate Patrick Johnson, explaining why he had voted for her. “She wants to go out and fight for everyday people.” Though committee members were divided over who should be mayor, and over atlarge council positions and Board of Education nominations, there was one thing they could all agree on: Town Clerk Vera Morrison. And she has had enough of the division. After securing the nomination unopposed, she went to the podium to give a speech based on the wisdom of her 24 years in office. “Certain things have happened in the last two years…” she began. “I guess the incivility of the last two years has bothered me the most. I sit as the monkey in the middle,” she added, and watch as the council and the mayor fight. “Please, guys, let’s get along.” As she left the mic to sit down, every delegate in the room stood to applaud her.