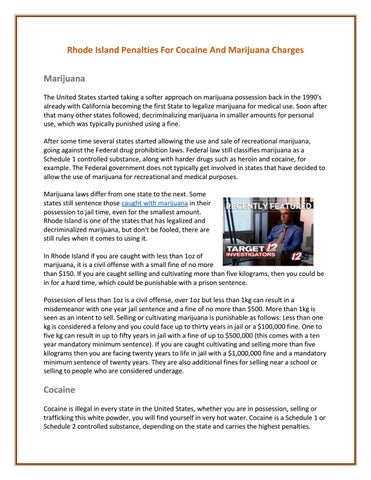 Rhode Island Penalties For Cocaine And Marijuana Charges Marijuana The United States started taking a softer approach on marijuana possession back in the 1990's already with California becoming the first State to legalize marijuana for medical use. Soon after that many other states followed, decriminalizing marijuana in smaller amounts for personal use, which was typically punished using a fine. After some time several states started allowing the use and sale of recreational marijuana, going against the Federal drug prohibition laws. Federal law still classifies marijuana as a Schedule 1 controlled substance, along with harder drugs such as heroin and cocaine, for example. The Federal government does not typically get involved in states that have decided to allow the use of marijuana for recreational and medical purposes. Marijuana laws differ from one state to the next. Some states still sentence those caught with marijuana in their possession to jail time, even for the smallest amount. Rhode Island is one of the states that has legalized and decriminalized marijuana, but don't be fooled, there are still rules when it comes to using it. In Rhode Island if you are caught with less than 1oz of marijuana, it is a civil offense with a small fine of no more than $150. If you are caught selling and cultivating more than five kilograms, then you could be in for a hard time, which could be punishable with a prison sentence. Possession of less than 1oz is a civil offense, over 1oz but less than 1kg can result in a misdemeanor with one year jail sentence and a fine of no more than $500. More than 1kg is seen as an intent to sell. Selling or cultivating marijuana is punishable as follows: Less than one kg is considered a felony and you could face up to thirty years in jail or a $100,000 fine. One to five kg can result in up to fifty years in jail with a fine of up to $500,000 (this comes with a ten year mandatory minimum sentence). If you are caught cultivating and selling more than five kilograms then you are facing twenty years to life in jail with a $1,000,000 fine and a mandatory minimum sentence of twenty years. They are also additional fines for selling near a school or selling to people who are considered underage.

Cocaine Cocaine is illegal in every state in the United States, whether you are in possession, selling or trafficking this white powder, you will find yourself in very hot water. Cocaine is a Schedule 1 or Schedule 2 controlled substance, depending on the state and carries the highest penalties.

Rhode Island tends to impose a lesser sentence on those who plead no contest in minor cocaine charges. This usually results in the offender doing one hundred hours of community service and attending a drug education program. Non-violent drug offenders are allowed to attend a drug rehabilitation program and be submitted to regular drug testing rather than serving a prison sentence. Penalties can be harsh when caught with cocaine in your possession, or if you are selling the drug. Remember that they are not as harsh as many of the other states around the country. A no contest plea will result in one hundred hours community service and a drug education program. Caught with up to 1oz in your possession can see you facing three years jail time and a fine of up to $5,000. If you have up to one kilogram on your possession then you could be facing up to fifty years in jail with a fine of up to $50,000. Caught with over one kilogram and the penalties are harsher with a sentence of twenty years to life and a fine of up to $1 million. Selling cocaine can result in very high penalties. If you are selling and are not drug dependent, then you could be looking at a life sentence and/or a fine of up to $500,000. If you are drug dependent and are caught selling up to one kilogram, you could see jail for up to fifty years with a fine of $500,000. Over a kilogram goes to twenty years in jail with a fine of up to $1 million. If you sell to minors you could face another fine of up to $500,000 and if you are caught selling within three hundred yards of a school, then your penalties are automatically doubled.

About Us: John R Grasso is an attorney admitted to practice in Rhode Island and Massachusetts. He is also admitted at the Federal District Courts. He is a member of the Bar of the United States Supreme Court and has an experienced support team working at his side to help focus on securing a resolution in the shortest period. John Grasso represents criminal defendants on misdemeanors and felony charges throughout the area. He handles a wide range of cases daily including domestic violence cases, immigration disputes, DUI cases, robberies and so much more. To find out more, visit https://www.johngrassolaw.com/. 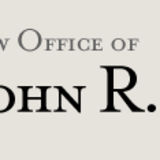 Marijuana laws differ from one state to the next. Some states still sentence those caught with marijuana in their possession to jail time, e...

Marijuana laws differ from one state to the next. Some states still sentence those caught with marijuana in their possession to jail time, e...