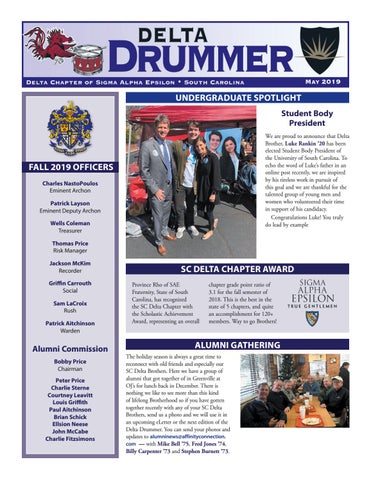 UNDERGRADUATE SPOTLIGHT Student Body President We are proud to announce that Delta Brother, Luke Rankin ’20 has been elected Student Body President of the University of South Carolina. To echo the word of Luke’s father in an online post recently, we are inspired by his tireless work in pursuit of this goal and we are thankful for the talented group of young men and women who volunteered their time in support of his candidacy.   Congratulations Luke! You truly do lead by example

chapter grade point ratio of 3.1 for the fall semester of 2018. This is the best in the state of 5 chapters, and quite an accomplishment for 120+ members. Way to go Brothers!

ALUMNI GATHERING The holiday season is always a great time to reconnect with old friends and especially our SC Delta Brothers. Here we have a group of alumni that got together of in Greenville at OJ’s for lunch back in December. There is nothing we like to see more than this kind of lifelong Brotherhood so if you have gotten together recently with any of your SC Delta Brothers, send us a photo and we will use it in an upcoming eLetter or the next edition of the Delta Drummer. You can send your photos and updates to alumninews@affinityconnection. com — with Mike Bell ’75, Fred Jones ’74, Billy Carpenter ’73 and Stephen Burnett ’73. Visit us on the web at www.sigmaalphaepsilon.info

CHAPTER ETERNAL M. Banks Lowry ‘70 M. Banks Lowry ’70 Funeral services for Brother M. Banks Lowry, Sr. ’70 were held Sunday, March 24, 2019, at Trenholm Road United Methodist Church at 2:00 p.m.   Brother Banks died peacefully at home with his family by his side after dealing with various cancers for over 13 years. He attributed his success in beating a number of the cancers to a great God, good medicine and his wonderful doctors, including Dr. Bradley Word and Dr. Steven Minter.   Born in Chester, SC, to the late Bright Lowry “Shine” and Rebecca Lowry, he was raised and graduated from high school in 1966 in Great Falls, SC. He attended Montreat Anderson Junior College where he was Student Body President his sophomore year, then graduated from USC in 1970 with a degree in banking and finance. At USC he was a member of Sigma Alpha Epsilon fraternity.   The majority of his career was spent in commercial office furniture sales and office design. Banks was a long-time and faithful member of TRUMC where he chaired and served on a number of committees. He loved his church and, most especially, the Hope Sunday School class. Over the years he

participated in many other volunteer activities throughout the community, one of the most meaningful being his involvement in building homes with Habitat for Humanity for a number of years.   After college he served 6 years in the Army Reserve. He was a long-time member of the Business Association of Columbia. One of his greatest pleasures for over three decades was sitting in Williams Brice Stadium with his wife, children, and friends, watching the Gamecocks. His greatest joy was spending time with his family (3 children and 4 grandchildren).   Woodworking, camping and boating in Murrells Inlet at Garden City were hobbies and pleasures he enjoyed.   Banks was a true gentleman of the highest integrity, a dear friend to many, and was loved and respected by all who knew him well. He was a wonderful husband, father and friend. He will forever be remembered for his kindness, generosity and willingness to always lend a helping hand.   He is survived by his wife, Mary Willa Roper Lowry; three children, four grandchildren, two brothers, Dr. Bright Lowry (Judy) and Rev. James Lowry (Martha), a brother- in-law, Ed Roper (Karen) and sisterin-law, Lee Roper, and many nieces, nephews and cousins.   To view the online obituary, see

Porter G. Barron ’66  Brother Porter Gable Barron ’66 died on November 4, 2018. He was a son of the late Dr. William Townsend and Eve Gable Barron, born December 4, 1942. Mr. Barron is survived by his wife of 50 years, Lynn (Smith) and their son, Porter, Jr. and his wife, Shannon and her daughter, Mila. Mr. Barron also is survived by his brother, W.T. Barron, Jr., his wife Virginia and their children, Will Barron, Mark Barron and Christine Barron Seixas.   Brother Barron graduated from the University of South Carolina with a B.A. in English and a Ph.D. in English Literature. After serving as secretary and then chairman of the South Carolina Committee for the Humanities, he taught English at Erskine College. Later, he farmed at Wateree, in lower Richland County, with his brother, and retired in 2010 after many years of managing family property in Louisiana.   Brother Barron felt fortunate to have many loyal friends who sustained him during his long and unflinching struggle with juvenile diabetes, which eventually afflicted him with blindness and other infirmities. Those who met him often remarked on his resigned determination, genteel manners or hollow leg. He is and will be missed dearly. Memories may be shared at www.dunbarfunerals.com.

On December 3, 2018, SAE SC Delta hosted Dr. Michael Kanwisher at the Columbia Marriott for an Alcohol Awareness seminar. The entire Greek community at USC was invited to attend to learn about the biological nature of alcohol and its effects on different parts of the human body. This seminar was effective as it engaged the audience with the realities of binge drinking, and it provided actual scenarios that many college students find themselves in.

Other (Up to $24.99) Brennan Lyles Benjamin Hoopes

ANNUAL FUND UPDATE – A CALL TO ACTION Help Us Make the 2018-19 Giving Year Strong Our 2018-19 giving year, which began on September 1, is coming to a close in a few months with $3,460 collected from 37 Brothers. We want to thank those 37 Brothers (you can find them above and under the Honor Roll tab at our website) who have already made a contribution to SC Delta so far this giving year! Last year only 55 out of 1,590 alumni chose to make a voluntary gift. We have the potential to exceed last year’s total—but we need your immediate help. Who will be next to join our 2018-19 Honor Roll?   You can donate online by simply going to our website, sigmaalphaepsilon.info and selecting the “Donate” button at the top of the page. Donations can also be made through our toll-free Donation Hotline at 1-800-975-6699.

“My contributions seem a small price to pay to express appreciation for all Sigma Alpha Epsilon did for me.”

Our college days came and went, but the real SC Delta experience never ends. If you cherish those lasting friendships, if you appreciate the values that shaped your life, make your annual gift Today! Delta Drummer

“I give because my SC Delta experience was invaluable to me and it’s important to make that experience available to others.”

ALUMNI UPDATES What Have Your SC Delta Brothers Been Up To? Austin Morgan ’16 Austin has joined JEAR Logistics as a Logistics Executive in Charleston. He attended Pinewood Prep School and majored in Hospitality at Carolina. Steve Lore ’13 Steve has joined TransPerfect in Atlanta as an Account Executive. He is responsible for developing new business relationships and serving as the first level of support to existing clients. He majored in Hotel, Restaurant and Tourism Management and attended Woodward Academy. JT Nix ’07 JT is now a Business Development Officer with the Georgia Small Business Capital in Atlanta. JT states: “My role is to grow the SBA 504 loan program for small businesses within the commercial real estate brokerage community.” He majored in political science at Carolina.

Lawson has joined Republic Services in Greenville as a Sales Representative for Commercial and Industrial. The company provides environmental services and recycling. Lawson graduated from J L Mann High School and majored in Hospitality at Carolina.

William has formed his own law firm called Wampler Law, PLLC, in Abingdon, Virginia. He attended McCallie High School and majored in Poli Sci at Carolina. He went on to get his JD Degree from the Liberty University School of Law.

Chip Nagle ’76 Chip is president of NAgle & Associates in Atlanta, a healthcare executive search firm. Specifically he is focusing on Hospitals, Health Systems, and both Hospital sponsored and independent physician groups. He has his MS in Health from Georgia Tech, and majored in Biology at Carolina. Bear Givhan ’14 Bear is a contract commercial pilot with Scientific Aviation in Denver, Colorado. He transferred from Carolina to the University of Colorado in Boulder. He attended Highland Park High School.

Will Johnson ’17 Will has joined BB&T Dealer Financial Services as a Loan Processor in Greensboro. After attending Page High, Will majored in Economics at Carolina. Will Mischner ’04 Will has joined The Urban Electric Company as a Senior Director in Charleston. He majored in Mass Communication at Carolina and attended Camden High School. He was originally with Le Creuset as Marketing Communications Major.

SUBMIT YOUR ALUMNI NEWS What you’ve been up to? Let your brothers know by submitting your personal news to alumninews@affinityconnection.com. Alumni updates could be the basis for a future 4

newsletter feature or eLetter profile. Any and all photos are welcome, too! Submit them at sigmaalphaepsilon.info. 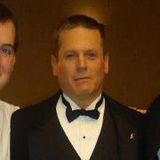