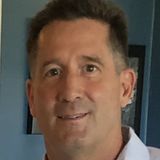 John Gavin received his B.A. in English and American History from the University of New Hampshire. John was heavily active in a number of clubs and school activities during his undergraduate career, most notably Big Brothers and Big Sisters of America. John is also interested in health and well-being, and sports have played an important role in his life. He was a part of the Men's Lacrosse Team and reached the quarter-finals of the NCAA National Men's Lacrosse Tournament in 1986. John also played for Orleans' summer lacrosse squad in the Cape Cod Summer Lacrosse League (CCL). Check out John's latest news at his website, http://johngavinlagunabeach.org/