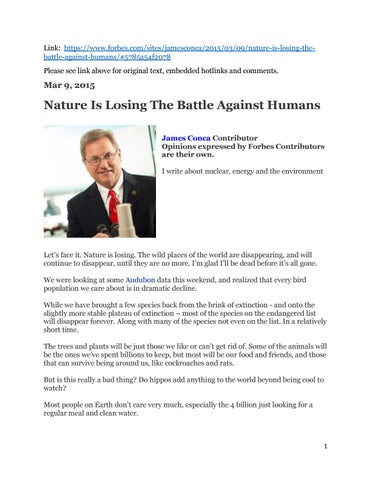 Nature Is Losing The Battle Against Humans James Conca Contributor Opinions expressed by Forbes Contributors are their own. I write about nuclear, energy and the environment

Let’s face it. Nature is losing. The wild places of the world are disappearing, and will continue to disappear, until they are no more. I’m glad I’ll be dead before it’s all gone. We were looking at some Audubon data this weekend, and realized that every bird population we care about is in dramatic decline. While we have brought a few species back from the brink of extinction - and onto the slightly more stable plateau of extinction – most of the species on the endangered list will disappear forever. Along with many of the species not even on the list. In a relatively short time. The trees and plants will be just those we like or can’t get rid of. Some of the animals will be the ones we’ve spent billions to keep, but most will be our food and friends, and those that can survive being around us, like cockroaches and rats. But is this really a bad thing? Do hippos add anything to the world beyond being cool to watch? Most people on Earth don’t care very much, especially the 4 billion just looking for a regular meal and clean water.

For over 150,000 years, the global human population was steady at about 10 million. Then... [+] civilization appeared, fueled by the many significant developments that humans had begun to apply en masse including agriculture, domesticated animals, tools, serious engineering, and various uses of fire, fibers and the wheel. Our population began increasing during the Common Era, rising to 300 million during the Middle Ages and to a billion at the beginning of the Industrial Age. Then 2 billion in 1927, 3 billion in 1960, 4 billion in 1974, 5 billion in 1987, 6 billion in 1999 and 7 billion in 2011. But the toll on Nature has been profound and Nature is losing the battle. Source: WNA So why is this happening? Destruction of habitat. While we all understand destruction by direct pollution from things like oil spills, coal mining and toxic waste discharges, the worst culprit is simple expansion of human habitat. Housing developments, agriculture, roads, deforestation, an increasing energy footprint, industrial expansion, fires, overfishing and acidification the oceans, and desertification. Keeping 7 billion people alive just takes a lot of space and resources, and we donâ&#x20AC;&#x2122;t have a lot to spare for the luxury of Nature. Soon weâ&#x20AC;&#x2122;ll be 10 billion. 2

We’re burning billions of acres of pristine Indonesian rain forests to plant palm oil trees (Scientific American). Palm oil is now the world’s cooking oil of choice since it’s one of the healthiest oils available with a low price tag and long shelf life. But the low price tag doesn’t cover destroying one of the two key rainforests on Earth. The Amazon is being destroyed for soybeans, sugar, coffee, cattle, hydroelectric and wood. Even mangrove swamps are being destroyed for shrimp farms. You might not know that mangrove swamps are a critical piece in the global ecosphere, cycling gases between ocean and atmosphere in a unique manner. I’m not saying that life will disappear and the Earth will be a dead planet. It’ll just become more like our back yards. Some nice and manicured, some dumpy with weeds. A few nicely-kept parks. But definitely not natural. However, some of us are looking over our shoulder. There’s a danger lurking in this Disney version of Earthland. Humans actually need a certain amount of natural wildness for our own survival. There’s a reason that oxygen is in the air. It doesn’t just come out of the ground. The real problem is that most people are so completely divorced from nature that they don’t know what’s happening, what’s gone before, or what awaits us. These global changes occur so slowly, even the huge changes, that it’s hard to notice. No one remembers the passenger pigeon, but when my grandfather was born, the passenger pigeon was the most abundant bird in North America and possibly the world. People would gaze in wonder as a single flock of ten million pigeons would block out the sun with a deafening roar that would last an hour as a single huge flock passed overhead. But by 1900, their billions had dwindled to a few dozen wild flocks. In 1914, the last passenger pigeon died in the Cincinnati Zoo. The passenger pigeon was hunted out of existence, victimized by the fallacy that no amount of human exploitation could endanger a creature so abundant. We are infected by that same fantasy today – that the Earth is so large, the oceans so deep, the atmosphere so vast, that nothing we do can really harm it. This is completely wrong. Humans have the numbers, and the technologies, to pretty much destroy the surface of this planet. Or remake it in some dumbed-down fashion of a specimen garden. For over 150,000 years, the Earth had only 10 million people on it at any one time. But our astounding cerebral cortex gave rise to a few key developments like fire, the wheel and agriculture, and an astonishing frontal lobe allowed us to use them effectively. 3

The population began to grow just before the beginning of the Common Era (CE), rising to 300 million during the Middle Ages and to a billion at the beginning of the Industrial Age. Then 2 billion in 1927, 3 billion in 1960, 4 billion in 1974, 5 billion in 1987, 6 billion in 1999 and 7 billion in 2011. This exponential rise is textbook for a bacterial colony in a petri dish, right before it dies from outpacing its food sources and generating too much waste. It’s also eerily analogous for us on the petri dish of Earth. Humans now comprise the largest mass of vertebrate matter on land. The rest is almost all our food and friends, mainly the animals we domesticated plus a bunch of xenobiotics we’ve transported far from their habitats (Cornell University). Hardly any vertebrate mass left on land is wild or natural (In These Times). Let that sink in for a minute. Most of what people see in National Geographic or on the Discovery Channel or in movies about animals, IS ALMOST ALL GONE. Humans have dammed a third of the world’s rivers, have covered, destroyed or altered half of the world’s land surface. We use up most of the fresh water faster than it can be replenished. And we extinct about 30,000 species every year. And this is all continuing apace. Globally, there is no slowing of these trends. From the original equilibrium of 10 million people to 10 billion people, Nature just can’t handle this density of humans. I hate to be optimistic, but there is still time to prevent the complete loss of wild Nature. We may be beyond the limits to growth, but the system is still resilient enough to respond to even a reasonable attempt at conservation and rehabilitation. The population will begin to fall back towards the end of this century. The birth rates are already changing in that direction. But it will take decades for that to translate into population reduction and we have to figure out how to keep us all alive without completely trashing the place. And that's where energy comes in. The best birth control in history has been access to energy. At least 3,000 kWhs per person per year. Energy trends with many aspects of society (UN HDI), the most commonly discussed being fertility rates - a ten-fold increase in energy consumption results in a 3-fold decrease in fertility rates and a 3-fold decrease in unwanted pregnancies. Access to family planning and contraception increases with access to energy which leads to improved productivity and higher family incomes, increased savings and investment, overall reduced healthcare costs especially for women, and greatly improved education, infant mortality rates, life-span and general quality of life (www.geni.org). 4

Japan Is it necessary for the world that was created by fossil fuels forsake them and force the population to drop back from 8 billion to 1 billion or 100 million? Can we do better in preserving the environment and biodiversity? If there is a Creator of the Universe, what did the Creator intend? What should humans do? 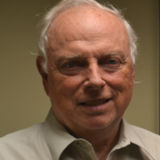 Nature Is Losing The Battle Against Humans (James Conca) USofA

Nature Is Losing The Battle Against Humans (James Conca) USofA