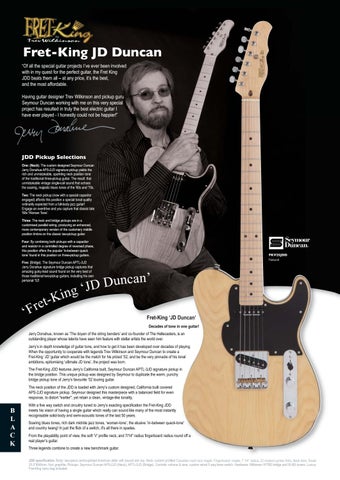 Fret-King JD Duncan “Of all the special guitar projects I’ve ever been involved with in my quest for the perfect guitar, the Fret King JDD beats them all – at any price, it’s the best, and the most affordable. Having guitar designer Trev Wilkinson and pickup guru Seymour Duncan working with me on this very special project has resulted in truly the best electric guitar I have ever played - I honestly could not be happier!”

JDD Pickup Selections One: (Neck). The custom designed Seymour Duncan Jerry Donahue APS-2JD signature pickup yields the rich and unmistakable, sparkling neck position tone of the traditional three-pickup guitar. The result: that unmistakable vintage single-coil sound that echoes the soaring, majestic blues tones of the '60s and '70s. Two: The neck pickup (now with a special capacitor engaged) affords this position a special tonal quality ordinarily expected from a full-body jazz guitar! Engage an overdrive and you capture that classic late '60s ‘Woman Tone’. Three: The neck and bridge pickups are in a customised parallel wiring, producing an enhanced, more contemporary version of the customary middle position timbre on the classic two-pickup guitar. Four: By combining both pickups with a capacitor and resistor in a controlled degree of reversed phase, this position offers the popular ‘in-between quack tone’ found in this position on three-pickup guitars.

Jerry Donahue, known as ‘The doyen of the string benders’ and co-founder of The Hellecasters, is an outstanding player whose talents have seen him feature with stellar artists the world over. Jerry’s in depth knowledge of guitar tone, and how to get it has been developed over decades of playing. When the opportunity to cooperate with legends Trev Wilkinson and Seymour Duncan to create a Fret-King ‘JD’ guitar which would be the match for his prized ’52, and be the very pinnacle of his tonal ambitions, epitomising ‘ultimate JD tone’, the project was born. The Fret-King JDD features Jerry’s California built, Seymour Duncan APTL-3JD signature pickup in the bridge position. This unique pickup was designed by Seymour to duplicate the warm, punchy bridge pickup tone of Jerry’s favourite ’52 touring guitar. The neck position of the JDD is loaded with Jerry’s custom designed, California built covered APS-2JD signature pickup. Seymour designed this masterpiece with a balanced field for even response, to distort "earlier", yet retain a clean, vintage-like tonality. 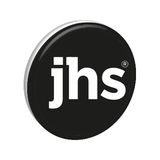