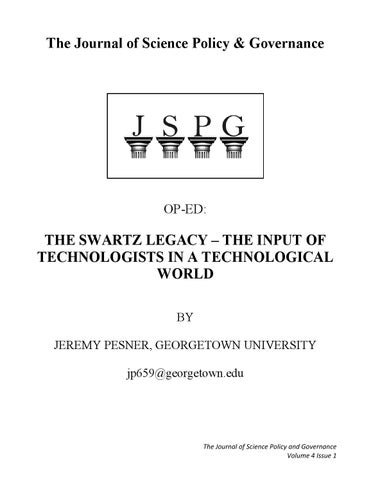 THE SWARTZ LEGACY – THE INPUT OF TECHNOLOGISTS IN A TECHNOLOGICAL WORLD

On January 11, 2013, beloved Internet activist Aaron Swartz committed suicide. Swartz began his technology career as an early contributor to web specifications, and was also on the founding team of reddit, the site that has become the forum of the Internet everyman. Swartz then turned his attention to activism, becoming heavily involved in the Creative Commons movement, creating the activist group Demand Progress and playing key roles in the protests of the Stop Online Piracy Act (SOPA) and PROTECT-IP Act (PIPA). The Internet has collectively mourned his loss, with any number of tribute websites and articles, and his death has spurred a renewed commitment to the promises of open access and Internet Freedom. Now more than ever, it is clear how passionate Swartz and others like him are about the ideals behind the Internet culture and economy. However, it is also clear how much adversity these activists face. Swartz was set to go to trial for the alleged theft and distribution of millions of publicly-funded research articles from the online academic service JSTOR on the MIT campus. Although JSTOR quickly dropped charges against Swartz, MIT did not, and United States Attorney Carmen Ortiz elected to prosecute him on behalf of the federal government. The prosecution eventually levied no fewer than 13 felony counts at Swartz, including wire fraud, computer fraud, obtaining information from a protected computer and criminal forfeiture. These are charges usually cited for those causing harm to others' computers, such as computer viruses, distributed denial of service attacks, and illegal data mining. Although Swartz’s actions caused no damage to any machines, Ortiz elected to prosecute Swartz to the fullest extent of the law. According to his close friend and confidant Lawrence Lessig and girlfriend Taren StinebricknerKauffman, Swartz could not afford the legal fees required of the protracted trial, and could not bring himself to ask for donations. Although he left no note, Lessig, Stinebrickner-Kauffman and Swartz’s family firmly believe that the government’s zeal in prosecuting the trial was a major contributor to Swartz's suicide. Swartz’s prosecution was initially handled by the Middlesex County District Attorney’s office. The Journal  of  Science  Policy  and  Governance   Volume  4  Issue  1

According to defense attorney Harvey Silvergate, they planned to keep Swartz on probation and eventually drop the charges provided he stayed out of trouble. It was only when the federal prosecutors got involved that the potential sentence significantly increased. Ortiz and the government have stood by their decisions, reminding their critics that “Stealing is stealing whether you use a computer command or a crowbar, and whether you take documents, data or dollars.” This is only the latest in a series of incidents demonstrating the dissonant thinking between technologists like Swartz, who serve as the vanguard of new technological development and technology-driven social development, and the incumbent entities who have a financial stake in maintaining control over content and information, along with the laws and business models that go with them. Smaller publishers that cannot afford to do business with online media services like Netflix and Spotify are still dependent on traditional revenue streams. However, while no one denies that Swartz purposefully and willingly broke the law as it currently stands, many share his values of open and free access to information, whether for academic research, investigative journalism or creative expression. Some don't like the idea of an online journal like JSTOR making a profit from academic articles when neither the authors nor reviewers do. Others want to be able to upload, share and remix content without consulting a lawyer. Still others want to be able to access information in open, machine readable formats to perform analytics and data visualizations. The difficulty comes from the value, both tangible and perceived, that information and content has for its owners: the prosecution claimed that Swartz stole “millions of dollars” worth of property, but as Lessig wrote, “anyone who says that there is money to be made in a stash of ACADEMIC ARTICLES is either an idiot or a liar” (original emphasis maintained).1 As the information technology revolution comes into full swing, we can see the conflict between those who want to use and understand its capabilities to the fullest and those who are more reticent to fundamentally alter the status quo. 1

This is not to say that all laws and norms should suddenly change to accommodate all potential new technology, but these longstanding conflicts demonstrate that the world is irrevocably changing, and a failure to acknowledge and change with it can literally cost lives. But how precisely should these changes occur? Rather than prosecuting and denigrating Swartz for breaking laws, many of which were written before a time of widespread information creation and access, perhaps lawmakers could have learned from him and more closely considered the value and use of information in a digital age. Technologists have not only led the way in the creation of new physical technologies, but also in adopting the reconstructed social relationships that those technologies facilitate. The best example of this is the invention of the Internet itself. The initial TCP/IP architecture was developed in order to transfer information between research universities and the government. These were nonprofit entities dedicated to the advancement of science and knowledge. As such, there were certain values and ideals embedded in their protocols: the protocols were open, so they could be implemented on any hardware or operating system; they were free, so there were never any licensing fees associated with their implementation; and they have evolved with new technical capabilities, so that the protocol driving a small university network could adequately scale and support a large portion of the globe while still allowing millions of new end-users to join relatively easily. Just as those basic values helped to drive the early development of the Internet, they are responsible for much of the online activity today. Whether in the open-source production that gave us the Unix operating system, the collective knowledge system that is Wikipedia, or the coordination of the SOPA protests, the ideas of sharing, transparency and collaboration are part and parcel of the Internet. If they were not, the online world would be a very different place, and very likely would not have transformed the globe so completely as only a portion of the world would be included. Those who understand this have often created great businesses and initiatives. Alexis Ohanian, a longtime friend of Swartz's and fellow co-founder of reddit, recently released Without Their The Journal  of  Science  Policy  and  Governance   Volume  4  Issue  1

Permission, a book detailing both his journey as a technology entrepreneur and the journey of others as they founded their own businesses, nonprofits or even just a charitable initiative. Kickstarter, a website that enables creators with a project but limited capital to request donations, facilitated the pledging of almost $30 million in 2010 alone. Throughout his book, Ohanian is adamant about the role of the free and open Internet, and was passionate enough about the idea to jump headfirst into lobbying against SOPA. Although he had never considered politics or the future of the Internet policies before, it was clear that these factors would be key influencers on the ability of future entrepreneurs and do-gooders to take full advantage of the Internet platform. The expertise of technologists must be consulted and understood for future technology policy, both for the technical details and a clear understanding of what the technology can enable in society. SOPA demonstrated the dangers of creating policy without such input – much of it was crafted by legislators and lobbyists with no deep knowledge about the Internet or its culture. The resultant bill threatened the social and technical structures of the Internet in far too many ways, all in the name of protecting the traditional view of intellectual property. As increasing amounts of information move online, the charge of “computer fraud” becomes meaningless in cases like Swartz's, as nearly any type of information is accessed with computers, legally or otherwise. Computer technology can no longer be treated as a specialized section of law and policy – it is embedded throughout our society, and accordingly our legal system. One cannot expect to readily apply rules and norms from an era of physical information to one of metaphysical information, nor to fundamentally alter a technical mechanism so central to societal operation without consequence. If there is a silver lining to this terrible loss, it is that some in Congress have actively worked to prevent it in the future. In Summer 2013, Representative Zoe Lofgren and Senator Ron Wyden drafted an amendment to the Computer Fraud and Abuse Act, known as “Aaron's Law,” that differentiates computer crimes such as Terms of Service violation from malicious phishing or password cracking, The Journal  of  Science  Policy  and  Governance   Volume  4  Issue  1

eliminates vagaries that allows defendants to be charged multiple times for the same crime, and reduces penalties to be more reasonably proportional to the severity and harm of the crime. As of this writing, Aaron's Law has not been voted on. However, while amending the conditions of computer fraud is better than nothing, it is not sufficient in the long term. New capabilities, norms and entire societies have been created thanks to the Internet and the massive flow of information that it engenders. Laws rooted in old practices and assumptions become less relevant every day, and they will doubtlessly cause problems for other technologists who seek to push the boundaries of what the Internet and information is capable of. Altogether new laws, written from the ground up with knowledge of how technology works today, will do a far better job of keeping information safe and spurring profits in the digital world. January 18, 2013, the one-year anniversary of the SOPA protest, was celebrated as Internet Freedom Day, although it was punctuated with the sadness of Swartz's recent passing. The best way to honor him would be to work towards a shared understanding of what Internet freedom means, by emphasizing the values that have been key for the development – and future evolution - of the Internet, its culture and its economy. It is only through cooperation and conversation from all sides that these complex issues can ever be settled.

Bio Jeremy Pesner is a Computer Science and IT researcher and policy analyst, specializing in useroriented policy issues. He received his BS in Computer Science from Dickinson College and recently completed his MA in Communication, Culture & Technology with an Internet policy focus from Georgetown University. He has published and presented work with Georgetown University's gnovis journal, STGlobal, FedScoop and the Internet Association, and is a StartingBloc Fellow and a Next Generation Leader with the Internet Society. You may find more information about him at his website.

Jeremy Pesner. (2014) "The Swartz Legacy: The Input of Technologists in a Technical World." The Journal of Science Policy and Governance. 6...

Jeremy Pesner. (2014) "The Swartz Legacy: The Input of Technologists in a Technical World." The Journal of Science Policy and Governance. 6...