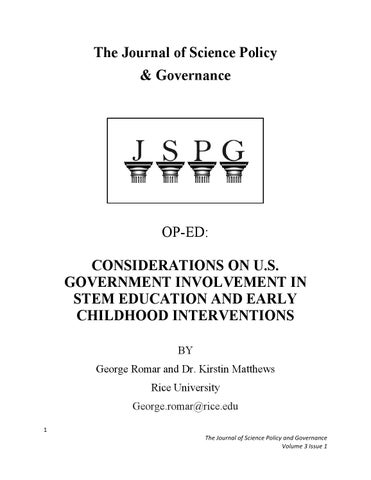 If the federal government is expected to act in the national public interest, safeguarding the continued development of the country’s home-grown science and technology (S&T) should be a top priority. Such development has been central to the prosperity of America’s market-oriented economy and has contributed to an elevated standard of living (Galama & Hosek, 2007). Through adequate education it also has the potential to increase the scientific literacy of the electorate, which is crucial in the formation of reliably informed public opinion on sciencerelated policy issues such as funding for stem cell research, strategies for environmental conservation, and reforms for public education. Enhancement of American science, technology, engineering, and math (STEM) education at all levels, even early childhood, is therefore a justifiable federal priority. It is no secret that America’s S&T establishment is one of the best developed in the world. Despite having only 5 percent of the world’s population, the United States accounts for 31 percent of the world’s research and development (R&D) spending, 23 percent of the world’s researchers, and 26 percent of all science and engineering (S&E) articles. Moreover, according to the Academic Ranking of World Universities, 17 of the world’s top 20 universities are located in the United States (Academic Ranking, 2012). Such recognition for the quality of American higher education institutions (which also have the greatest pull on STEM students) has contributed to the country’s leading status as the top destination of choice for international students – a group which has contributed substantially to America’s STEM enterprise (Stephan & Levin, 2001). However, U.S. global leadership in S&T over the past five decades is not guaranteed in perpetuity. Continued leadership in S&T is highly dependent on the United States’ ability to 2 The  Journal  of  Science  Policy  and  Governance   Volume  3  Issue  1

produce the number of qualified STEM professionals that is necessary to fill the domestic labor force demand. This presents a major challenge for the nation’s public primary and secondary education system, which has often been publicly criticized for its weaknesses related to STEM education. For example, despite living in the country with the most respected higher education establishment in the world, 15-year-olds in the United States consistently score below their peers in many other developed countries on the Program for International Student Assessment – a literacy assessment that evaluates mathematics and science knowledge (Science and Engineering Indicators, 2012). If effective ways of correcting these shortcomings are not discovered and policies addressing these shortcomings are not implemented, the country may find itself deficient in STEM professionals in the domestic labor force. In fact, the emergence of such a domestic labor shortage has already become part of national and local immigration debates as advocates for reform call for increased admission of skilled labor (Immigration Policy Center, 2013). The American economy is projected to steadily increase the number of the STEM jobs between 2008 and 2018 that require university graduates with appropriate skills and expertise (Carnevale, Smith, & Strohl, 2010). However, the current output of college graduates in STEM fields (~300,000 annually) is insufficient to meet the demand (exceeding 400,000 annually). As a result, over the next decade the President’s Council on Science and Technology (PCAST) has reported the need for producing at least 1 million more STEM graduates than the current graduation rates (Report to the President, 2012). Technology companies frequently express concerns about this shortage of STEM professionals. Inadequate supply in the United States may lead companies to relocate or call for increased immigration of highly skilled labor. For example, in its 2012 National Talent Strategy, 3 The  Journal  of  Science  Policy  and  Governance   Volume  3  Issue  1

Microsoft Corporation stated that although in the past it has invested 83 percent of its multibillion dollar R&D budget in the United States, the STEM workforce shortage may force it and other technology companies to send the unfilled jobs to countries that do produce enough STEM graduates (Microsoft National Talent Strategy, 2012). Although Microsoft’s assessment of the gravity of the shortage is contended by some (Costa, 2012), it remains that the projected growth and demand of STEM jobs outpaces the supply of American STEM graduates. Congress and President Obama have attempted to address STEM education shortfalls by enacting and reauthorizing the America COMPETES Act (2010). In particular, the Act has provided targeted funding for education initiatives supported by the National Science Foundation (NSF). PCAST’s 2012 Executive Report to President Obama included a number of recommendations for NSF programs at the post-secondary education level that it believes will help produce an additional 1 million STEM graduates (Report to the President, 2012). Although addressing the STEM shortage at the post-secondary level is important, the NSF also wisely recognizes that the strongest foundation for generating a capable STEM workforce must be laid much earlier. Hence, the NSF has sponsored a number of K-12 STEM education projects through its Discovery Research K-12 program (Discovery Research, n.d.). The foundation also has a program that sponsors STEM graduate students at universities around the country to partner with local K-12 schools with the explicit aim to “stimulate interest in science and engineering among students and teachers” (About NSF GK-12, n.d.). These initiatives are solid steps in the right direction, but the program’s relatively small scale limits their national impact. The NSF’s 179 graduate student teaching fellowships have no hope of fully serving the country’s 132,183 K-12 schools (Digest of Education, 2012). An expanded 4 The  Journal  of  Science  Policy  and  Governance   Volume  3  Issue  1

STEM partnership between the government and the nation’s 6,742 colleges and universities is needed. Priority should be placed on early childhood education research. Given enough welltrained teachers, researchers at the National Bureau of Economic Research have found that early childhood interventions as simple as providing smaller class sizes can yield measurable benefits in adulthood (Dynarski, Hyman, & Schanzenbach, 2011). Smaller classes were shown to increase young children’s prospects of earning a college degree by 1.6 percentage points and made them more inclined to pursue STEM fields. Researchers at MIT have recommended that taxpayers provide early education for every interested family because each dollar invested returns as much as $13 in costs for public education, criminal justice, and welfare over the next few decades, plus increased tax revenue in the long term (Calman & Tarr-Whelan, 2005). These findings, among others (Reynolds et al., 2001; Heckman, 2007; Barnett, 2007), point to the notable benefits that result from early childhood interventions. This evidence is crucial for federal STEM education policy formulations aimed at sustaining the nation’s STEM activities and laying a critical foundation for STEM more broadly.