When the World Disintegrates Before Your Eyes for solo viola 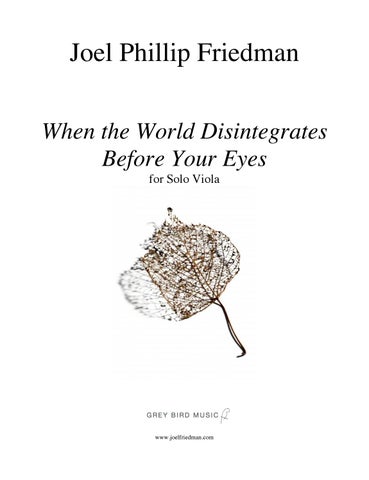 When the World Disintegrates Before Your Eyes is available through

When the World Disintegrates Before Your Eyes Performing Notes When the World Disintegrates Before Your Eyes is a taut, muscular, and propulsive work that is loosely based on the classical scherzo form. But, it is a deconstructed scherzo: haunted by the gestures and energy of the remarkable Scherzo from Beethoven’s Ninth Symphony, but not adhering to the formal, tonal, or rhetorical principles of that movement or its historical period. I have always loved and been fascinated by Beethoven’s Scherzo feeling that it was not of its time, more the “heavy metal Mother of All Scherzi” than a movement from a 19th Century symphony. Shards of Beethoven’s piece hover throughout this Scherzo. When the World Disintegrates Before Your Eyes’ dark intensity and jarring fragmentation reflect my response to a dear friend’s recent harrowing period of intense emotional turmoil. There were moments when what was familiar suddenly shifted to being foreign and impenetrable. I watched as reality seemed to lose its grip and disintegrate for my friend. I could see it in her eyes. Simple every day exchanges were bafflingly and suddenly interrupted by abrupt descents into perplexing, enigmatic confusion and odd conversational tangents. The amount of energy expended by all involved was extraordinary, and utterly exhausting. It was a scary and jarring time. The difficulty of the work lays not so much in any technical challenge, but in articulating and maintaining the work’s dramatic arc and pulse, all while navigating the sudden interruptions and shifts between ideas and sections. One whole made from many parts. It must maintain its drive and be more than a series of episodes. To paraphrase the old vaudeville joke: the key to its success is… timing! It also requires a sense of color to make the general intensity of the movement not monochromatic. A scherzo frames the movement. The opening section states the propulsive Scherzo idea, but is full of jarring interruptions. This segues into what would be the Trio section, providing a bit of relief. The ever-shifting meters and irregular phrasing undercut the simplicity of the legato Trio theme. What follows are compressed and developed recapitulations of both the Scherzo and Trio material. The second Trio restatement is abruptly shorn off by an exhausting, scrambling episode that frequently fixates on a syncopated rhythm accented by double stops on the open strings. A brief, mocking restatement of the Trio is presented followed by a final return of the opening Scherzo theme. But, the piece doesn’t have a conclusion. It simply cycles and then runs out of steam, ending depleted. I’d like to especially thank the exceedingly gracious violist Natasha Vershilova Daniels and violinist/violist Scott St. John for their invaluable assistance. When the World Disintegrates Before Your Eyes was commissioned by the Irving M. Klein International String Competition and was premiered during the semifinalist round of the 2013 Klein Competition on June 8, 2013 in San Francisco, CA. Joel Phillip Friedman

When the World Disintegrates Before Your Eyes for solo viola

My fierce little solo viola piece When the World Disintegrates Before Your Eyes commissioned for the 2013 Irving M. Klein International String Competition. Performed here at its Washington D.C. premiere by the superb Derek Smith, principal violist of the New Orchestra of Washington, at Georgetown University. It is a virtuosic, intense, fractured, scherzo-like piece with echoes of Beethoven. https://joelfriedman.com/wp-admin/post.php?post=1097&action=edit 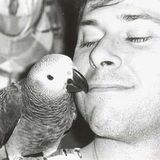