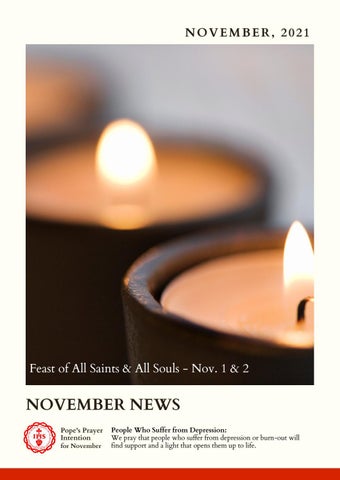 A MONTHLY NEWSLETTER PRODUCED EXCLUSIVELY FOR OUR SISTERS

People Who Suffer from Depression: We pray that people who suffer from depression or burn-out will find support and a light that opens them up to life.

Incarnational Spirituality flows from the Mystery of the Incarnation - the mystery most central to our faith as Christians. Yet it took Christianity about 400 years to state it in an unequivocal way at the Councils of Nicaea (325 AD), Ephesus (431 AD) and finally Chalcedon (451 AD). The Chalcedonian Definition affirms that Christ is consubstantial with the Father according to the Godhead, and consubstantial with us in his humanity. In plain words: it is not that Jesus was really only divine with just the appearance of being human, but with no human mind and will, or the contrary, human but with an anointing unlike any other prophet. Jesus Christ, born of the Virgin Mary and crucified in front of her and many others, was fully human and fully divine. The All Mighty God had become All Vulnerable. As St. Paul says: “we proclaim Christ crucified, a stumbling block to Jews and foolishness to Gentiles, but to those who are called , Jews and Greeks alike, Christ the power of God and the wisdom of God (1 Cor, 1: 23-24). Actually, biblical scholars focus on different verses of the Wisdom Literature to point at the gradual revelation of the Second Person of the Trinity in the Old Testament that reaches its climax in the beginning of the Gospel of John. Hence the passage we chose today for our reading from Proverbs: “Thus says the wisdom of God: When the Lord established the heavens I was there. ...then I was beside Him as his craftsman, and I was his delight day by day, playing before him all the while, playing on the surface of the earth, and I found delight in the human race”. Proverbs 8: 27—31 In this and a few more verses of the Wisdom Literature, the Wisdom of God is the presence of the second person before the Incarnation. (i.e., Proverbs 9:1: Wisdom has built herself a house.) Actually, scholars like the Dominican Donald Goergen, writer and professor at Aquinas Institute of Theology, take the beginning of the Gospel of John and substitute the Word, or in Spanish “Verbo”, or in Greek “Logos” for the word Wisdom (“Sabiduria” in Spanish, “Sophia” in Greek). In the beginning was Wisdom, And Wisdom was with God, And Wisdom was God. She was in the beginning with God, And all things came into being through her, And without Wisdom nothing came to be”. (John1: 1-3) NEWS &amp; NOTES

This has implications for ecumenical dialogue in regards to the Jewish faith and even to Eastern Religions. (“In the beginning was the Tao…”). It also has implications for feminist theology: “In the beginning was Sophia, and Sophia was with God, and Sophia was God”. We have such a wonderful tradition. But the thing I want to focus on most today is a thing I already mentioned at the beginning: “The All Mighty God became All Vulnerable” This has personal lifegiving ramifications for me, and I believe for many. I am afraid it continues to be a stumbling block to many as well. I can say this is why I am a Sister of Charity of the Incarnate Word. God finds delight in the human race, not just pleasure but delight! As Sister Ethel mentioned in a prior talk, the 13th Century Franciscan Theologian, Blessed Duns Scotus defined God as &quot;Infinite Love.&quot; He taught that the Incarnation was not required as a payment for sin; it was willed through eternity as an expression of God’s love, and hence God’s desire for consummated union with creation” (Blessed Among Us, by Robert Ellsberg). Yet God knows well our humanity. St. Paul himself describes his own struggles with it: “As to the extraordinary revelations, in order that I might not become conceited, I was given a thorn in the flesh, an angel of Satan to beat me and keep me from getting proud. Three times I begged The Lord that this might leave me. He said to me: My grace is sufficient for you, for My power is made perfect in weakness” (2: Cor. 12: 7-9). A baby, the Infant Jesus, or any baby, is weak, but at the same time has a lot of power. When there is a baby in a room all the attention focuses on it. It calls forth love, yes, but there is something divine in it as well, I think. At the other end of life, I’ve had beautiful experiences of the Divine accompanying the sick and the dying. I am sure you’ve had those too. God’s full embrace of our humanity, with all its weaknesses and strengths, was very liberating to me in the novitiate. I had arrived in the U.S. from Spain marked by a theology of shame, with great emphasis on original sin. I received this negative understanding of the human person at a school run by Opus Dei. I made my first communion at a school of French nuns, but then we moved to a new house and to a new and “better” school. It was a double-edged sword; I breathed negative anthropology there, as well as a great love for prayer, for God. Honestly, I only started to breathe easier and easier in my body when, during novitiate, I had the opportunity to dwell in the riches of our biblical and theological tradition at Aquinas’s Institute of Theology in St. Louis. This liberation culminated during my first 8day retreat at the Grand Coteau Jesuit Spirituality Center, Louisiana, where I felt God accepted and loved me just the way I was. Not when I would reach perfection but just the way I was. This liberation led me to write my own Magnificat praising and thanking God for loving me in my weakness and vulnerability.

In preparing this talk I learned that the word vulnerable comes from the Latin “to wound”. In one of his daily meditations from the Center for Action and Contemplation web page, the Franciscan theologian Richard Rohr asks all of us a question: “Did you ever imagine that what we call “vulnerability” might be just the key to ongoing growth?” He later implies it might well be the path to wholeness and holiness. He affirms, “in my experience healthy vulnerable people use every occasion to expand, change and grow. Yet it is a risky position to live undefended, in a kind of constant openness to the other because it means others could sometimes actually wound us. ..But only if we take this risk do we also allow the other possibility: the other might also gift us, free us and even love us.” (Richard Rohr’s Daily Meditations, 9/27/16). That is true also in my own experience in prayer. When I have risked being open, trusting God’s ways, I have been blessed, graced, healed. This vulnerable mutuality is what the life of the Trinity is, “three “persons perfectly handing themselves over, emptying themselves out, and then fully receiving what has been handed over” (Richard Rohr’s Daily Meditations, 9/27/16). In another of his daily meditations, a few days ago, Richard Rohr further develops this idea: “We like control; God, it seems, loves vulnerability. In fact, if Jesus is the image of God, then God is much better described as Absolute Vulnerability Between Three” than “All-mighty One”(Richard Rohr’s Daily Meditations, March 8, 2017). So, for a change, let me close with a prayer not to our Almighty God but to our All Vulnerable God, and then I am open to your questions, if any: All Vulnerable God, give us Wisdom to embrace our humanity as you did, all of it, ours, those that may be feeling the passing of the years, the sick, the poor, even the rich, those who feel vulnerable because they are undocumented, those who are different from us in any way but with whom we share the same dignity, the dignity you gave us when you became a child. This we ask through the intercession of your most vulnerable disciple, Mary, your Mother and our mother. Amen. September 26, 2021 Addendum: When I wrote this back in 2017, I had not yet experienced my first or second cancer recurrences. I can say I have been experiencing vulnerability at different levels, physical, emotional, and spiritual. At the beginning of my treatment, I sent a message saying I was planning to go through chemotherapy in communion with all the suffering in the world. With COVID, poverty levels have increased around the world, weather disasters have been devastating to many. My plans to live through the treatment in communion with the suffering have been just that, plans. Good intentions. I have been unable to pray most of the time. My communion with the suffering was more in the brokenness I have experienced than anything else. Yet God was there. I have “found” wonderful people to journey with that have blessed me. Providential encounters. Right now, I just came back from a weekend of prayer at Manresa where an 89-year-old Jesuit has been able to help me enkindle the flame of God´s love in me again. God´s hand has always been there; but I did not see it, God´s Word was there but I was deaf to it. Blessed be God who can melt hearts of stone! Most grateful for your prayers and support. NEWS &amp; NOTES

BLOOM WHERE YOU ARE PLANTED PHOTO BY SR. JENNIFER CHINELO OKWUAKA

SR. ROSANNE HONORED AS FAITHFUL CITIZEN BY UST&#39;S NESTI CENTER FOR FAITH AND CULTURE Sister Rosanne Popp, CCVI, M.D., director of CHRISTUS St. Mary&#39;s Clinic, was honored for being a &quot;Faithful Citizen&quot; at the Donald F. Nesti Center for Faith &amp; Culture at the University of St. Thomas on October 7. Held at the Houston Country Club, the award was bestowed during the annual Faithful Citizenship Dinner, billed as an evening of fellowship and inspiration celebrating Houston&#39;s Good Samaritans, a theme taken from Pope Francis&#39; social encyclical Fratelli tutti. The Center for Faith and Culture says the annual Faithful Citizen award &quot;is conferred upon persons who are led by the Holy Spirit, and who manifest the Incarnate Love of God for this world in their lives and actions as Catholics. Their experience of the Love of God, and the way it flows through their attitudes and actions, is made real in the contributions that they make to civic, economic, political, and social dimensions of the way of life that “We the People” share as citizens of our democratic republic, the United States of America,&quot; according to the Center.

Mayor Sylvester Turner, who was in attendance, took the opportunity to proclaim October 7 as Sr. Rosanne Popp Day. She shared the spotlight with her fellow honorees CFHC Life Director Stan Marek and Larry Payne, a community activist. The three awardees were given a framed Papal Blessings from Pope Francis as well as a medal depicting an engraving of an image of the Good Samaritan usually only given to members of the Vatican diplomatic corps. In bestowing the award on Sr. Rosanne, Fr. Donald Nesti said that to meet her is to &quot;know that you are encountering someone filled and on fire with the Spirit of God – purely indefatigable energy of Love.&quot; Sr. Rosanne will speak at UST on Fratelli Tutti and her ministry in healthcare on Nov. 18. To see a beautiful video of the award and hear Sr. Rosanne speak click here NEWS &amp; NOTES

“PATIENCE IS THE COMPANION OF WISDOM.” ST. AUGUSTINE OF HIPPO

Sisters Adelwisa Pineda Leonida and Maureen Costello went on a pilgrimage to the Knock Shrine, in Co. Mayo, Ireland, on Wednesday, October 6th, 2021. They remembered the Sisters in the Congregation, and all those with special needs in their prayers. Sisters of Charity of the Incarnate Word, Houston, TX