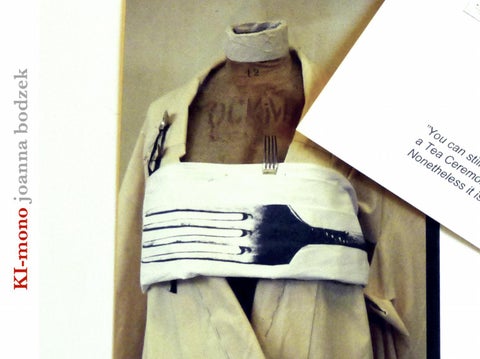 â&amp;#x20AC;?You can still see on the streets, groups of women in kimono going silently to attenda Tea Ceremony; or young people, dressed in kimono for particular occasions. Nonetheless it is becoming ever rarer...â&amp;#x20AC;?

KI-MONO Reconstruction aims at re-designing something so Japanese and untouched as a kimono-garment. To create new aesthetics and ideals of beauty. a platform for both the cultures to meet. Becomes here a canvas on which to paint freely and unrestricted, to combine western and eastern cultural aspects, visual traditions, roots, preferences and ideals of beauty while creating a new space beyond East and West. The word Kimono means &quot;an item to wear&quot;. WHAT do You wear?

Ki-mono NATURE September 11, 2011 Ă&amp;#x2013;stasiatiska MusĂŠet/ Asienfestival at Skeppsholmen Performance in the Autumn mist The Kimono Nature. Is a textil-and-movement instalation with the roots in Butoh Dance.

celebrating cracks and crevices and all the other marks that time, weather, and loving use leave behind. to reminds us that we are all but transient beings on this planet-that our bodies as well as the material world around us are in the process of returning to the dust from which we came. Through wabi-sabi, we embrace liver spots, rust, and frayed edges, and the march of time they represent.

The word Kimono means &quot;an item to wear&quot;. WHAT do you wear? A body painted in white puts ond a Kimono printed in plates, silverware and foods. A kimono made out of kitchen towels floats in space. Space and empty space, a new space beyond east and west and beyond the kitchen, the clothes and femininity... 24

eva and ira thrilled as we have just received a beautifill gift from Petra Holmberg, Curator at The Museum of Far Eastern Antiquities (center)and are just preparing for hanging 4 metrs long kimono pattern! printed on silk.

lots of plates of course

Breakfast in the Open Air, performance at the opening of the kimono Experience Exhibition

Exhibition cards with plates and foods

A ki-mono printed in plates, silverware and foods 30

joanna and ira building a green meditaive place for inner dance sourounded by a sound of lives and birds composed specialy for the ocasion by per wedin. 31

detail from under-kimono to Tsunami kimono

TSUNAMI ki-mono do not want to be finished

to make this gorgeous large and small kimono-becoming-interior piece eva has stitched together, around 55 old handwoven kitchen towels, by hand

studied for years but was unable to find enlightenment. One night, she was carrying an old pail filled with water watching the full moon reflected in the water. Suddenly, the bamboo strips that held the pail together broke the water rushed out the moonâ&amp;#x20AC;&amp;#x2122;s reflection disappeared and Chiyono became enlightened. She said:

This way and that way I tried to keep the pail together, hoping the weak bamboo would never brake.

duplicating half size stands for half size ki-mono

.... in such a wild and desolate spot... This ki-mono is a memory recycling piece, The Yarns that I have collected from different countries where used for this work and i think this come across as a feeling of madness that surrounds this garment.... It was such a great fun and so much Wilderness inside and outside! The story is still unfolding.

eva is behand the camera and irina in front 40

&quot;Hase-Hime, do you know that your mother cannot live any longer? Though I die, you must grow up a good girl. Perhaps your father will marry again and some one will fill my place as your mother. If so do not grieve for me, but look upon your father&#39;s second wife as your true mother, and be obedient and filial to both her and your father. Remember when you are grown up to be submissive to those who are your superiors, and to be kind to all those who are under you. Don&#39;t forget this. I die with the hope that you will grow up a model woman.&quot; 41

Hase-Hime listened while her mother spoke, and promised to do as she was told. &quot;And so Hase- Hime grew up as her mother had wished, a good and obedient little Princess, though she was not too young to understand how great was the loss of her mother. Not long after the death of his first wife, Prince Toyonari married again, a lady of noble birth named Princess Terute. â&amp;#x20AC;Ś.

The Story of Princess Hase, a Story of Old Japan

KH+ exhibition april 2012 Selected renowed artists of Konsthantverkarna and international guest artists exhibited their work in Stockholm Subway to show the vast diversity and influence of craft. The use of the latest technology helped to push the boundaries by creating an exciting mixture of tradition and technology. Information about the exhibition and its designers was available through a website and smart phone app, enablelig pass-byers to scan the OCR code on the windows and receive information directly onto their smartphones. Artist and showcased objects were connected to the social media like twitter and Facebook, so that everyone culd post and tweet their favourite design.

Is a true recycling project . Here are recycled my old friendships, dreams, lovers, memories, old stock of fabrics, vintage hand made towels and laces equal to 1000ths of hours of neeidle work,â&amp;#x20AC;Ś Only found, donated or collected materials are used, like tablecloth-wedding-presents, vintage textiles hand made by women, antique table cloth, handwoven vintage Tea towels, crochet table coverings of all kind along with old stock of yarns collected from several counties around the world.

THIS INDEED are textiles with stories woven into fibres.

Make your own origami kimono

coming exhibion is in

7 August - 7 September 2012 The Exhibition is an exploration of human identity. Where and why one perceives as “ALLY” and how is built the inside border that separate “US” from “OTHERS”? Each participant will share his experience of entering in foreign area and becoming an “ally” there.

JOANNA BODZEK a fashion and textile artist. She works on the edge between fashion and art. She is researching cross cultural issues and home related emotional states as well as the symbolism of colour and its impact on the human body and mind from the philosophical, psychological and emotional point of view. This research has resulted in a series of conceptual projects and experiments. Since December 2009 she is engaged in a work on the subject of a cross cultural nature the KI-MONO RECONSTRUCTION.

KI-MONO westernism to japanism, a ”ki” reconstruction KI-MONO Reconstruction aims at re-designing something so Japanese and untouched as a kimono-garment. To create new aesthetics and ideals of beauty. a platform for both the cultures to meet. Becomes here a canvas on which to paint freely and unrestricted, to combine western and eastern cultural aspects, visual traditions, roots, preferences and ideals of beauty while creating a new space beyond East and West. The word Kimono means "an item to wear". WHAT do You wear? 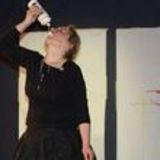