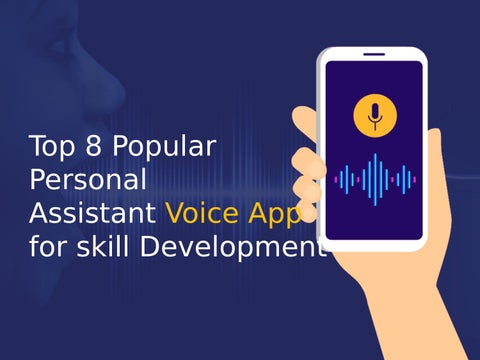 Introduction A personal assistant or virtual assistant is a software agent which perform tasks over a voice command or questions. By 2023, estimates suggest that around eight billion digital voice assistants (a number roughly equal to the worldâ&#x20AC;&#x2122;s population) will be in use globally. (source)

Amazon Alexa • Alexa Skill Development was done by Amazon in 2014. • First used in Amazon Echo and Amazon Echo Dot smart speakers. • Available in 10 languages including English. • Alexa is available in 42 countries until October 2019. • Capable of setting alarms, making a to-do list, voice interaction and much more.

Siri • Siri was developed by Apple in 2011. • Available in around 70 languages worldwide. • Available in more than 35 countries • First used in iPhone 4S after that it became an integral part of Apple devices. • Supports vast span of commands like setting up a reminder, searching on the internet, sports score announcement and much more.

Cortana • Cortana was developed by Microsoft in 2014. • Available in around 9 languages. • First used for Windows 10. • It is available in 14 countries. • Cortana can set reminders, web search, recognise the natural voice. • Microsoft is removing Cortana from Android and iOS on January 31, 2020.

Hound • Hound was developed by Keyvan Mohajer. • It is available in more than 9 countries. • Works on both Android and iOS platforms. • Hound is really fast, accurate and can handle complex queries.

Bixby • Bixby was developed by Samsung in 2017. • Available in around 8 languages • Available in more than 200 countries worldwide. • Bixby represents a major reboot for S Voice. •It is available for Android and Tizen operating systems.

Lyra Virtual Assistant • Lyra was developed by Artificial Solutions in 2013. • It was marketed as Indigo until 2017. • Lyra can translate into approximately 70 languages. • Lyra uses cross-platform functionality. • It is available for Android and iOS.

Viv • Viv was developed by Viv Labs on May 9, 2016 • In October 2016 it was acquired by Samsung Electronics. • It can handle more complex queries than Siri. • Viv software’s platform is open and allows external plug-ins.

To contact, please write us at sales@brsoftech.com or for the quick response call us

A personal assistant or virtual assistant is a software agent which perform tasks over a voice command or questions. BR Softech is one of t...

A personal assistant or virtual assistant is a software agent which perform tasks over a voice command or questions. BR Softech is one of t...