The Story of Santa's Beard 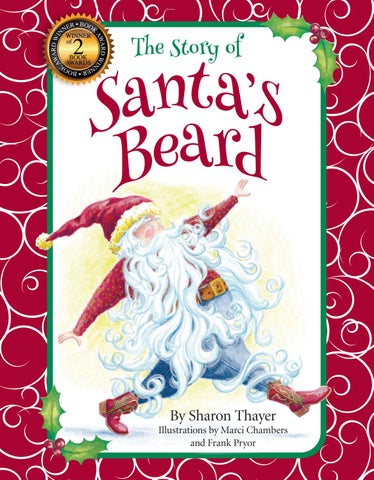 By Sharon Thayer Illustrations by Marci Chambers and Frank Pryor

This book is dedicated to those who believe in hope, in dreams, and in Santa Claus. To my family, friends, and all the encouraging people along my path, thank you for believing in me!

By Sharon Thayer Illustrations by Marci Chambers and Frank Pryor

Santaâ&amp;#x20AC;&amp;#x2122;s beard is white as the North Pole snow. And when little boys and girls are good,

well, that beard of his, it starts to grow.

It grows a little when you play fair and every day you remember to share.

It grows more when you help in special ways and make someone smile every day.

It twists and curls down his chest, when you work hard to do your best.

It grows when you do as you’ve been told and respect people who’ve grown wise and old.

oh, how Santa loves when it grows that way.

It grows a lot as you help around the house

and are very quiet when someoneâ&amp;#x20AC;&amp;#x2122;s sleeping on the couch.

It grew down past his belt when you learned that winning isnâ&amp;#x20AC;&amp;#x2122;t all,

and to get up and try again, every time you fall.

It grew all night and kept Santa awake, the day you learned to give more than you take.

When you did that job without pay, the work was hard, but you did it anyway.

With so many good girls and boys,

Long curls of beard tangled ‘round his boots as he walked, and it got so heavy, he could hardly even talk. Santa did not know what to do – he loved his beard. It reminded him how good you’d been all through the year.

Late one night, every single elf and Mrs. Claus too, had a secret meeting to figure out what to do.

ORDER TODAY to find out what happens to Santaâ&amp;#x20AC;&amp;#x2122;s long beard and discover the special gift included in the book! www.Carousel-Publishing.com

The Story of Santa's Beard