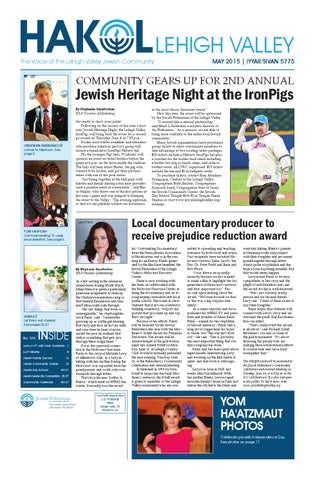 COMMUNITY GEARS UP FOR 2ND ANNUAL

Jewish Heritage Night at the IronPigs By Stephanie Smartschan JFLV Director of Marketing Get ready to show your pride! Following on the success of last year’s firstever Jewish Heritage Night, the Lehigh Valley IronPigs will bring back the event for a second go-round on Thursday, June 4, at 7:05 p.m. Kosher food will be available, and attendees who purchase tickets as part of a group will receive a brand-news IronPigs Hebrew hat. For the younger Pigs fans, PJ Library will sponsor an event for ticket holders before the game at 6 p.m. on the lawn inside the stadium. The kids will hear about Baxter, the pig who wanted to be kosher, and get their pictures taken with one of the pork racers. “Just being together at the ball park with friends and family having a fun time provides such a positive sense of community,” said Barry Halper, who threw one of the first pitches at last year’s game and was integral to bringing the event to the Valley. “The evening epitomizes that we can publicly exhibit our Jewishness

As a Jew serving in the American armed forces during World War II, Julian Stern was given a particularly gruesome assignment: to clean up the Ohrdruf concentration camp so that General Eisenhower and General Patton could walk through. “He saw things that were so unimaginable,” his stepdaughter, Jaccii Farris, said. “I remember growing up as a little girl hearing that story and how he lost his faith and over time he kind of reconnected because he realized that faith is something that gets you through these tough times.” It was this personal connection to the Holocaust that drew Farris to the story of Michelle Levy of Allentown, who, as a baby in hiding with her mother during the Holocaust, was separated from her grandparents and could only communicate through letters. That story became “Letters to Frieda,” which aired on WFMZ this winter. It recently won the award Non-Profit Organization

in the most classic American venue.” New this year, the event will be sponsored by the Jewish Federation of the Lehigh Valley. “It seemed like a natural partnership,” said Mark L Goldstein, executive director of the Federation. “As a sponsor, we are able to bring more visibility to the entire local Jewish community.” Many Jewish organizations have purchased group tickets to allow community members to take advantage of two exciting ticket packages. $20 tickets include a Hebrew IronPigs hat plus a voucher for the kosher food stand including a kosher hot dog or knish, chips, and soda or bottled water, all LVKC supervised. $15 tickets include the hat and $2 in ballpark credit. To purchase tickets, contact Bnai Abraham Synagogue, Chabad of the Lehigh Valley, Congregation Brith Sholom, Congregation Keneseth Israel, Congregation Sons of Israel, the Jewish Community Center, the Jewish Day School, Temple Beth El or Temple Shirat Shalom or visit www.jewishlehighvalley.org/ ironpigs.

for “Outstanding Documentary” from the Pennsylvania Association of Broadcasters and is in the running for an Emmy. Funds generated by the film have benefited the Jewish Federation of the Lehigh Valley’s Holocaust Resource Center. Farris is now working with her team, in collaboration with the Holocaust Resource Center, to bring the documentary and an accompanying curriculum into local public schools. She wants to show students that if you see somebody bullying somebody, “why it’s important that you stand up and say that’s not right.” Because of her efforts, Farris will be honored by the Jewish Federation this year with the Mortimer S. Schiff Award for Prejudice Reduction. The award will be acknowledged at the golf tournament also named Schiff on Monday, June 15, at Lehigh Country Club. It will be formally presented the next evening, Tuesday, June 16, at the Federation’s Community Celebration and Annual Meeting. Established in 1999 by Vera Schiff to honor her husband Mortimer’s memory, the Schiff award is given to members of the Lehigh Valley community who are com-

mitted to spreading and teaching tolerance by both word and action. Past recipients have included Holocaust survivor Julius Jacobs, the Rev. Dr. Peter Pettit and Ilene and Bob Wood. “I was blown away really honestly because we just wanted to make a film to highlight the last generation of Holocaust survivors and how important it is,” Farris said upon hearing about the award. “We were focused on that, so this was a big surprise definitely.” As a senior reporter and docujournalist for WFMZ-TV and president and founder of Julian Farris Films – named for her stepfather, of blessed memory – Farris had a long list of suggestions for topics to tackle, but “this one just stood out,” she said. “This is probably the most important thing that our film company has done.” Farris and her team spent about eight months interviewing Levy and working on the film before it aired, and that work is still ongoing. Levy was born in 1938, just weeks after Kristallnacht. With her mother Frieda, Levy escaped from her family’s home in Paris just before the city fell to the Nazis and

went into hiding. Frieda’s parents in Germany could only connect with their daughter and yet unmet granddaughter through letters, which spoke of optimism and the hope of one day being reunited. But that would never happen. Levy found Farris to be very sympathetic to her story and the plight of anti-Semitism and said the award for her is well-deserved. “She’s just a lovely, lovely person and we became friends,” Levy said. “I kind of think of her as my other daughter.” Farris hopes that students will connect with Levy’s story and understand the perils that discrimination can inflict. “That’s really what this award is all about,” said Richard Schiff, Mortimer’s son and co-chair of the golf tournament. “It’s about honoring the people who are making these extraordinary efforts to combat hate and Jaccii truly exemplifies that.” The Schiff Award will be presented at the Jewish Federation’s Community Celebration and Annual Meeting on Tuesday, June 16, at 6:30 p.m. at the JCC of Allentown. It is free and open to the public. To learn more, visit www.jewishlehighvalley.org.