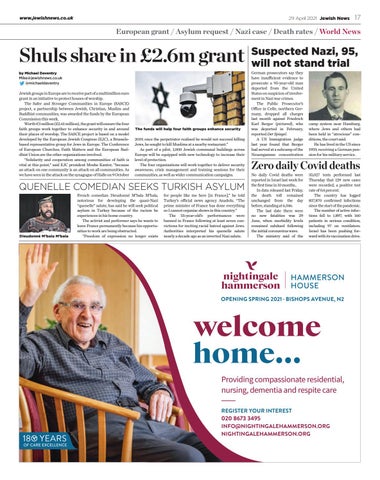 Jewish groups in Europe are to receive part of a multimillion euro grant in an initiative to protect houses of worship. The Safer and Stronger Communities in Europe (SASCE) project, a partnership between Jewish, Christian, Muslim and Buddhist communities, was awarded the funds by the European Commission this week. Worth €3 million (£2.61 million), the grant will ensure the four faith groups work together to enhance security in and around their places of worship. The SASCE project is based on a model developed by the European Jewish Congress (EJC), a Brusselsbased representative group for Jews in Europe. The Conference of European Churches, Faith Matters and the European Buddhist Union are the other organisations involved. “Solidarity and cooperation among communities of faith is vital at this point,” said EJC president Moshe Kantor, “because an attack on one community is an attack on all communities. As we have seen in the attack on the synagogue of Halle on 9 October

2019, once the perpetrator realised he would not succeed killing Jews, he sought to kill Muslims at a nearby restaurant.” As part of a pilot, 1,000 Jewish communal buildings across Europe will be equipped with new technology to increase their level of protection. The four organisations will work together to deliver security awareness, crisis management and training sessions for their communities, as well as wider communication campaigns.

French comedian Dieudonné M’bala M’bala, notorious for developing the quasi-Nazi “quenelle” salute, has said he will seek political asylum in Turkey because of the racism he experiences in his home country. The activist and performer says he wants to leave France permanently because his opportunities to work are being obstructed. “Freedom of expression no longer exists

for people like me here [in France],” he told Turkey’s official news agency Anadolu. “The prime minister of France has done everything so I cannot organise shows in this country.” The 55-year-old’s performances were banned in France following at least seven convictions for inciting racial hatred against Jews. Authorities interpreted his quenelle salute nearly a decade ago as an inverted Nazi salute.

Suspected Nazi, 95, will not stand trial German prosecutors say they have insufficient evidence to prosecute a 95-year-old man deported from the United States on suspicion of involvement in Nazi war crimes. The Public Prosecutor’s Office in Celle, northern Germany, dropped all charges last month against Friedrich Karl Berger (pictured), who was deported in February, reported Der Spiegel. A US Immigration judge last year found that Berger had served at a subcamp of the Neuengamme concentration

camp system near Hamburg, where Jews and others had been held in “atrocious” conditions, the court said. He has lived in the US since 1959, receiving a German pension for his military service.

No daily Covid deaths were reported in Israel last week for the first time in 10 months.. In data released last Friday, the death toll remained unchanged from the day before, standing at 6,346. The last date there were no new fatalities was 29 June, when morbidity levels remained subdued following the initial coronavirus wave. The ministry said of the

35,027 tests performed last Thursday that 129 new cases were recorded, a positive test rate of 0.4 percent. The country has logged 837,870 confirmed infections since the start of the pandemic. The number of active infections fell to 1,897, with 160 patients in serious condition, including 97 on ventilators. Israel has been pushing forward with its vaccination drive.