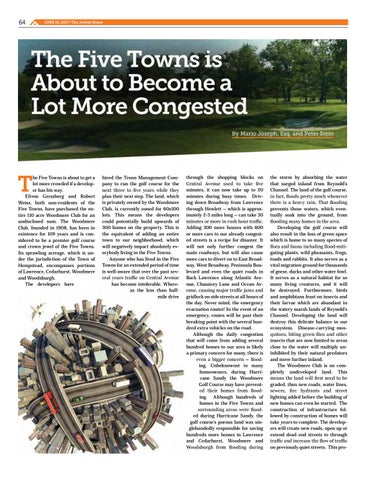 he Five Towns is about to get a lot more crowded if a developer has his way. Efrem Gerszberg and Robert Weiss, both non-residents of the Five Towns, have purchased the entire 110 acre Woodmere Club for an undisclosed sum. The Woodmere Club, founded in 1908, has been in existence for 109 years and is considered to be a premier golf course and crown jewel of the Five Towns. Its sprawling acreage, which is under the jurisdiction of the Town of Hempstead, encompasses portions of Lawrence, Cedarhurst, Woodmere and Woodsburgh. The developers have

hired the Troon Management Company to run the golf course for the next three to five years while they plan their next step. The land, which is privately owned by the Woodmere Club, is currently zoned for 60x100 lots. This means the developers could potentially build upwards of 300 homes on the property. This is the equivalent of adding an entire town to our neighborhood, which will negatively impact absolutely everybody living in the Five Towns. Anyone who has lived in the Five Towns for an extended period of time is well-aware that over the past several years traffic on Central Avenue has become intolerable. Whereas the less than halfmile drive

through the shopping blocks on Central Avenue used to take five minutes, it can now take up to 20 minutes during busy times. Driving down Broadway from Lawrence through Hewlett – which is approximately 2-3 miles long – can take 30 minutes or more in rush hour traffic. Adding 300 more houses with 600 or more cars to our already congested streets is a recipe for disaster. It will not only further congest the main roadways, but will also cause more cars to divert on to East Broadway, West Broadway, Peninsula Boulevard and even the quiet roads in Back Lawrence along Atlantic Avenue, Chauncey Lane and Ocean Avenue, causing major traffic jams and gridlock on side streets at all hours of the day. Never mind, the emergency evacuation routes! In the event of an emergency, routes will be past their breaking point with the several hundred extra vehicles on the road. Although the daily congestion that will come from adding several hundred homes to our area is likely a primary concern for many, there is even a bigger concern – flooding. Unbeknownst to many homeowners, during Hurricane Sandy the Woodmere Golf Course may have prevented their homes from flooding. Although hundreds of homes in the Five Towns and surrounding areas were flooded during Hurricane Sandy, the golf course’s porous land was singlehandedly responsible for saving hundreds more homes in Lawrence and Cedarhurst, Woodmere and Woodsburgh from flooding during

the storm by absorbing the water that surged inland from Reynold’s Channel. The land of the golf course, in fact, floods pretty much whenever there is a heavy rain. That flooding prevents those waters, which eventually soak into the ground, from flooding many homes in the area. Developing the golf course will also result in the loss of green space which is home to so many species of flora and fauna including flood-mitigating plants, wild pheasants, frogs, toads and rabbits. It also serves as a vital migration ground for thousands of geese, ducks and other water fowl. It serves as a natural habitat for so many living creatures, and it will be destroyed. Furthermore, birds and amphibians feast on insects and their larvae which are abundant in the watery marsh lands of Reynold’s Channel. Developing the land will destroy this delicate balance in our ecosystem. Disease-carrying mosquitoes, biting green flies and other insects that are now limited to areas close to the water will multiply uninhibited by their natural predators and move further inland. The Woodmere Club is on completely undeveloped land. This means the land will first need to be graded, then new roads, water lines, sewers, fire hydrants and street lighting added before the building of new homes can even be started. The construction of infrastructure followed by construction of homes will take years to complete. The developers will create new roads, open up or extend dead end streets to through traffic and increase the flow of traffic on previously quiet streets. This pro-