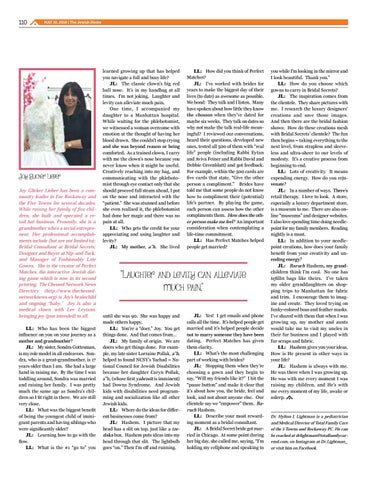 Joy Glicker Lieber Joy Glicker Lieber has been a community leader in Far Rockaway and the Five Towns for several decades. While raising her family of five children, she built and operated a retail hat business. Presently, she is a grandmother who’s a serial entrepreneur. Her professional accomplishments include (but are not limited to): Bridal Consultant at Bridal Secrets; Designer and Buyer at Nip-and-Tuck; and Manager of Fashionably Late Gowns. She is the creator of Perfect Matches, the interactive Jewish dating game which is now in its second printing. The Chessed Network News Directory (http://www.thechessednetworknews.org) is Joy’s brainchild and ongoing “baby.” Joy is also a medical clown with Lev Leytzan, bringing joy (pun intended) to all. LL: Who has been the biggest influence on you on your journey as a mother and grandmother? JL: My sister, Sondra Gottesman, is my role model in all endeavors. Sondra, who is a great-grandmother, is 17 years older than I am. She had a large hand in raising me. By the time I was toddling around, Sondra was married and raising her family. I was pretty much the same age as Sondra’s children so I fit right in there. We are still very close. LL: What was the biggest benefit of being the youngest child of immigrant parents and having siblings who were significantly older? JL: Learning how to go with the flow. LL: What is the #1 “go to” you

learned growing up that has helped you navigate a full and busy life? JL: The classic clown’s big red ball nose. It’s in my handbag at all times. I’m not joking. Laughter and levity can alleviate much pain. One time, I accompanied my daughter to a Manhattan hospital. While waiting for the phlebotomist, we witnessed a woman overcome with emotion at the thought of having her blood drawn. She couldn’t stop crying and she was beyond reason or being comforted. As a trained clown, I carry with me the clown’s nose because you never know when it might be useful. Creatively reaching into my bag, and communicating with the phlebotomist through eye contact only that she should proceed full steam ahead, I put on the nose and interacted with the “patient.” She was stunned and before she even realized it, the phlebotomist had done her magic and there was no pain at all. LL: Who gets the credit for your appreciating and using laughter and levity? JL: My mother, a”h. She lived

LL: How did you think of Perfect Matches? JL: I’ve worked with brides for years to make the biggest day of their lives (to date) as awesome as possible. We bond: They talk and I listen. Many have spoken about how little they know the chosson when they’ve dated for maybe six weeks. They talk on dates so why not make the talk real-life meaningful? I reviewed our conversations, heard their questions, developed new ones, tested all 500 of them with “real life” people (including Rabbi Eytan and Aviva Feiner and Rabbi David and Debbie Greenblatt) and got feedback. For example, within the 500 cards are five cards that state, “Give the other person a compliment.” Brides have told me that some people do not know how to compliment their (potential) life’s partner. By playing the game, each person can assess how the other compliments them. How does the other person make me feel? An important consideration when contemplating a life-time commitment. LL: Has Perfect Matches helped people get married?

"Laughter and levity can alleviate much pain." until she was 90. She was happy and made others happy. LL: You’re a “doer,” Joy. You get things done. And that comes from… JL: My family of origin. We are doers who get things done. For example, my late sister Lorraine Pollak, a”h, helped to found NCSY’s Yachad – National Council for Jewish Disabilities because her daughter Caryn Pollak, a”h, (whose first yahrzeit is imminent) had Downs Syndrome. And Jewish kids with disabilities need programming and socialization like all other Jewish kids. LL: Where do the ideas for different businesses come from? JL: Hashem. I picture that my head has a slit on top, just like a tzedaka box. Hashem puts ideas into my head through that slit. The lightbulb goes “on.” Then I’m off and running.

JL: Yes! I get emails and phone calls all the time. It’s helped people get married and it’s helped people decide not to marry someone they have been dating. Perfect Matches has given them clarity. LL: What’s the most challenging part of working with brides? JL: Stopping them when they’re choosing a gown and they begin to say, “Will my friends like it?” I hit the “pause button” and make it clear that it’s about how you, the bride, feel and look, and not about anyone else. Our clientele say we “empower” them. Baruch Hashem. LL: Describe your most rewarding moment as a bridal consultant. JL: A Bridal Secret bride got married in Chicago. At some point during her big day, she called me, saying, “I’m holding my cellphone and speaking to

you while I’m looking in the mirror and I look beautiful. Thank you.” LL: How do you choose which gowns to carry in Bridal Secrets? JL: The inspiration comes from the clientele. They share pictures with me. I research the luxury designers’ creations and save those images. And then there are the bridal fashion shows: How do these creations mesh with Bridal Secrets’ clientele? The fun then begins – taking everything to the next level, from strapless and sleeveless and ultra-sheer to our levels of modesty. It’s a creative process from beginning to end. LL: Lots of creativity. It means expending energy. How do you rejuvenate? JL: In a number of ways. There’s retail therapy. I love to look. A store, especially a luxury department store, is a museum to me. There are also online “museums” and designer websites. I also love spending time doing needlepoint for my family members. Reading nightly is a must. LL: In addition to your needlepoint creations, how does your family benefit from your creativity and unending energy? JL: Baruch Hashem, my grandchildren think I’m cool. No one has tefillin bags like theirs. I’ve taken my older granddaughters on shopping trips to Manhattan for fabric and trim. I encourage them to imagine and create. They loved trying on funky-colored boas and feather masks. I’ve shared with them that when I was growing up, my mother and aunts would take me to visit my uncles in their fur business and I played with fur scraps and fabric. LL: Hashem gives you your ideas. How is He present in other ways in your life? JL: Hashem is always with me. He was there when I was growing up. He was with me every moment I was raising my children, and He’s with me every moment of my life, awake or asleep.

Dr. Hylton I. Lightman is a pediatrician and Medical Director of Total Family Care of the 5 Towns and Rockaway PC. He can be reached at drlightman@totalfamilycaremd.com, on Instagram at Dr.Lightman_ or visit him on Facebook.