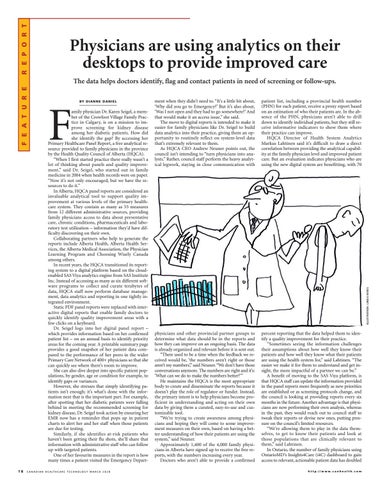 Physicians are using analytics on their desktops to provide improved care

amily physician Dr. Karen Seigel, a member of the Crowfoot Village Family Practice in Calgary, is on a mission to improve screening for kidney disease among her diabetic patients. How did she identify the gap? By accessing her Primary Healthcare Panel Report, a free analytical resource provided to family physicians in the province by the Health Quality Council of Alberta (HQCA). “When I first started practice there really wasn’t a lot of thinking about panels and quality improvement,” said Dr. Seigel, who started out in family medicine in 2004 when health records were on paper. “Now it’s not only encouraged, but we have the resources to do it.” In Alberta, HQCA panel reports are considered an invaluable analytical tool to support quality improvement at various levels of the primary healthcare system. They contain as many as 55 measures from 12 different administrative sources, providing family physicians access to data about preventative care, chronic conditions, pharmaceuticals and laboratory test utilization – information they’d have difficulty discovering on their own. Collaborating partners who help to generate the reports include Alberta Health, Alberta Health Services, the Alberta Medical Association, the Physician Learning Program and Choosing Wisely Canada among others. In recent years, the HQCA transitioned its reporting system to a digital platform based on the cloudenabled SAS Viya analytics engine from SAS Institute Inc. Instead of accessing as many as six different software programs to collect and curate terabytes of data, HQCA staff now perform database management, data analytics and reporting in one tightly integrated environment. Static PDF panel reports were replaced with interactive digital reports that enable family doctors to quickly identify quality improvement areas with a few clicks on a keyboard. Dr. Seigel logs into her digital panel report – which provides information based on her confirmed patient list – on an annual basis to identify priority areas for the coming year. A printable summary page provides a good snapshot of her patient data compared to the performance of her peers in the wider Primary Care Network of 400+ physicians so that she can quickly see where there’s room to improve. She can also dive deeper into specific patient populations, by gender, age or condition for example, to identify gaps or variances. However, she stresses that simply identifying patients isn’t enough; it’s what’s done with the information next that is the important part. For example, after spotting that her diabetic patients were falling behind in meeting the recommended screening for kidney disease, Dr. Seigel took action by ensuring her EMR now has a reminder that pops up in patient charts to alert her and her staff when those patients are due for testing. Similarly, if she identifies at-risk patients who haven’t been getting their flu shots, she’ll share that information with administrative staff who can follow up with targeted patients. One of her favourite measures in the report is how many times a patient visited the Emergency Depart-

ment when they didn’t need to. “It’s a little bit about, ‘Why did you go to Emergency?’ But it’s also about, ‘Was I not open and they had to go somewhere?’ And that would make it an access issue,” she said. The move to digital reports is intended to make it easier for family physicians like Dr. Seigel to build data analytics into their practice, giving them an opportunity to routinely reflect on system-level data that’s extremely relevant to them. As HQCA CEO Andrew Neuner points out, the council isn’t intending to “turn physicians into analysts.” Rather, council staff perform the heavy analytical legwork, staying in close communication with

patient list, including a provincial health number (PHN) for each patient, receive a proxy report based on an estimation of who their patients are. In the absence of the PHN, physicians aren’t able to drill down to identify individual patients, but they still receive informative indicators to show them where their practice can improve. HQCA Director of Health System Analytics Markus Lahtinen said it’s difficult to draw a direct correlation between providing the analytical capability at the family physician level and improved patient care. But an evaluation indicates physicians who are using the new digital system are benefitting, with 70

physicians and other provincial partner groups to determine what data should be in the reports and how they can improve on an ongoing basis. The data is already organized and relevant before it is sent out. “There used to be a time when the feedback we received would be, ‘the numbers aren’t right or those aren’t my numbers’,” said Neuner. “We don’t have those conversations anymore. The numbers are right and it’s: ‘What can we do to make the numbers better?’” He maintains the HQCA is the most appropriate body to create and disseminate the reports because it doesn’t play the role of regulator or funder. Instead, the primary intent is to help physicians become proficient in understanding and acting on their own data by giving them a curated, easy-to-use and customizable tool. “We’re trying to create awareness among physicians and hoping they will come to some improvement measures on their own, based on having a better understanding of how their patients are using the system,” said Neuner. Approximately 1,400 of the 4,000 family physicians in Alberta have signed up to receive the free reports, with the numbers increasing every year. Doctors who aren’t able to provide a confirmed

percent reporting that the data helped them to identify a quality improvement for their practice. “Sometimes seeing the information challenges their assumptions about how well they know their patients and how well they know what their patients are using the health system for,” said Lahtinen. “The easier we make it for them to understand and get insight, the more impactful of a partner we can be.” A benefit of moving to the SAS Viya platform, is that HQCA staff can update the information provided in the panel reports more frequently as new priorities are established or as screening protocols change, and the council is looking at providing reports every six months in the future. Another advantage is that physicians are now performing their own analysis, whereas in the past, they would reach out to council staff to tweak their reports or devise new ones, putting pressure on the council’s limited resources. “We’re allowing them to play in the data themselves, to get to know their patients and look at those populations that are clinically relevant to them,” said Lahtinen. In Ontario, the number of family physicians using OntarioMD’s Insights4Care (i4C) dashboard to gain access to relevant, actionable patient data has doubled

The data helps doctors identify, flag and contact patients in need of screening or follow-ups. 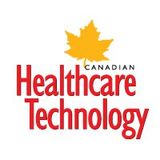