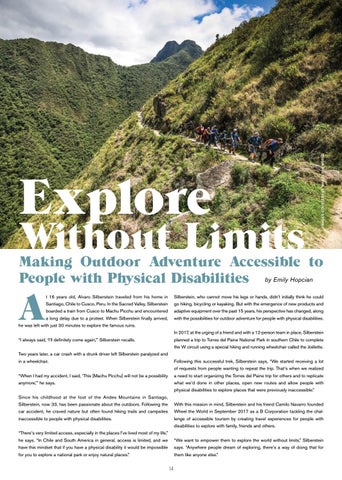 t 16 years old, Alvaro Silberstein traveled from his home in

Silberstein, who cannot move his legs or hands, didn&#39;t initially think he could

Santiago, Chile to Cusco, Peru. In the Sacred Valley, Silberstein

go hiking, bicycling or kayaking. But with the emergence of new products and

boarded a train from Cusco to Machu Picchu and encountered

adaptive equipment over the past 15 years, his perspective has changed, along

a long delay due to a protest. When Silberstein finally arrived,

with the possibilities for outdoor adventure for people with physical disabilities.

he was left with just 30 minutes to explore the famous ruins. In 2017, at the urging of a friend and with a 12-person team in place, Silberstein

Two years later, a car crash with a drunk driver left Silberstein paralyzed and in a wheelchair.

Following this successful trek, Silberstein says, “We started receiving a lot of requests from people wanting to repeat the trip. That’s when we realized

“When I had my accident, I said, ‘This [Machu Picchu] will not be a possibility

what we’d done in other places, open new routes and allow people with physical disabilities to explore places that were previously inaccessible.”

Since his childhood at the foot of the Andes Mountains in Santiago, Silberstein, now 33, has been passionate about the outdoors. Following the

With this mission in mind, Silberstein and his friend Camilo Navarro founded

inaccessible to people with physical disabilities.

lenge of accessible tourism by creating travel experiences for people with disabilities to explore with family, friends and others.

“There’s very limited access, especially in the places I’ve lived most of my life,” he says. “In Chile and South America in general, access is limited, and we

“We want to empower them to explore the world without limits,” Silberstein

says. “Anywhere people dream of exploring, there’s a way of doing that for

for you to explore a national park or enjoy natural places.” 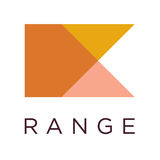