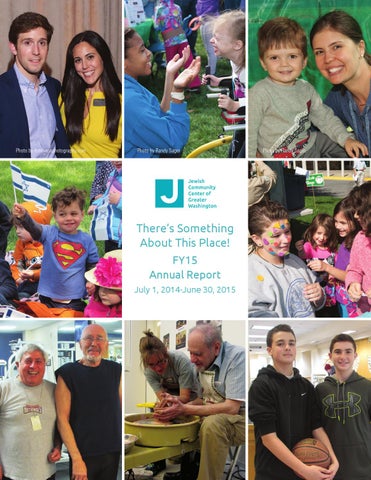 The support that our generous donors provide has a direct and EDUCATION immediate impact on the lives of so many individuals and families in our community. Here are some highlights from FY15:

special needs enjoy a summer camp experience alongside their typicallydeveloping siblings and friends.

served to help meet the nutritional needs of 300 senior adults.

who meet at the JCCGW each Sunday

in our men and women’s discussion groups together to attend

in spin class each week

The JCCGW embraces and welcomes the diversity of our community and encourages everyone to seek meaning and fulfillment by participating in our rich programming inspired by our Jewish heritage. We open our doors to everyone, including people of all backgrounds, religions, abilities and sexual orientations, and interfaith couples and families. Inclusion permeates our Center. Inclusion is belonging.

We create a welcoming and inclusive environment, connecting the people of our Jewish community with each other, Israel and the broader community. We inspire individuals of all ages and backgrounds to enhance their social, physical, intellectual and spiritual well-being through programs of excellence rooted in Jewish values.

We will be the heart of our Jewish community, playing a central role in reaching out to build a welcoming, diverse and thriving community that enriches Jewish life for each generation.

• Kavod Ha-briot (Respect for one another) We respect the dignity of every person. • Klal Yisrael (One people) We welcome all Jewish traditions and backgrounds. • Kehilla (Community) We connect individuals to the community and communities to each other. • Eretz Y’israel (Israel) We connect our community to the people, history, culture and land of Israel. • B’yachad (Working together) We partner with Jewish and secular organizations to build a stronger community.

• Hachnassat Orchim (Welcoming guests) We open our doors to everyone. • Gemilut Chasadim (Acts of loving kindness) We help those in need through acts of loving kindness. • Tikkun Olam (Repairing the world) We make the world a better and more just place. • Shmirat Ha-teva (Preserving nature) We respect our environment. • Torah (Jewish Learning) We promote Jewish learning and intellectual enrichment. • Shmirat HaNefesh v’HaGuf (Preserving our selves) We promote the well-being and fitness of every person. • Ruach (Spirit) We infuse spirit and fun into our activities and programs.

Recognizing that values are developed in the early years, our parents believed in the importance of early childhood education, supporting the community, and a living center which embodies Jewish values and culture. 4

The JCCGW is deeply grateful to the Bender Foundation for making a generous gift to establish the Sondra and Howard Bender Early Childhood Center as part of the Centennial Capital Campaign. The Bender family has had an immeasurable impact on the JCC and the community through their volunteer and philanthropic leadership. Naming the early childhood center for Sondraz”l and Howardz”l Bender creates a lasting legacy for generations of young families and children yet to come. Julie Bender Silver, a daughter of Sondra and Howard, says that her family chose to establish the early childhood center to honor and memorialize their parents. “Recognizing that values are developed in the early years, our parents believed in the importance of early childhood education, supporting the community, and a living center which embodies Jewish values and culture,” Julie explains. “This early childhood center will help parents and their children to learn together, socialize, connect and find support from professionals, other parents and community members.”

were offered through our Arts &amp; Culture Department, allowing participants of all ages to pursue interests and broaden horizons.

enrolled in the JCCGW preschool were provided with scholarships, allowing them the opportunity to learn by way of a play-based curriculum infused with Jewish values and traditions.

As a way to create a deeper sense of community in the JCC preschool and a richer Jewish experience, the JCCGW partnered with the Jewish Womenâ&amp;#x20AC;&amp;#x2122;s Renaissance Project (JWRP) to offer a highly-subsidized trip to Israel for moms with children age 18 and younger. The eight-day action-packed trip provides a chance for mothers from around the United States to visit Israel together to learn, tour and bond. They have the opportunity to explore who they are through a Jewish lens, and to discover how Jewish values fit into their lives. Participants return home with a deep and eternal connection to Israel, a profound kinship with each other, and a heart filled with Jewish values.

were served to more than 300 seniors through the Selma Sweetbaum Senior Satellite Program, affording them the opportunity to socialize with peers over a hot nutritious lunch.

spent Good Deeds Day at the Center, working on meaningful projects to help those who are underserved in our county.

Moms who attended the Jewish Womenâ&amp;#x20AC;&amp;#x2122;s Renaissance Project trip to Israel gathered for a photo opportunity on these steps in Tzfat.

Participants return home with a deep and eternal connection to Israel, a profound kinship with each other, and a heart filled with Jewish values. 7

For Mitch Berliner, shown with his wife Debbie, regular swim workouts at the JCC translated to silver and gold at the Pan American Maccabi Games. Inset: Following his events at the Games, Mitch displayed his medals and his pride.

The JCCâ&amp;#x20AC;&amp;#x2122;s programs are wide reaching, from the cerebral to the cultural to the physical.

Debbie and Mitch Berliner have long associations with the JCC. As a child, Debbie was one of the first in a group of teens to volunteer at the Center the year that it opened in Rockville. When she was executive director of a local arts center, she partnered with the JCC to implement after-school programs there. Her children participated in Camp JCC programs. Mitch has been a Center member for three decades, and has served on the board of directors. He swims here regularly and has said that during his workouts, he fantasizes about someday participating in the Maccabiah Games in Israel as a master swimmer in the freestyle event. “Who knows?” he mused. “Maybe someday it will happen…” And in a way, it has happened. Mitch recently participated in the 13th Pan American Maccabi Games in Chile, winning five medals, including a gold medal in the 400-meter freestyle event for swimmers age 65 to 70.

Mitch says that the JCCGW is of paramount importance because it is inclusive to all. “Its programs are wide reaching, from the cerebral to the cultural to the physical.”

were offered each week, including Yoga, Total Body Conditioning, Zumba, BODYPUMP® by Les Mills and Boot Camp, as well as fitness classes for people with Parkinson’s disease.

participated in one or more of our sports programs, including basketball, floor hockey, ga-ga, gymnastics, karate, t-ball and soccer, as well as swim classes, swim lessons and swim clubs.

Debbie and Dan Stillman met as counselors at Camp JCC, although they later discovered that their paths may have crossed years earlier when they both attended the JCC preschool at the same time. Their relationship started as good friends, and now they have been married since 2004 and have two children, Matthew (Matty) and Adam. The Stillman family is still very active at the Center, and Matty and Adam attend Camp JCC. “Dan and I still both have friends we made as counselors at Camp JCC, and we have made many new family friendships via our children’s friends from Camp JCC,” Debbie relates. The couple feels that the JCCGW is a hub of our community, a place where Jews of all backgrounds can come together for recreation, community and friendship. “Along with [our synagogue and our children’s school], the JCCGW is the center of our lives and the place where our children are growing up Jewishly.”

from our JCC attended the 2015 JCC Maccabi Games, bringing home 60 medals, countless memories, and friendships to last a lifetime.

were provided to children to attend Camp JCC, where they bonded with other campers through fun shared experiences.

The JCCGW is a hub of our community, a place where Jews of all backgrounds can come together for recreation, community and friendship. 11

On April 20, we officially launched the public phase of the Centennial Capital Campaign. With $10 million in commitments toward a goal of at least $12 million, the campaign and renovation plans were widely promoted to our members and community for the first time. Why the renovation? In order for us to meet the needs of a changing community and enrich the quality of Jewish life for tomorrow, we must transform our facilities, programs and operations. Heavy daily use of our 46-year-old building for our own programming, as well as for our community partnersâ&amp;#x20AC;&amp;#x2122; programming, finds us in need of significant upgrades and renovations to become a state-of-the-art community center. Our planned building improvements will dramatically enhance the look, function and sustainability of our facility in order to attract a community that deserves excellent programming delivered in high-quality, modern surroundings. In June, we started the first phase of the renovation: upper floor of the preschool, adult classrooms, social hall, art gallery, ceramics studio, art studio, dance studio, kitchen and restrooms. This renovation will transform the Center and our impact on the community for years to come. Because of you, we will ensure a strong Center for Jewish life in Montgomery County that provides meaningful opportunities to build Jewish connections and explore our shared values, culture and heritage.

Before demolition started, members had a chance to write messages on the social hall wall.

Classrooms were packed in preparation for the renovation.

We sincerely thank those who have committed (through June 30, 2015) to being a part of the Centennial Capital Campaign: Visionary – $1,000,000+ The Bender Foundation Sheila &amp; Seymour Herman State of Maryland Smith/Kogod Family

Every effort has been made to ensure the accuracy of this list. We apologize for any omissions or errors. If you have any questions or corrections, please contact Development Director Adam Tennen at 301.348.3815 or atennen@jccgw.org.

In fiscal year 2015, we raised: $414,180 to include individuals with special needs in all of our programs and activities $287,810 to provide senior adults the opportunity to remain active through educational, social and health &amp; wellness programs $125,946 to offer high-quality cultural arts programs to the community $113,321 to provide scholarships to those who otherwise would not have the means to participate

Community support is necessary to ensure that our services are available to all; membership dues and program fees are not enough. Only through the generosity of our donors is it possible for us to welcome and include those who wish to participate but cannot afford to do so. With your help, we can: • grant scholarships to preschool and camp families in need • provide services and support for children and adults with special needs • offer cultural arts programs for the entire community • serve hot kosher meals and host exercise and wellness programs for senior adults • make space available to other community groups at little or no cost

Includes non-cash expenses such as depreciation of $616,000

Thank You We thank all those who supported the JCCGW during fiscal year 2015. Here you will find photos from some of our major events.

Brad Stillman (left), immediate past president of the board of directors, accepted a proclamation from Montgomery County Executive Isiah Leggett. Annual Meeting – June 2, 2015

Nathan and Rebecca Bortnick, Carol and Michael Winer, Mindy and Louis Berger, chairs IMAGINE: A Night Supporting Scholarships at the J May 27, 2015 Photo by rlstevensphotography.com