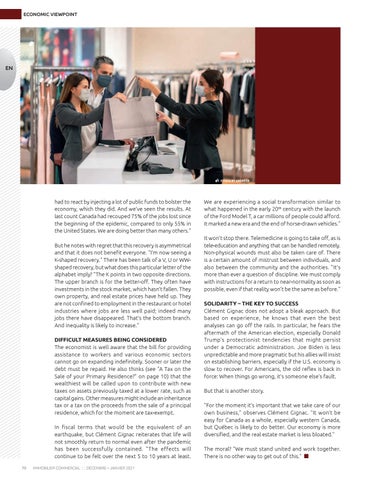 had to react by injecting a lot of public funds to bolster the economy, which they did. And we’ve seen the results. At last count Canada had recouped 75% of the jobs lost since the beginning of the epidemic, compared to only 55% in the United States. We are doing better than many others." But he notes with regret that this recovery is asymmetrical and that it does not benefit everyone. "I’m now seeing a K-shaped recovery." There has been talk of a V, U or WWshaped recovery, but what does this particular letter of the alphabet imply? "The K points in two opposite directions. The upper branch is for the better-off. They often have investments in the stock market, which hasn’t fallen. They own property, and real estate prices have held up. They are not confined to employment in the restaurant or hotel industries where jobs are less well paid; indeed many jobs there have disappeared. That’s the bottom branch. And inequality is likely to increase." DIFFICULT MEASURES BEING CONSIDERED The economist is well aware that the bill for providing assistance to workers and various economic sectors cannot go on expanding indefinitely. Sooner or later the debt must be repaid. He also thinks (see "A Tax on the Sale of your Primary Residence?" on page 10) that the wealthiest will be called upon to contribute with new taxes on assets previously taxed at a lower rate, such as capital gains. Other measures might include an inheritance tax or a tax on the proceeds from the sale of a principal residence, which for the moment are tax-exempt. In fiscal terms that would be the equivalent of an earthquake, but Clément Gignac reiterates that life will not smoothly return to normal even after the pandemic has been successfully contained. "The effects will continue to be felt over the next 5 to 10 years at least. 70

We are experiencing a social transformation similar to what happened in the early 20th century with the launch of the Ford Model T, a car millions of people could afford. It marked a new era and the end of horse-drawn vehicles." It won’t stop there. Telemedicine is going to take off, as is tele-education and anything that can be handled remotely. Non-physical wounds must also be taken care of. There is a certain amount of mistrust between individuals, and also between the community and the authorities. "It’s more than ever a question of discipline. We must comply with instructions for a return to near-normality as soon as possible, even if that reality won’t be the same as before." SOLIDARITY – THE KEY TO SUCCESS Clément Gignac does not adopt a bleak approach. But based on experience, he knows that even the best analyses can go off the rails. In particular, he fears the aftermath of the American election, especially Donald Trump’s protectionist tendencies that might persist under a Democratic administration. Joe Biden is less unpredictable and more pragmatic but his allies will insist on establishing barriers, especially if the U.S. economy is slow to recover. For Americans, the old reflex is back in force: When things go wrong, it’s someone else’s fault. But that is another story. "For the moment it’s important that we take care of our own business," observes Clément Gignac. "It won’t be easy for Canada as a whole, especially western Canada, but Québec is likely to do better. Our economy is more diversified, and the real estate market is less bloated." The moral? "We must stand united and work together. There is no other way to get out of this." 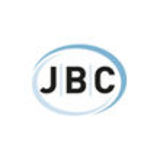