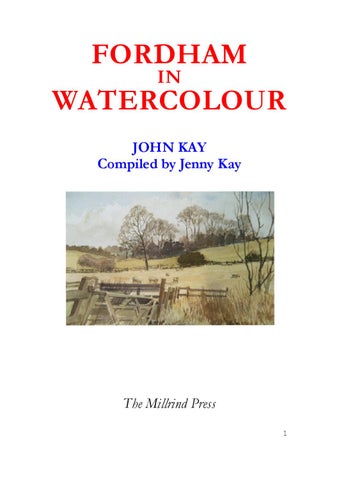 Copyright ÂŠ John Kay 2004 All rights reserved No part of this book may be reproduced or utilized in any form or by any means, electrical or mechanical, without express permission in writing from the author.

Introduction In 1975 John and I decided to move to N.E. Essex, attracted by the scenery and the open skies. Our discovery of Fordham was serendipitous. On a tour of the villages between Halstead and Colchester we found Fordham with its rolling farmland and views across the Colne Valley. We moved into a semi-detached house in Hall Road among the “acres of deplorably unrural new housing” as described by Norman Scarfe in his Shell Guide to Essex. The “unrural” bit suited the “townie” in John as he enjoys the proximity of neighbours. Over the years John has found a continuous source of subjects for paintings in and around the village. We have taken many wonderful walks around Fordham with the camera, particularly in snowy weather. Often it has taken a few years before the photograph and the sketch have been used for a painting. Many of John’s paintings are privately owned. John has kept photographs and copies have been made on cards and notelets.

Paintings Johnâ&amp;#x20AC;&amp;#x2122;s paintings are figurative, with a landscape/townscape bias. His work is traditional, he carefully composes his paintings and uses watercolour techniques with craftsman like competence, interpreting the subject in a personal way. He has been greatly influenced by Edward Seago, Rowland Hilder and Russell Flint and he much admires the abstract qualities of the modern painters, Frank Webb, Charles Sovek and Norman Battershill.

When John paints on location he often makes a preparatory tonal sketch before he starts painting and may take a photographs for later reference to detail. Sometimes he paints from photographs but these are not slavishly copied. He develops the design using sketches to ensure that compositional qualities and artistic realisation predominate. 6

Working from a photograph

Fordham Hall and All Saints Church 1998

All Saints Church and School 1991

Fordham Hall from the footpath behind Hall Road 1991

Tea at the Barn, Flower Festival 1994

The Chapel The Countess of Huntingdonâ&amp;#x20AC;&amp;#x2122;s Connexion Chapel with the Schoolroom and Manse, from photographs taken in the 1960s. (Commission 1993)

Suttons Farm painted in 2002 from an earlier photograph

Rams Farm Road , painted in 1992 from an earlier photograph

Fossetts Lane 1991 from an earlier photograph

River Colne 1980, the original is missing

Church Road 1996 from an earlier photograph

Over the years at Fordham Place (Commission)

From a painting for a Christmas Card

On the parish boundaries.

On the parish boundaries

Exhibitions John has held two exhibitions in Fordham Village Hall. These proved to be most successful. He felt particularly privileged that his 1998 exhibition was opened by David and Nancy Cannon, Mayor and Mayoress of Colchester at the time. They paid tribute to Johnâ&amp;#x20AC;&amp;#x2122;s work and his contribution to village life. John &amp; Jenny Kay, Nancy &amp; David Cannon at the opening of the exhibition in Fordham Village Hall, November 1998

My Village as shown in my own watercolour paintings 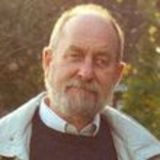