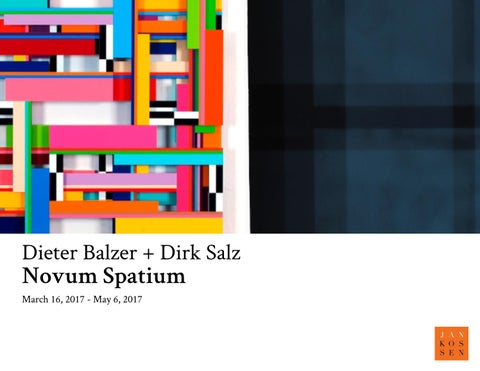 New York, NY. JanKossen Contemporary is pleased to present Novum Spatium, a two-person show featuring German based artists Dirk Salz and Dieter Balzer, on view from March 16th to May 6th, 2017. Novum Spatium, meaning New Space, explores the concept of perception in relation to our environment, physical space and one?s interaction within it. Dieter Balzer translates these ideas through pristine geometric abstraction, creating sculptural, minimalist forms that deal with depth and negative space. Bright, intricate and overlapping; the complex elements built upon each other, carry the viewer?s eyes over and through an endless, looping playground of planes. Elements of Balzer?s work run parallel to contemporary influences on graphic, industrial, and architectural design. The flatness of the vibrantly colored foils create a contemporary twist on the theories of non-representational neoplasticism, cubist sculpture, and the Japanese Superflat movement. W here Balzer uses 3-dimensional elements, the work of Dirk Salz approaches these concepts from another perspective. Instead of creating physical depth with his work, Salz toys with the impression of it. Salz uses simple, Supremacist compositions that echo with their color transparency and smooth surfaces. These highly reflective pieces confront the viewer with their own image, and present an experience of shifting planes, and varying depths. Surrounding elements found within the work?s environment emerge and are mirrored as one moves back and forth between the self and the work. Like John McLaughlin?s Light and Space movement, the works invoke a sense of temporality within one?s perception like a Robert Irwin or James Turrel installation; reinventing the world around us. Together, the two artists create a visual dialogue that is crisp, energetic and articulate. Moving between the two bodies of work invokes a sense of moving between worlds, one that brightly summons the geometric quality of architecture and the digital landscape that is so familiar to us, while the other allows us to reflect on the quality of space and our place within it. Dieter Balzer studied at the Universities of Heidelberg and Chesterfield College of Art. His work can be viewed across Germany at the Stern-W ywiol Galerie in Hamburg and the Galerie Corona Unger in Bremen, Germany; and has previously shown across the United States and Canada. He currently lives and works in Berlin, Germany. Dirk Salz studied at RW TH in Aachen, Germany and lives and works in Mulheim an der Ruhr. Exhibitions include public institutions such as the Museum Katharinenhof, Kranenburg, Kunstmuseum MĂźlheim/ Ruhr, Germany and has shown with various international galleries and art fairs.

About Us JanKossen Contemporary focuses primarily on abstract, conceptual art created by both established and mid-career international talents. Providing a platform for Pakistani, Indian and Middle Eastern-based artists who wouldn't otherwise have an opportunity to exhibit outside their home borders adds an extra dimension to the gallery program.

IMPRESSUM CONCEPT, EDITING, AND REALIZATION Jasmin Kossenjans DESIGN Kimberley Villamor PHOTOGRAPHY Provided by Artist TEXT Jasmin Kossenjans & Kimberley Villamor No part of this book may be reproduced, stored in a retrieval system or transmitted in any form, or by no means, electronic, mechanical, photo-copying, recording or otherwise, without prior permission of the publisher.