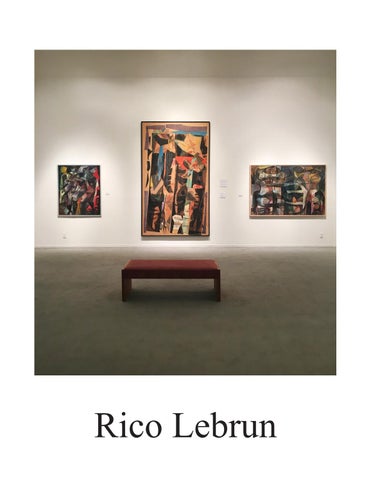 Rico Lebrun in His Studio, 1949, Photograph by Lou Jacobs, Jr.

Images © The Estate of Rico Lebrun

Rico Lebrun (b. Naples, Italy 1900 – d. Malibu, CA 1964) arrived in the U.S. in 1924. Settling in New York in his first years, Lebrun soon became a highly successful illustrator for such publications as Vanity Fair, Vogue, Harper’s Bazaar and The New Yorker. In 1934 Lebrun received his first of two successive Guggenheim Fellowships. Having already worked on several murals, he taught life drawing and fresco painting at the Art Students League in New York, before moving to Southern California in 1938. Lebrun’s impact in Los Angeles proved formidable as both an exhibiting artist and influential teacher at Chouinard Art Institute and the Jepson Art Institute, where he ultimately became its director in 1951. In the 1940s, Lebrun was among the very few artists of Los Angeles to be included in major museums in New York, including the Museum of Modern Art, Whitney Museum and the Metropolitan Museum, which purchased his painting Bull Ring in 1945. Lebrun’s first solo exhibition was presented at the legendary Julian Levy Gallery in New York in 1944. He was exhibited so widely in major museums and galleries throughout the nation that he ranked among the most widely cited artists in America. In 1967, the Los Angeles County Museum of Art organized a major retrospective exhibition, which traveled to six other institutions including the Instituto Nacional de Bellas Artes in Mexico City and the National Collection of Fine Arts in Washington, D.C. This exhibition, Rico Lebrun in Mexico, focuses attention on the period when Lebrun moved to San Miguel de Allende in 1952 to teach art at the Instituto Allende. There, a new generation of Mexican artists was introduced to and inspired by Lebrun, who distinguished himself not only as a painter and compelling draftsman, but also as a formidable muralist. His most widely known monumental scale works are the Crucifixion triptych, completed and exhibited at LACMA in 1950, now in the

permanent collection at Syracuse University, NY, and Genesis, a mural completed in 1960 at Pomona College. In Mexico, Lebrun found a landscape and a people that resonated with the color, drama and passions he had grown up with in his native Naples. Capturing everyday life and scenes in the town and marketplace,

In Mexico, in a savage and grand way, I found again things I knew from the land of my birth. The same force seemed to shape the face of the landscape and humans alike. A fractured quality reveals the outer and inner surface of the land and beings at once. A quality of sustained and continuous anatomy related the loincloth wrapped around the pelvis to the swirl of torrents around boulders; the scapular ledge of the rock continued into the heaving rib cage of the sun-bronzed human standing against it. This quality of the revealed body repelled all easy ways of delineation. To render it meant to envelop it with oneâ&amp;#x20AC;&amp;#x2122;s understanding made into a line. â&amp;#x20AC;&amp;#x201D; Rico Lebrun About Myself / Rico Lebrun: Drawing

The richest time for painting was one of disasters, of bitter nuisances and big afflictions for almost everyone I knew. But the main issue was lack of rain. The crops were burning in the drought. Bells had been clamoring for rain: then it came, violent, and with such malevolence that it changed fields into rivers and washed all the corn into the gullies.Vivid blue curtains sparked with lightning would advance across a field, carrying the terrible whispering death of crashing arrows of water to kill the credulous plants which had been shaking in anticipation and delight. Rain deluged the town too, as if someone had opened the gates for spite, some miser turned prodigal in a blind fury. Shutters, tents, market stalls and chairs, batlike skirts and flying tresses of scuttling women flapped and slid through the tall arches of solid water spouting from terraces on both sides of the streets. During pauses the walls were huge maps of mottled pomegranate, chocolate, ice blue and almond green, and the sidewalks of Queretaro stone looked like slabs of freshly cut bacon. But that spell which carried the threat of penury for all but the very rich, did something else for me. Suddenly I became outraged at planned and planted labor so easily blown to pieces in my own work, and in a galloping, infuriated mood I squeezed the season of the pictures into a vital span so short that delay could no longer twist it out of existence. From buckets of color I painted one after another... huge, yielding and resisting, scattered and united, vertical and horizontal configurations in registers of the greatest beauty and docility, without tripping once... Soon the images of true execution festooned my walls, upright, gay, sorrowing, arrogant fields of my own, plowed and harvested all at once, and I felt great. â&amp;#x20AC;&amp;#x201D; Rico Lebrun Mexican Journal

In looking over my work when I came back from Mexico, I could see that they made sense only as a dialogue carried on from day to day. This dialogue was about the remembrance of things and was not a transcription from the factual. I found that collage was of the greatest help to me. As a medium I think it is a world unto itself. It permits changes â&amp;#x20AC;&amp;#x201C; not just mendings â&amp;#x20AC;&amp;#x201C; but true changes; it allows a pace of growth so rapid that its sum total retains the live face of the unexpected which I find necessary to any image. Of one thing I was now sure: the subject is our duplicate and mirror, and I wanted to give shape to that allegiance for me and the spectator to remember. Also I wanted to remember that our image, even when disfigured by adversity, is grand in meaning; that no brutality will ever cancel that meaning; painting may increase it by changing what is disfigured into what is transfigured. â&amp;#x20AC;&amp;#x201D; Rico Lebrun About Myself / Rico Lebrun: Drawing

Tonight they will set fire to the Tirana, also called La Colonela, for the feast of Corpus Christi. She is ready, towering over the square. Jesus Piñata made her with bent canes and paper as “The Woman Who Told Lies”. He gave her an oversized head and eyes with the insipid and military stare for which she was famous in life. Her hollow interior is studded with giant firecrackers. In her adulterous loins he has placed a petard which will be the first to ignite, slowly winking garnet, then glowing to bright petunia, then exploding with insane rage. From here, with a scurrilous whistle, the fuse will light up a vine of coruscating morning-glories in the shape of her heart, which will rise through the sulphur of the wind pipe and the magenta tongue which will flare out in a comical malediction. Vesalius, working over his dissections, could not foresee that some day this new chart of symbolic anatomy would light up the sky from here to the cold hills of Atotonilco… — Rico Lebrun Mexican Journal

"Rico Lebrun in Mexico" offers a rare opportunity to view the works of one of the major American artists based in Los Angeles. Presented in conjunction with the Getty's "Pacific Standard Time: LA/LA" (Los Angeles/Latin America). The exhibition illustrates how Los Angeles’ modern art history converges with the modern art history of Mexico. That history is further underscored by the Jack Rutberg Fine Arts’ prior PST: LA/LA exhibitions, "Artists of Mexico", "Hans Burkhardt in Mexico" and "Francisco Zúñiga: Sculpture & Drawings". 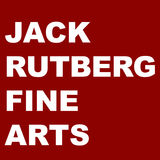