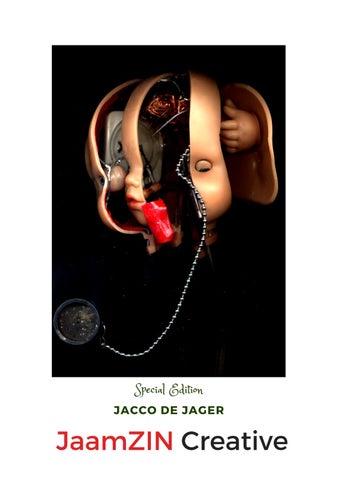 Jacco de Jager in an illustrator/artist living in Utrecht the Netherlands.To finance his passion and to pay the rent for his studio, he does paid freelance work as a (web)designer and illustrator and a part time job in the marketing branch of a telecom retailer. He also makes electronic music together under the name ‘Glitterkots en de Nasmaak’ which roughly translates to “Glitter vomit and the aftertaste”.

Where does your name 'Donorbrain' come from? As a kid I was always fascinated by anatomy. I remember these medical books my parents had full of pictures made in the seventies and occasionally would browse trough them. I’ve also always been interested in comic books and later on Manga. It was then when I discovered Battle Angel Alita. I loved the concept about human brains in a cyborg body/shell and the idea of them being interchangeable. The whole concept of an identity or ‘being’ residing in an organ, the concept of a whole world that resides in this pudding like structure in your skull fascinates me. Your entire idea of self or reality being reduced to electrons and flesh. It was around the year 2000 when I came up with the name ‘Donorbrain’. Back then I was in school studying to become a web designer. Donorbrain.com was my first domain name and it was my personal exhibition place, I would practice building websites and showing my drawings at the same time or I would use it to show off my smalltime band ‘milk’ to promote gigs and other. Back then it was way cool to have your own own website and I was never really concerned with what to put on it. So i started Donorbrain and would change the website now and then and everything on it was ‘brains’ related. Later on it also would become a platform for other artists/friends to show their work. You could even donate your brains using a webform I build. I held on to the name because I think it’s a strong name.

Please share more about you, your life and your background in art Like many I’ve been passionate about drawing since childhood because it was such an easy and intuitive way for me to express myself and work out ideas/concepts. Of course there were also periods in my life that drawing wasn’t as important but it has always been a lifeline during the years.

After high school I went to the Graphic Lyceum in Amsterdam to study multimedia design (websites, animations etc) and after that I decided I wanted even more and applied for the art school in Utrecht. I graduated in 2007 as a Bachelor of Fine Art. I wasn’t to sure if I could survive financially with my art and looked for a part time job not long after graduating. I figured if I have to have a job next to my artwork I might as well be a job which would offer me a chance to develop myself (instead of doing dishes in a restaurant which I also did for a while). I got hired as a web designer and I’ve had multiple jobs now doing similar work. After lot’s of job-hopping i think i found a nice balance now between my artwork and my part time job and like the freedom I get there and got nice colleagues btw. Who or what inspires you? I have lot’s of inspirations. I have tons of comic books and graphic novels. But also music, movies and Saturday morning cartoons have always been a huge inspiration to me. But also a lot of stuff I read online, for example, for example stories about Chernobyl or stories about Black holes or planets made entirely out of diamond. And of course what I wrote earlier about ‘donor brain’. The idea of a personality or how one would like to view itself and being subject to how others perceive your personality or how you would like for them to perceive you. Different iterations of person/identity existing layered at the same time. We would like to think we are what we think but are subject to presumptions/analysis made by others. But I can also get inspired by really small stuff like when I was in the office overthinking my life and a small dog poop suckercleaning machine would sweep the lawn I was looking at. Flashlights and all. On a quiet sunny day. I

When I work I love to play with these themes but also I can get caught in the moment and just draw whatever comes to mind. It’s important to me to add a good dose of absurd/black humour to them. Main inspirations:Musically it would be: Sonic youth, The birthday Party, Nine inch nails, Einstürzende Neubauten, DEVO, Alan Vega, David Bowie and many many more. Visually: Mark Texeira, Francis Bacon, Stanley Donwood, David Lynch, Olivier de Sagazan, David Cronenberg, Joost Swarte, Gerhard Richter, Aleksandra Waliszewska, Rebecca Horn, Katsuhiro Otomo, Robert Crumb, Evan dorkin, Jamie Hewlett, Charles Burns and many many many more.

Why are you passionate about drawing and creating? What are your hobbies? For me it’s not a conscious decision. I automatically feel an urge to alter things or the create or alter something. Even if it’s something boring like a doodle while being on the phone. When I’m creating(drawing) on a more conscious level it is very rewarding for me to have an end result I’m happy with, actually it’s as simple as that. It’s important for me to keep developing myself and my craft. To keep learning and try to never take a form or drawing style for granted. As for hobbies next to collecting vintage toys I could say my ‘musical’ activities are when we make electronic music with hard beats and sometimes vocal parts. We try to do whatever we think sounds right so for me making music is much like drawing. We do lot’s of improvisations live which I think is the best part about our act. We’re also on Spotify and Soundcloud btw (Glitterkots en de Nasmaak).

What is your motivation? For me the most important thing would be to have the freedom to keep doing this and that I would try my best to keep developing my skills/crafts in drawing/creating because deep down when it comes to that I’m never really satisfied and always see ways in which I should improve. My motivation would be to keep improving and to eventually get even more time and freedom to invest in my ambitions. The challenge would be of course to do this without neglecting the people I love and who are important to me.

What would you like to achieve in 10 years? What are your ambitions?I would like to do more (comic) books. It doesn’t necessarily have to be something big like a graphic novel it could also be something small like a zine. I’m jealous of artists who throw out one comic release after the other almost on a weekly basis sometimes. This would be a challenge for me to also be as productive when it comes to make zines/comic books. Since childhood I’ve always loved storytelling. I would incorporate entire scenarios while playing with the transformers with friends and I loved to give (even more) depth to characters. When finishing art school I first thought I would be a painter but later on decided that the world of comics is more natural to me.

WHAT HAPPENS WHEN YOUR BRAIN TELLS YOU YOU DONT EXIST

A DIET OF MASS CULTURE

WHAT HAPPENS WHEN YOUR BRAIN TELLS YOU YOU DON'T EXIST V2