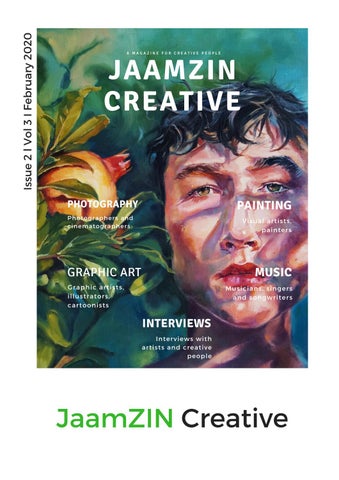 Dirk H. Wilms Dirk H. Wilms, born 1966, is a German photographer and visual artist best known for his occasionally controversial self-portraits that focuses on topics like mortality, sexuality, and identity, love, anxiety, and stigmatization. He first came to public recognition with a two-decade-long body of work, his ongoing photographic series A KIND OF ABSENCE that is concerned with his identity as a gay man living with HIV and AIDS.

Eloy My name is Eloy, I started with a camera five years ago, I'm twenty-three years old, my stage for photography is Madrid, where I currently live. It is a city with a lot of movement and many people. There are times when that can turn against you, a lot of stress, too many people, but other times it gives you a wide repertoire of situations and stories that you can capture. Being honest, many times you go out looking for the photo, but you don't always get what you want.

Owen Normand Owen Normand is a contemporary figurative painter who studied at Edinburgh College of Art. He was winner of the prestigious BP Portrait Young Artist Award in 2013 and was named as one of 15 emerging artists of great promise by Rebecca Wilson, Saatchi Art's Chief Curator in 2014. He has had solo exhibitions in Berlin and Lisbon, and has exhibited in group shows in London, New York, Berlin, Edinburgh and Glasgow.

Ronen Azulay Ronen Azulay is an Israeli born artist that lives and work in NY since 1996. Trained since a young age in fine art he followed a corporate path as an adult and designed menswear for some of the biggest brands including Ralph Lauren and Tommy Hilfiger. At the outset of 2018 he chose to bring his life and work experience together to create art full-time. In less than two years he his art was shown in multiple shows in major cities around the country.

Mike Edwards Mike Edwards is an established artist based in Brighton UK. He is well known for his portraits made of text - such as the commissioned typographic portrait of Lord Attenborough, now on permanent public display at the Attenborough Centre for Creative Arts in Brighton - or the portrait of Nadya from Pussy Riot created from the text of a William Wordsworth poem. The new Black Fireworks body of work is a break out from Edwards recognised style and signals a new direction towards a more sophisticated approach to painting.

Hyunju Kim I was born, raised, and educated in South Korea. I moved to the States in my mid 20s and there I started art study. I received both my 2nd BA and MFA in Contemporary Art Practice from Portland State University in Portland, Oregon. After graduate, I nomadically moved to do some artist residency programs and finally moved back to Korea in 2018. Now I work as a painter and a curator at Haegeumgang Theme Museum in the very southern part of Korea.

Ivan Didovodiuk Ivan Didovodiuk is a promising young artist from Ukraine. A classically trained artist, Didovodiuk holds a Master of Fine Art degree from the Lviv National Academy of Arts. Though his initial work focused on abstract expressionist painting akin in style to Pollock, his current work is predominantly focused on landscapes.

Julie Ahmad Julie attributes her life as an artist to her daughter. When she was pregnant, she often felt this strong burning desire to be creative and work with her hands. There was some kind of organic correlation between her body being in the state of creation and her heart urging her hands to do the same. She was most drawn to the looseness and forgiving qualities of abstract art.  There were no rules here - you could make them up as you went along, and she wanted more of that.  She paints in an intuitive style, not always having the final outcome in mind from the start.

Stephen Gibb Stephen Gibb lives and works in the small town of Amherstburg, in southern Ontario, Canada and maintains a second studio in Windsor. He has a B.F.A. in visual arts from the University of Windsor and is currently represented by the St. Germain gallery in Toronto. Among the cities he has exhibited in are San Diego, Sacramento, and Hollywoodâ&#x20AC;&#x201D; the hotbed of Californiaâ&#x20AC;&#x2122;s Lowbrow and Pop Surrealism community. His work is collected around the globe and has gained widening interest since working on the album art for hip hop artist Trippie Redd.

Victor Fitz My recent abstract compositions are inspired partially by my casual and pedestrian fascination with theoretical physics. Quantum Field Theory, String Theory, and the Everettian "many worlds" interpretation of quantum mechanics influence these efforts (just please do not ask me to do the math). They are also attempts to create objects that allow the viewer to explore the physiological sensation of vision.

Veronika Aron Veronika Aron, artist, painter from Vladivostok, Russia. "I work with oil paints. It’s a tool that helps me truly express myself and makes my ideas come true on a canvas. I love painting portraits, painting people because I’m attracted to their beauty and individuality. I express myself, my feelings through my paintings, and I touch on matters that are important to me."

Miq Hansen I am an illustrator and designer living in Tokyo, Japan. I immigrated to Japan in 2016, in hopes of becoming closer to the source of inspiration for both illustration and fashion that the country is for me. I am currently working together with Junya Suzuki and his clothing brand Chloma, while continuing to develop my own body of work.

Lee the Artist My name is Lee the Artist. I'm an illustrator and writer. I make comic books and fantasy art. I like to create sci-fi stories, as well as inspiring adventures with unique characters. I enjoy learning about science and physics and that has carried over into the comics I like to create, but with a touch of magic added to it.

Pau Ricart Pau Ricart is an Illustrator/Graphic Artist currently based in the creative city of Barcelona. Interestesd in illustration books and visual thinking. Pau is inspired by his ordinary life. He twists, shakes and mixes it with what he loves and hates and tries to add a little fantasy, humor or unreality. He loves to have fun and stimulate the imagination.

Vanessa Teodoro I'm a South African-Portuguese visual artist based in Lisbon. I find that my academic and professional background in graphic design and advertising have an important part in the creation of my visual identity. My style is defined by a complex battle between graphic patterns, fig urative elements and strong contrasting colours, all with a touch of chaos and humor. Having dedicated myself exclusively to illustration and fine art for the last 10 years, I have since worked with numerous renowned international brands.I take a special liking to street art projects and find the challenge of painting large public murals very rewarding.

Christian Wood My name is Christian Wood or 'Woodsy' and I live in London, UK. I grew up just outside London and spent lots of time drawing as a child. If I wanted a new toy, my Mother would instead hand me a pencil and i would draw my own adventure. From a young age, I was interested in Hip Hop, graffiti and breakdancing. I loved horror and sci-fi movies and I became interested in making things that only existed in my mind. I enjoyed escapism.

Bascofive Bascofive is an artist who is based in Copenhagen, Denmark. He at one point was very popular for his street but that’s all over now. He spends his days drawing strange images. He is poor but happy….. will he rise again.

Cindy Press The work of Cindy Press celebrates women by exploring the connection between our physical bodies and personal identity. Inspired by fashion, photography and popular culture Press references personal issues, sexuality and gender as a central theme in her work. Born and raised in Philadelphia, Press is a graduate of Moore College Of Art And Design. Being a fashion illustration major at Moore prepared her for decades of success in the fashion design world. She went onto work with artists such as Peter Max, an iconic painter of the 60”s and 70’s, interpreting his artwork into wearable art.

SKVKKA I am 20 year-old freelance digital artist from the Philippines that loves to draw portraits! I focus on creating studies of Korean idols and YouTubers but I plan to making more conceptual art soon.

Derek Friday I am an Environmental Graphic Designer, based in Boulder where my practice includes identity development, immersive branding, large format patterning, signage and way-finding systems and original art. I have worked with a number of major architectural and development firms on large retail and mixed-use projects across Europe and the U.S. for the past 15 years, ten of those as lead creative for my own small agency, Finndustry. The applications of my work can be varied depending on the specific need for creating brand continuity across an environment. I have entered at the visioning and concept phase as a consultant for bigger picture discussions, collaborated with design teams on an ongoing basis as a multidisciplinary designer throughout a project, and created comprehensive concept packages and monitored each component through fabrication. On occasion, I have jumped in towards the end of a project when the need for wayfinding and other brand integration has arisen unexpectedly. I was recently awarded the 2018 SEGD Global Design Award in the category of Identity and Placemaking for the Sagamore Pendry Hotel in Baltimore Maryland.  Other projects of note include Sagamore Spirts, Baltimore, Pearl West, Boulder, 360 Mall, Kuwait, The Boulevard at Downtown Dubai, The Roosevelt Collection, Chicago, Alexa, Berlin, Designopolis in Cairo among many others.

Mackenzie Nicole Strange Main the pop music division of Strange Music to release Mackenzie Nicole’s Mystic on February 14, accompanied by a no-holds-barred video series. While Mystic perfectly combines sultry sounds with pop sensibilities, it also opens a conversation to further break the mental health stigma. “Fun” is the third song and accompanying video that continues the journey of Mystic. Layered with effervescent sounds and brooding swirling atmosphere an ethereal melody drips off Mackenzie’s honey-coated, yet haunting vocals. The track weaves with steady tension and raw moments as she lyrically slices through the darkness.

Andrew Hetherington Andrew Hetherington is an Australian indie musician, songwriter and producer. One of life’s polymaths, Hetherington straddles these roles with confidence bringing a fierce originality yet still classic sound, forged by the music he grew up with. 80s retro-wave, laced with smooth synths, mellow guitars and achingly beautiful vocals meet the harmony and rhythms of classic pop. It’s addictive, something both new and familiar at the same time.