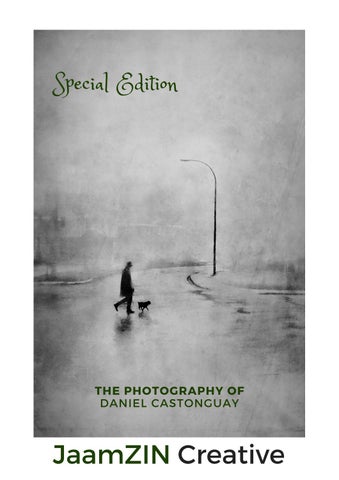 THE PHOTOGRAPHY OF DANIEL CASTONGUAY

Canadian photographer Daniel Castonguay based in Montreal is a true storyteller in capturing the life and soul of the streets. Living in a busy area, he was naturally driven to street photography, with the goal of chronicling quotidian life and human nature.

In the series "Quotidian life", he illustrates the daily life of its residents, rain or shine. He considers that through candid images, sometimes amusing or even touching, street photography is the ideal media for seizing precious slices of everyday life. Laureate of the prestigious Fine Art Photo Award of the year 2019 at the Monovisions Photography Awards in London, Daniel has been published more than 30 times in 17 countries.

His particular creative street photography style is greatly influenced by the Masters Leonard Misonne, Alfred Stieglitz and Saul Leiter who knew, each in their own way, how to depict the atmosphere of the moment in order to bring life to their imagery. As Daniel says, “Being a street photographer is above all playing a role in the urban life framework, contribute to its vivacity, its pace and almost belonging to a chaotic scenario. To me, street photography is more than a “picture making business“, it’s being part of a continuous theatrical sketch where I play the role of a silenced character.”

What do you see in the moments that had inspired you to create your series "Quotidian life"?

First and foremost, my work is one of a street photographer. From this field work, in a post production stage, Iâ&#x20AC;&#x2122;m emphasizing the mood I was in and add atmosphere, dramatizing my imagery, thus challenging the strict rules of street photography which may displease some purists. As some people just can't believe it's possible to take photography in new directions and to avoid any ambiguity as to the photographic style, let's then call it 'Creative Street Photography'. For me, street photography is neither more nor less than a matter of relationships with people and our environment and these ties will induce different behaviours which we can relate to. These reciprocities can be with others, elements or things. For example, our relationship with bad weather such as rain, will induce a state of resilience that will render mood to imagery. The quotidian life is more or less the same for all with a few variations. I consider that a part of my work as a photographer is to bring this daily life into a world of fantasy, something related to reverie. This will create a duality, a paradox. The paradox of the ordinary life in a universe that exists only in one's own imagination that can literally be anything but still being able to relate to.

What are your composition techniques to your photography?

In my opinion, photography is first an artistic discipline of course, but also one of geometry. In the photographic style I’m exploiting, which happens mainly outdoors, a little visual cue allows to have a sketch of the geometry of the whole. An aspect not to be neglected is optimizing where the pictures are taken in order not to run out of steam looking for photo spots. As you may have noticed, the majority of my photos are taken at intersections. The North American cities, built on a quadrilateral model, offer an “unparalleled” point of view, not to mention the pavement and bicycle paths that give a dimension of depth to imaging. It is also quite impressive depending on the time of day, to see the attitude of passersby. The gesture varies a lot for example at rush hour where people are in a hurry, giving a particular mood to the imagery, while lunch time is still pretty easy and scenes offer a different dynamic in the sense that people take their time in their travels and it shows in their attitude. All this combined allows me to roam peacefully in the city without much effort ending up with a “full roll” at the end of the day.

Is it intentional or a coincidence in your photography to capture shots of people walking and holding an umbrella in the distance?

Bad weather and dark mood are omnipresent. I like to shoot on dark days and days of rain or snow. One of the reasons is that the subjects are in a state of resilience and it shows in their attitude and gesture and that brings mood to the image. Another reason is rather one that adds to the compositional geometry and it is the reflection on the wet surfaces that will lengthen the verticals, these reflections are very subtle and without disturbing the eye they add to the general aesthetics of the image. Obviously, photographing in such circumstances involves umbrellas that add this little something to my work. I like the fact that the characters have accessories, embellishing and harmonizing the scenery. Also, I avoid to photograph in sunny weather as the shadows parasitize the scene in some ways. In the style that I exploit, I capitalize enormously on aesthetics and geometry and the presence of shadows is superfluous and unbalance the imagery.

Are you able to share with us your thoughts (as a photographer) of such moments?

The beauty of the thing when I'm in the field is that I do not think about anything, everything goes too fast and I have no choice but to live the moment. During a photo shoot, it's fascinating to watch the scenarios of images building up by themselves. My street work is also a bit of predicting what can happen and anticipate the sketch that will result in the following seconds, but sometimes the scenario takes a different turn and ends up in surprising results. The advantage of all this is that the street photographer does not work on a set up as the show builds by itself. The only qualities required are, presence, attention and anticipation. In fact, my job as a street photographer is one of witnessing the life that goes on.

Climate change is one of the greatest ecological, economic, and social challenges facing us today. Do you consider your photography style being a great reminder for on viewers about climate change?

In photography and especially when working on a series that stretches over several years, everything depends on the intention and the direction one wants to give to it. The intention, when I started the series "Quotidian life" was rather depicting the small slices of life that we all live on a daily basis always keeping poetry as a tangent. Even though, often my images are taken in bad weather, the fact remains that the direction of my series will not go towards climate change although very much concerned by what happens. However, some of my colleagues have given themselves the mission of illustrating in a "Fine Art" way or as photojournalists the state of the world in which we live and that includes climate change. The power of imagery in my opinion, tenfold the power of words and this has no other effect than to influence the thoughts of the mass in a positive way. Thank you to my colleagues for working on this worthy cause.

MY WAY AND RUSH

THE CHALLENGE AND THE WHITE CAP

The photography of Daniel Castonguay

Canadian photographer Daniel Castonguay based in Montreal is a true storyteller in capturing the life and soul of the streets. Living in a b...

The photography of Daniel Castonguay

Canadian photographer Daniel Castonguay based in Montreal is a true storyteller in capturing the life and soul of the streets. Living in a b...