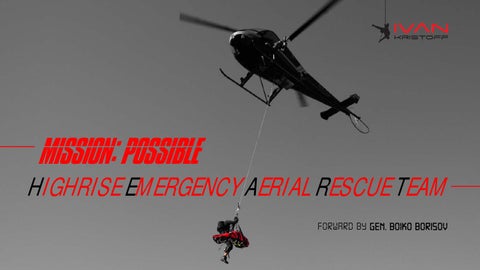 Imagine if lives can be saved in high altitude mid air emergency situations. It sounds like science fiction, but it is not!

WITH THE THREE PHASES OF PROJECT M.A.R.S., WE WILL WRITE A NEW CHAPTER IN THE HISTORY OF RESCUE

The unique project for Mid Air Rope Rescue This article is translated from its original "Spider Man has a unique project "MARS" Mid Air Rope Rescue" from the Trud Newspaper. Ivan Kristoff, who is popular as Spider Man developed the project "MARS" for Mid Air Rope Rescue on super highrise buildings over 400-600 meters. He is actively preparing to showcase his study during the prestigious Dubai Helishow exhibition in 2016 and present a unique concept, which he thinks can open a new chapter in aviation history and air rescue. Our country man has found that builders of megacities are becoming bolder and therefore his decision for creating a High Emergency Aerial Response team to deal with crisis on the vertical walls of skyscrapers is to implement advanced rescue techniques. "I already have a wealth of experience in this business. It turned out that I'm the only one in the world volunteer aerial rope rescuer who has initiated such series of training with private and government helicopters and self-invested in these expensive hobbies. The first flight cost me over $ 6,000 in less than an hour hanging below the helicopter. At this time it was extremely difficult to get permits for experimental flights over the city and especially with the private aviation. I had no car and for a long time I saved money to buy one, but my savings melted in the air for minutes. My love for the aviation, however, was so strong that even interrupted his studies at Ryerson University in Toronto to pay for my flight hours,â&#x20AC;? recalls his first experience in the high air Ivan Kristoff.

The Bulgarian adventurer shared that the international news agency were impressed by his project "MARS"/Mid Air Rope Access /, a very small part of which was who presented to a special audience and the Prince of Dubai, Sheikh Mansour bin Al Maktoum, during Dubai Helishow 2014. "He specifically came to my exhibition with his suite and sew my photos, which showcased our joint flight training with Air Wings Gendarmerie Commander of flight Cornell Panaiot Kondev, the Airbase Krumovo Commander and General Zlatko Zlatev. There were some photos of our experimental flights with pilots from the Civil Aviation with whom we used the simplified double-style bond of air operations from a helicopter with a single engine, â&#x20AC;&#x153;explains Ivan Kristoff. Our native Spiderman invented and imposed the term T.E.A.M. /Two Emergency Airmen / or lightweight system from the only two people - a pilot and lifeguard. "We did the first operation with central rope hanging attachment from a helicopter ENSTROM 480B. With another pilot he conducted the first ever such specialized cascade by jumping over the water from the air without a parachute from a helicopter Robinson 22. From the manufacturer company of the first helicopter, as well as the Specialized Unit for Combating Terrorism from the Ministry of the Interior, requested the video immediately. This type of operation has triggered a debate in Bulgaria and abroad, â&#x20AC;&#x153;says laughing Ivan Kristoff. His projects impressed several film teams with extensive experience in capturing innovative projects and displaying them on the world stage. At first they were intrigued by the fact how a volunteer self-finances and makes air operations that even "The Power That Be" and powerful organizations with budgets over a billion dollars a year could not afford. "Such is the case with the tripartite Rescue System 911 Police, Fire and Ambulance in Toronto, Canada, which despite their huge budget and more than 15,000 high-rise buildings, they have no own resources for emergency rescue by air. Even

ten years ago the budget of the Toronto Metropolitan Police was over 610 million dollars a year. And the budget of the Toronto Fire Department is much greater. An example is that for each received signal from the fire alarm that detects even a smoke from high rise apartment, by law, three fire trucks must arrive within 3 minutes form each point in the city. Besides training, I participated several times by helicopter and demonstrations for charity. Thanks to them, with the mayor of Toronto, Mel Lastman, we collected nearly $500,000 for several hospitals and initiatives, "says the daredevil. Ivan Kristoff revealed that intrigued by his adrenaline developments one of the leading insurance companies in Bulgaria is interested to pay for the filming and publicizing his feats.. â&#x20AC;&#x153;For this project, they would expect me to have a contract and offer rescue services. But I'm a volunteer and strictly observe the rule not receive money for rescue operations. With me things in this respect always been clean - I never take and would not allowed to take money for life-saving missions. My business is in a completely different direction, volunteering is non-commercial, "said Spider Man. Because of this, in order to capture these images Ivan Kristoff negotiate with foreign companies that have an interest in not only promoting this endeavor, the promotion of their destinations, but are interested to develop innovative and more effective methods of emergency responsive performance and Rescue lives in air. "Unfortunately, in Bulgaria there is no private powerful helicopters or crews a sufficiently long flight duration and confidence to accomplish risk my projects. Although we have held multiple conversations, meetings and communications, our private aircraft is unable to perform daring flights and Rope helicopter operations in extreme situations. Otherwise it would be a great investment for Bulgaria, to be financed by foreign companies who would pay not only for the filming of his team, but our airlines. Furthermore, Bulgaria would benefit from the advertising world TVs that have an audience of millions of viewers, "said Ivan Kristoff.

This presentation addresses, what is extreme rope access on super high-rise buildings, above 200 meters, what is the difference of working conventional and industrial rope access, how the technician must be prepared for extreme and harsh working conditions at elevations above 500 meters, learns his skill from unrelated sports and how training is conducted. This presentation will cover the experience of the very first suspended access at heights above 500 meters and possible worst case scenarios, their prevention and the fundamentals of specialized and essential equipment.

The largest helicopter show in the Middle East will bring innovative concept for the high altitude rope and air rescue, helicopter operations and aviation safety During Dubai Helishow 2012 a new concept that can open a new chapter in the aviation, helicopter safety and aerial rescue history was announced. Mid Air Rope access responSe – M.A.R.S. – (conducting high altitude aerial rescue). At this event, for the very first time in the world, was presented the concept of the Ultimate Aerial Rescue. One of its segments, Mid Air Rope access, can be applied in the super high-rise industry and prepare emergency services for creating High-rise Emergency Aerial Response Teams (H.E.A.R.T.) The Dubai Helishow 2014 will once again attract many of the world’s top experts who have the same goal – to share their experience and vision on what will make helicopter operations safer and more efficient. “Dubai Helishow has the tradition to present innovative ideas to the constantly increasing high rise building development in the Middle East and the world’s helicopter industry. In its history the will to make helicopter aviation safer is embedded. Now it will write a new page in the development of air rescue operations on super high-rise buildings, such as the Burj Khalifa...”, says Kristoff, known as the Canadian Spiderman. The project has been initiated by Ivan after the completion of the very first rope access work on the Antenna Mast of CN Tower (553m.), the world’s tallest structure in 2003 and Canadian Wonder of the Modern World. For this job he had to create an innovative super high rise Emergency Rescue Plan and rewrite the rules for conventional aerial rescue from super high rise buildings. The plan includes aerial extraction of the rope access team from the top of the Skypod Observation deck and the exterior top of the CN Tower.

At that height, extreme weather conditions, frozen ropes and strong winds, present too many challenges and unprecedented scenarios to deal with. And where there are strong winds, there are too many “unknowns”, especially for vertical and aerial operations. For helicopter pilots hovering at the height of above a few hundred meters off the ground is a challenge. At the Dubai Helishow 2014, Ivan Kristoff will present how to train aerial emergency rope access personnel for such operations and how to use the most modern GPS and mobile communication technology to monitor them in real time. The M.A.R.S. concept has been presented to several air rescue and military organizations, including NASA. Further, the concept was shaped in the term M.A.R.S., which focuses on three separate, but related topics of: M.A.R.S. – Mid Air Recovery System – A.I.R. M.A.R.S. – Maritime Air ResponSe – Sea-Air-Land rescue M.A.R.S. – Mid Air Rope accesS – Mid Air Rope Access – M.A.R.S. For the presentation “Vertical Reference Long-Line External Cargo Ground Training course”, Ivan Kristoff will provide a course segment on Class D Human External Cargo Vertical rescue. He will bring us current with the Human External Cargo rules and regulations as well as equipment and mission. For the presentation “M.A.R.S. Presentation”, Ivan Kristoff explained what is extreme rope access on super high-rise buildings, above 200 meters, what is the difference between conventional and industrial rope access, how the technicians must be prepared for extreme and harsh working conditions. It will cover the experience of the very first suspended access at heights above 500 meters and possible worst case scenarios, their prevention and the fundamentals of specialized equipment.

Ivan Kristoff participated in Sea-Air-Land rope rescue demonstration. Considered as one of the most experienced and talented experts in vertical/aerial rope access operations, and a man willing to share his knowledge with others, Ivan Kristoff continues to exert a strong influence on the direction in which the volunteer organizations can participate in Air Rescue.

M.A.R.S. is a pioneering project for the aerospace safety and high-rise industry. The project is initiated by Ivan Kristoff after the completion of the very first rope access work on the Antenna Mast of CN Tower (553m.), the world’s tallest structure in 2003. For this job Ivan had to create innovative high rise Emergency Rescue Plan and rewrite the rules for conventional air rescue from super high rise buildings.

During Dubai Helishow 2012 a new concept that can open a new chapter in the aviation, helicopter safety and aerial rescue history was announced. Mid Air Recovery System– M.A.R.S. – (conducting high altitude aerial rescue). At this event, for the very first time in the world, was presented the concept of the Ultimate Aerial Rescue. One of its segments, Mid Air Rope access, can be applied in ... Ivankristoff.com/mars 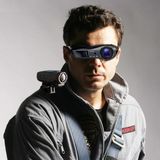 This is a private link, accessible only for selected readers. When the Book is ready to be published, it will be available on line for the p...

This is a private link, accessible only for selected readers. When the Book is ready to be published, it will be available on line for the p...