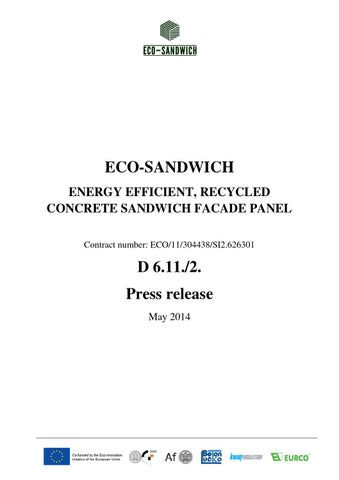 On 14th of May 2014 at the University of Zagreb, Faculty of Civil Engineering workshop ECOSANDWICH® day was held on themes Energy Efficiency, Sustainable construction and Use of recycling resources in the Croatia. During the workshop European project was introduced together with its product „ECOSANDWICH®, Energy efficient, recycled concrete sandwich facade panel“. ECOSANDWICH® wall panel system was developed by Croatian consortium and funded by the European Commission under Cip Eco-Innovation. ECO-SANDWICH® day was organazied within 5th Energy Week Zagreb with moto „Development we don&#39;t want to stop, but pollution we can!“. During the presentation, which were held by prof. Ljubomir Miščević (Faculty of Architecture, University of Zagreb), Bojan Milovanović from University of Zagreb Faculty of Civil Engineering, Juro Božić from EURCO Inc. and Jasna Golubić (presenter of the City of Koprivnica), problems with energy efficiency, construction and demolition waste and ECOSANDWICH® system as a potential solution were discussed.

Today, construction and demolition waste (CDW) as a by-product of human daily and economic activities has become an unavoidable problem. This is caused by the environmental pollution process which is going faster than the natural recovery process as the consequence of industrialization, economic development, but also the disregard of the fact that the eco-system is nearing to its breaking point. Because of the high potential for re-use and recycling embodied in these materials CDW has been identified by the European Commision as a priority stream. Indeed, a proper management would lead to an effective and efficient use of natural resources and the mitigation of the environmental impacts to the planet. The Waste Framework Directive (WFD) requires Member States (MS) to take any necessary measures to achieve a minimum target of 70% (by weight) of CDW by 2020 for preparation for re-use, recycling and other material recovery, including backfilling operations using non-hazardous CDW to substitute other materials. Statistic data shows that Croatia reuses and recycles only 7% of CDW. On the other hand, existing buildings are one of the biggest energy consumers and have great impacts on the environment. The energy efficiency in building is defined by using less energy for space heating and cooling, ventilation, lighting and hot water, without degradation of comfort. Therefore, implement plans for improving energy efficiency is imported in the Croatian legislation through laws and by-laws where most important is Law for energy efficiency use of energy in the final consumption (Official Gazette 152/2008, 55/2012) and the Construction Law (Official Gazette 153/13). The ECO-SANDWICH wall system is an innovative prefabricated ventilated wall panel with integrated core insulation allowing very low energy design and retrofit of buildings. Around 50% of the total aggregate quantity needed for production of concrete layers has been replaced with recycled aggregate obtained from construction and demolition waste. A newly developed mineral wool manufactured using Ecose速 Technology, which uses biobased minerals free from formaldehyde, phenol and petrochemicals, is used as a thermal insulation material. The performed life cycle analysis was made and indicates the potential of the ECOSANDWICH速 wall system in terms of reducing embodied energy and embodied carbon. By comparing the ECO-SANDWICH with a generic EPS-core concrete wall panel, it can be seen that the use of ECO-SANDWICH allows for significant saves - around 46% of embodied energy and around 39% of embodied carbon per panel for a life span of 50 years. Results of thermal properties, concrete containing recycled concrete and recycled brick aggregates have 36 % and 45 % lower thermal conductivity than the reported literature values for the dry concrete with approximately the same density. Concrete sandwich panel has higher thermal mass, 458 kg/m2 that results with very good dynamic thermal properties. There is 25% less energy needed for heating in buildings comparted to lighted buildings and 50 % less energy needed for cooling comparing massive with lighted buildings. The fire resistance testing of ECO-SANDWICH速 panels recommended classification in class EI90 according to norm HRN EN 13501-2: Fire classification of construction products and

building elements – Part 2: Classification using data from fire resistance tests, excluding ventilation services. The aim of the panel discussion was to focus on the public and professional perception of the concrete as sustainable material, barriers and challenges of using sustainable construction material and products in the everyday time, its use during public procurement and legislative barriers. The cooperation of Croatian scientific institutions and industry for developing a new competitive product and there barriers and advantages trough representative example of the consortium ECO-SANDWICH® was discussed. It was concluded that designers and builders are aware of advantages of building with precast panel systems, its better quality and 70% faster construction. Also it was concluded that investors are skeptic over this kind of construction without any rational argument. In the panel discussion there were 50 participants with panelists: project coordinator, prof. Ivan Banjad Pečur PhD., Milan Jokića (Secretory of the Coordination of association of occupant for the Croatia – KUSRH); Danica Jelenić (Director of the Beton Lučko), Jasna Golubić (presenter of the City of Koprivnica) and prof. Ljubomir Miščević (Faculty of Architecture, University of Zagreb). City of Koprivnica presented their activities carried out within project Bold new face of Koprivnica, and its orientation towards building of passive and very low-energy buildings in the form of public procurement. Also there is the strongest incentive of the City of Koprivnica stems from the Decision on the Municipal Contribution to the City of Koprivnica for investors who build passive houses -energy class A+ residential buildings. They receive subsidies of 100% of utility contributions. Also, it was discussed the issue of the co-owners of building apartment in the implementation of energy efficiency projects. Cost comparison was made for construction of building envelope (masonry and ETICS –EPS, masonry and ETICS – mineral wool, reinforces concrete and ETICS – EPS and reinforces concrete and ETICS – mineral wool) for a family house using different construction systems and compared with the ECO-SANDWICH® wall panel. Cost comparison showed that buildings with ECO-SANDWICH® systems is only 9% expensive than buildings made from masonry and ETICS with EPS while it’s cheaper than reinforced concrete with ETISC (mineral wool). Cost comparison was made for passive house with three flats and all cost for envelope construction were included. Throughout cost analyses, it is important to point out the necessary of observation the time as a parameter in order to assess the cost of construction of precast elements, as the ECO-SADNWICH® façade panels, which further lowers the total cost of construction because of 70% faster construction than classical systems construction. Being harmonized with both Energy Performance of Building Directive - EPBD (2002-91-EC), its Recast EPBD II (2010-31-EU) and EU Waste Framework Directive (2008/98/EC), the presented wall system is expected to facilitate the implementation of both legislations by providing a market for recycled CDW and by substantially improving the energy balance of the existing as well as planned building stock.

ECO-SANDWICH® prefabricated concrete wall system achieves sustainable, healthier environment and living ambient for occupants. The wall system helps to follow waste hierarchy by using recycled CDW and recycled materials used in the production of Ecose® based mineral wool, incorporating them into a new, eco innovative and sustainable product with a closed loop. More information about ECO – SANDWICH® can be found in direct contact with the coordinator professor Ivanom Banjad Pečur (banjadi@grad.hr).