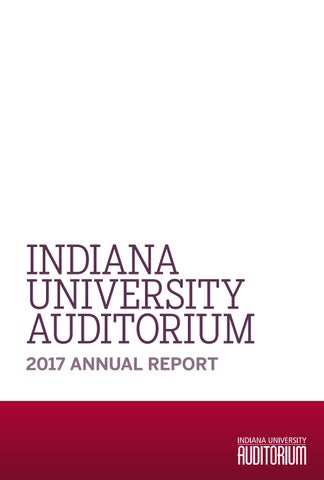 LETTER FROM THE DIRECTOR

DIRECTOR Dear Friend, In many respects, last season marked the turning of a corner. Buoyed by the previous year’s celebration of IU Auditorium’s 75th anniversary, in 2016–2017 we put our best foot forward and took steps to position ourselves for the coming years. We offered selections from a wide range of performance genres, including touring Broadway shows, concerts, dance, and, of course, seasonal traditions and fan favorites. An early highlight was our season opener, RENT. Not only did this Pulitzer Prize-winning musical return for its 20th-anniversary tour, it launched this national tour right here in Bloomington and provided a number of education and outreach activities while they were in town rehearsing. 2017 kicked off with two large-scale residencies back-to-back: The Cleveland Orchestra and Dance Theatre of Harlem. This set the stage for what was a busy semester of exciting and well-attended, world-class performances. Over the entire season, we served over 120,000 event guests. In 2016–2017, we continued to experience growth and development in key areas: • Academic collaboration • Community education • Business partnerships • Event variety, scope, and impact • Technological development As good stewards of the generous support we receive from patrons, sponsors, donors, and the university, in the 2017–2018 season IU Auditorium will continue to: • Ensure that Indiana University students, faculty, staff, alumni, as well as the local community, have the opportunity to experience a diverse selection of programming across the spectrum of arts and entertainment • Evolve in the areas of event presentation and management • Serve the university community through initiatives aligned with strategic goals Thank you for another fantastic year and we look forward to seeing you this season!

ll of us at IU Auditorium share the goal of, and play a role in, ensuring that students have a quality experience at Indiana University. One of the ways we do this is by making it easy for IU students to afford admission by offering up to 50 percent off the price of season events. We also offer educational programming and mentoring.

Educational Programming Our educational programming connects students with visiting artists, giving them opportunities to interact with professionals, and in some cases, celebrities. These engagements range from masterclasses, workshops, and panel discussions to open rehearsals and pre-show talks. Students not only find these interactions informative and inspiring but also practical in terms of their own career goals and activities.

Learning Laboratory Learning for the sake of learning has its own intrinsic rewards. However, participation in realworld situations deepens studentsâ&#x20AC;&#x2122; understanding and experience. IU Auditorium creates opportunities for students to experience the live event industry by training them in roles such as volunteer ushers, box office clerks, and guest services personnel. Also, we employ student

interns so they can obtain knowledge and real-world skills in marketing, development, event management, and educational outreach. These opportunities allow students to explore career paths and help them catch the eye of potential employers.

Artist Engagement Events When booking acts for IU Auditorium we work hard to ensure Indiana University student patrons can have meaningful interactions with visiting artists. Events such as masterclasses, mock auditions, and rehearsals offer the chance of a lifetime for students to learn from masters in their field. Quite often, thanks to the generosity of the group or artist, we also can offer schoolchildren and community members the opportunity to meet and talk with cast members of orchestras, theatre groups, and dance companies. Last season, we exceeded engagement expectations with the help of two highly esteemed groups in back-to-back, intensive residencies. The Cleveland Orchestra carried out an ambitious itinerary of educational activities over the course of four days. The following week, Dance Theatre of Harlem extended our reach out of Bloomington and took their historic focus on education to points north starting in IU South Bend then continuing to IUPUI and ending in Bloomington. In total, over 3,000 participants attended!

These events consisted of panel discussions, workshops, school visits, lecture demonstrations, and seminars. Last season’s highlights were the “Sexploration” panel in conjunction with RENT, a lecture-demonstration by Dance Theatre Harlem for schoolchildren and community members, and Vocalosity’s visits to two Bloomington schools.

Cast and crew interaction are events like meet and greets, pre- and post-show Q & A talks, mock musical auditions, and book signings. Nearly every performance group or guest interacted with us this year!

Auditorium provides a direct connection between the residents of South Central Indiana and Indiana University. We are proud to be the face of IU to the thousands of community members who enter our doors each season. But we don’t do it alone. Through cooperative relationships with touring artists and by joining forces with local non-profit organizations, we enhance individuals’ lives and learning at no cost to them.

For nearly every season performance, we provide supplemental programming such as school visits, lecture demonstrations, and pre- and post-show talks. These popular events deepen the audience’s understanding and appreciation of the art form. This translates into a positive connection with IU Auditorium as well as the university.

A program which began in 2013, Give the Magic continued to provide underserved members of our community access to the Auditorium and its programming. This season, we shared 100 tickets with children and their caregivers from eight local social service agencies to enjoy Chimes of Christmas.

In 2016–2017, IU Auditorium was again a presenting partner with Lotus Festival to help bring global music artists to Bloomington. We also partnered with community organizations to collect donations for the needy, including a toy collection in partnership with Toys for Tots in conjunction with our holiday season events Chimes of Christmas and Straight No Chaser.

IU students were thrilled to have a backstage tour while RENT was on campus rehearsing its 20th anniversary tour. 8

For the Love and Fun of It

Vocalosity held an online singing contest for a cappella groups and the winner was Hooshir, Indiana Universityâ&#x20AC;&#x2122;s 20-member group.

Santa listens to Christmas wishes during Give the Magic.

The cast of RENT answers questions during a post-show talk. 9

hile our beautiful historic facility on the Fine Arts Plaza and our welcoming staff are the face of IU to thousands of patrons, IU Auditorium is also highly respected and regarded for how it supports many other IU entities. We have a proud history of being of service to student organizations. We also serve as a platform to help promote distinguished faculty and their contributions to society. Our staff members possess specialized skills in event presentation and we regularly extend this expertise beyond our four walls. The flawless execution of large-scale ceremonies, athletic events, and musical concerts—and your enjoyment of these—is our reward!

IU Auditorium and Union Board collaborated to bring actress Octavia Spencer to IU.

Scholarship Program Throughout the 2016–2017 season, IU Auditorium continued its tradition of serving as an educational resource for students. In addition to offering season-long opportunities for hands-on venue management, we provided academic scholarships to five qualified students. These scholarships are the legacy of Winston Shindell, the retired executive director of Indiana Memorial Union and IU Auditorium who helped formalize the experience for students to gain practical knowledge by working with staff. Congratulations to these 2016–2017 recipients: Sierra Collins, Sophia Lahey, Rebekah Gabbard, Kayla Curry, and Stephanie Wolfe.

INTERDEPARTMENTAL SUPPORT AND COLLABORATION Did you know that IU Auditorium provides support services for and works alongside many other IU entities? For example, box office services are used to support ticketing needs for the IU Cinema and Department of Theatre, Drama, and Contemporary Dance, as well as regional IU campuses; our department of IU Event Services provides guest service and staffing for all IU Athletics and other University events; staff in marketing and event management work alongside Union Board to present events; and we collaborate with departments like the IU Jacobs School of Music to design residencies that connect artists with IU students.

REVIEW The 2016–2017 season was an ongoing celebration of our rich history of Broadway classics, contemporary dance, local favorites, classical artists, and never-before-seen productions. Once again our year was filled to the brim with world-class arts and events!

Total Tickets to Season Events Into the Woods

n addition to scheduled season events, we were pleased to host a number of significant events produced by students and community members. These events bring new and important perspectives to the table and add to the public conversation, making the IU Auditorium a true community gathering place.

Potpourri of the Arts

IU African American Arts Institute returns to IU Auditorium for their Potpourri of the Arts.

The support we receive from the university partially funds discounted use of the Auditorium by university departments and student organizations.

Did you know that IU Auditorium hosts one of the largest student volunteer groups on campus?

Auditorium owes a debt of gratitude to all the team members who worked tirelessly to execute our 2016â&#x20AC;&#x201C;2017 season.

“IU’s reputation for excellence in the arts and humanities is also based, in part, on its superb facilities—iconic buildings like the IU Auditorium where members of the IU community and the general public have unparalleled opportunities to engage with the arts. [IU Auditorium is] a hub of cultural vibrancy and a major part of Indiana University’s glorious tradition in the arts.” Michael A. McRobbie President Indiana University