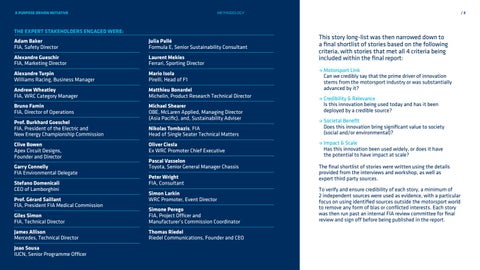 This story long-list was then narrowed down to a final shortlist of stories based on the following criteria, with stories that met all 4 criteria being included within the final report: → Motorsport Link Can we credibly say that the prime driver of innovation stems from the motorsport industry or was substantially advanced by it? → Credibility & Relevance Is this innovation being used today and has it been deployed by a credible source? → Societal Benefit Does this innovation bring significant value to society (social and/or environmental)? → Impact & Scale Has this innovation been used widely, or does it have the potential to have impact at scale? The final shortlist of stories were written using the details provided from the interviews and workshop, as well as expert third party sources. To verify and ensure credibility of each story, a minimum of 2 independent sources were used as evidence, with a particular focus on using identified sources outside the motorsport world to remove any form of bias or conflicted interests. Each story was then run past an internal FIA review committee for final review and sign off before being published in the report.