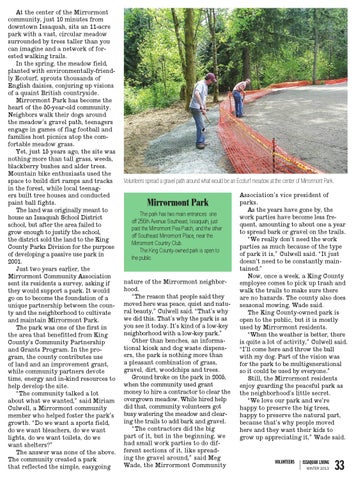 At the center of the Mirrormont community, just 10 minutes from downtown Issaquah, sits an 11-acre park with a vast, circular meadow surrounded by trees taller than you can imagine and a network of forested walking trails. In the spring, the meadow field, planted with environmentally-friendly Ecoturf, sprouts thousands of English daisies, conjuring up visions of a quaint British countryside. Mirrormont Park has become the heart of the 50-year-old community. Neighbors walk their dogs around the meadow’s gravel path, teenagers engage in games of flag football and families host picnics atop the comfortable meadow grass. Yet, just 15 years ago, the site was nothing more than tall grass, weeds, blackberry bushes and alder trees. Mountain bike enthusiasts used the space to build dirt ramps and tracks in the forest, while local teenagers built tree houses and conducted paint ball fights. The land was originally meant to house an Issaquah School District school, but after the area failed to grow enough to justify the school, the district sold the land to the King County Parks Division for the purpose of developing a passive use park in 2001. Just two years earlier, the Mirrormont Community Association sent its residents a survey, asking if they would support a park. It would go on to become the foundation of a unique partnership between the county and the neighborhood to cultivate and maintain Mirrormont Park. The park was one of the first in the area that benefitted from King County’s Community Partnership and Grants Program. In the program, the county contributes use of land and an improvement grant, while community partners devote time, energy and in-kind resources to help develop the site. “The community talked a lot about what we wanted,” said Miriam Culwell, a Mirrormont community member who helped foster the park’s growth. “Do we want a sports field, do we want bleachers, do we want lights, do we want toilets, do we want shelters?” The answer was none of the above. The community created a park that reflected the simple, easygoing

Volunteers spread a gravel path around what would be an Ecoturf meadow at the center of Mirrormont Park.

Mirrormont Park The park has two main entrances: one off 256th Avenue Southeast, Issaquah, just past the Mirrormont Pea Patch, and the other off Southeast Mirrormont Place, near the Mirrormont Country Club. The King County-owned park is open to the public.

nature of the Mirrormont neighborhood. “The reason that people said they moved here was peace, quiet and natural beauty,” Culwell said. “That’s why we did this. That’s why the park is as you see it today. It’s kind of a low-key neighborhood with a low-key park.” Other than benches, an informational kiosk and dog waste dispensers, the park is nothing more than a pleasant combination of grass, gravel, dirt, woodchips and trees. Ground broke on the park in 2005, when the community used grant money to hire a contractor to clear the overgrown meadow. While hired help did that, community volunteers got busy watering the meadow and clearing the trails to add bark and gravel. “The contractors did the big part of it, but in the beginning, we had small work parties to do different sections of it, like spreading the gravel around,” said Meg Wade, the Mirrormont Community

Association’s vice president of parks. As the years have gone by, the work parties have become less frequent, amounting to about one a year to spread bark or gravel on the trails. “We really don’t need the work parties as much because of the type of park it is,” Culwell said. “It just doesn’t need to be constantly maintained.” Now, once a week, a King County employee comes to pick up trash and walk the trails to make sure there are no hazards. The county also does seasonal mowing, Wade said. The King County-owned park is open to the public, but it is mostly used by Mirrormont residents. “When the weather is better, there is quite a lot of activity,” Culwell said. “I’ll come here and throw the ball with my dog. Part of the vision was for the park to be multigenerational so it could be used by everyone.” Still, the Mirrormont residents enjoy guarding the peaceful park as the neighborhood’s little secret. “We love our park and we’re happy to preserve the big trees, happy to preserve the natural part, because that’s why people moved here and they want their kids to grow up appreciating it,” Wade said.