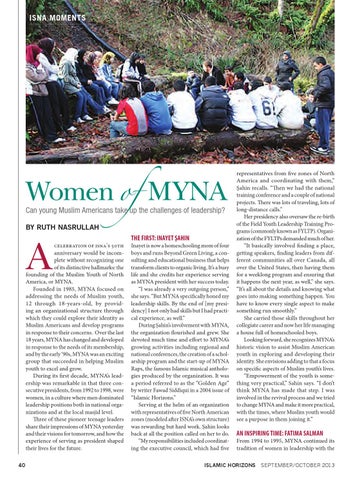 Women of MYNA Can young Muslim Americans take up the challenges of leadership? By Ruth Nasrullah

celebration of ISNA’s 50th anniversary would be incomplete without recognizing one of its distinctive hallmarks: the founding of the Muslim Youth of North America, or MYNA. Founded in 1985, MYNA focused on addressing the needs of Muslim youth, 12 through 18-years-old, by providing an organizational structure through which they could explore their identity as Muslim Americans and develop programs in response to their concerns. Over the last 18 years, MYNA has changed and developed in response to the needs of its membership, and by the early ‘90s, MYNA was an exciting group that succeeded in helping Muslim youth to excel and grow. During its first decade, MYNA’s leadership was remarkable in that three consecutive presidents, from 1992 to 1998, were women, in a culture where men dominated leadership positions both in national organizations and at the local masjid level. Three of these pioneer teenage leaders share their impressions of MYNA yesterday and their visions for tomorrow, and how the experience of serving as president shaped their lives for the future. 40

Inayet is now a homeschooling mom of four boys and runs Beyond Green Living, a consulting and educational business that helps transform clients to organic living. It’s a busy life and she credits her experience serving as MYNA president with her success today. “I was already a very outgoing person,” she says. “But MYNA specifically honed my leadership skills. By the end of [my presidency] I not only had skills but I had practical experience, as well.” During Şahin’s involvement with MYNA, the organization flourished and grew. She devoted much time and effort to MYNA’s growing activities including regional and national conferences, the creation of a scholarship program and the start-up of MYNA Raps, the famous Islamic musical anthologies produced by the organization. It was a period referred to as the “Golden Age” by writer Fawad Siddiqui in a 2004 issue of “Islamic Horizons.” Serving at the helm of an organization with representatives of five North American zones (modeled after ISNA’s own structure) was rewarding but hard work. Şahin looks back at all the position called on her to do. “My responsibilities included coordinating the executive council, which had five

representatives from five zones of North America and coordinating with them,” Şahin recalls. “Then we had the national training conference and a couple of national projects. There was lots of traveling, lots of long-distance calls.” Her presidency also oversaw the re-birth of the Field Youth Leadership Training Programs (commonly known as FYLTP). Organization of the FYLTPs demanded much of her. “It basically involved finding a place, getting speakers, finding leaders from different communities all over Canada, all over the United States, then having them for a weeklong program and ensuring that it happens the next year, as well,” she says. “It’s all about the details and knowing what goes into making something happen. You have to know every single aspect to make something run smoothly.” She carried those skills throughout her collegiate career and now her life managing a house full of homeschooled boys. Looking forward, she recognizes MYNA’s historic vision to assist Muslim American youth in exploring and developing their identity. She envisions adding to that a focus on specific aspects of Muslim youth’s lives. “Empowerment of the youth is something very practical,” Sahin says. “I don’t think MYNA has made that step. I was involved in the revival process and we tried to change MYNA and make it more practical, with the times, where Muslim youth would see a purpose in them joining it.”

From 1994 to 1995, MYNA continued its tradition of women in leadership with the