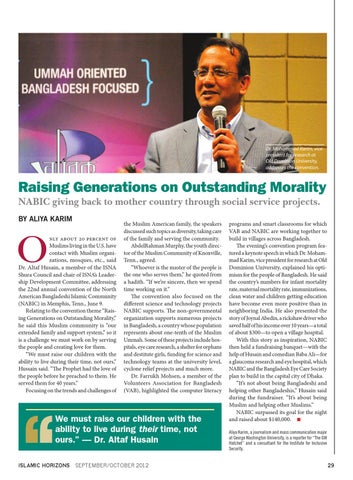 nly about 20 percent of Muslims living in the U.S. have contact with Muslim organizations, mosques, etc., said Dr. Altaf Husain, a member of the ISNA Shura Council and chair of ISNA’s Leadership Development Committee, addressing the 22nd annual convention of the North American Bangladeshi Islamic Community (NABIC) in Memphis, Tenn., June 9. Relating to the convention theme “Raising Generations on Outstanding Morality,” he said this Muslim community is “our extended family and support system,” so it is a challenge we must work on by serving the people and creating love for them. “We must raise our children with the ability to live during their time, not ours,” Hussain said. “The Prophet had the love of the people before he preached to them. He served them for 40 years.” Focusing on the trends and challenges of

the Muslim American family, the speakers discussed such topics as diversity, taking care of the family and serving the community. AbdelRahman Murphy, the youth director of the Muslim Community of Knoxville, Tenn., agreed. “Whoever is the master of the people is the one who serves them,” he quoted from a hadith. “If we’re sincere, then we spend time working on it.” The convention also focused on the different science and technology projects NABIC supports. The non-governmental organization supports numerous projects in Bangladesh, a country whose population represents about one-tenth of the Muslim Ummah. Some of these projects include hospitals, eye care research, a shelter for orphans and destitute girls, funding for science and technology teams at the university level, cyclone relief projects and much more. Dr. Farrukh Mohsen, a member of the Volunteers Association for Bangladesh (VAB), highlighted the computer literacy

We must raise our children with the ability to live during their time, not ours.” — Dr. Altaf Husain Islamic Horizons  September/October 2012

programs and smart classrooms for which VAB and NABIC are working together to build in villages across Bangladesh. The evening’s convention program featured a keynote speech in which Dr. Mohammad Karim, vice president for research at Old Dominion University, explained his optimism for the people of Bangladesh. He said the country’s numbers for infant mortality rate, maternal mortality rate, immunizations, clean water and children getting education have become even more positive than in neighboring India. He also presented the story of Joynal Abedin, a rickshaw driver who saved half of his income over 10 years—a total of about $300—to open a village hospital. With this story as inspiration, NABIC then held a fundraising banquet—with the help of Husain and comedian Baba Ali—for a glaucoma research and eye hospital, which NABIC and the Bangladesh Eye Care Society plan to build in the capital city of Dhaka. “It’s not about being Bangladeshi and helping other Bangladeshis,” Husain said during the fundraiser. “It’s about being Muslim and helping other Muslims.” NABIC surpassed its goal for the night and raised about $140,000.

Aliya Karim, a journalism and mass communication major at George Washington University, is a reporter for “The GW Hatchet” and a consultant for the Institute for Inclusive Security.