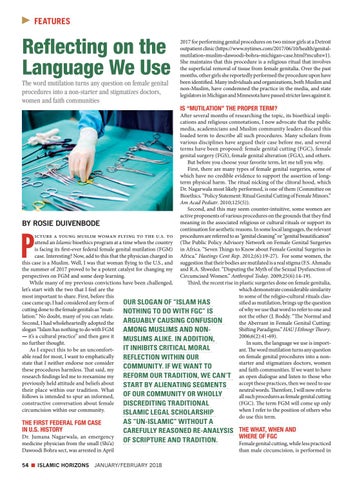 Reflecting on the Language We Use The word mutilation turns any question on female genital procedures into a non-starter and stigmatizes doctors, women and faith communities

2017 for performing genital procedures on two minor girls at a Detroit outpatient clinic (https://www.nytimes.com/2017/06/10/health/genitalmutilation-muslim-dawoodi-bohra-michigan-case.html?mcubz=1). She maintains that this procedure is a religious ritual that involves the superficial removal of tissue from female genitalia. Over the past months, other girls she reportedly performed the procedure upon have been identified. Many individuals and organizations, both Muslim and non-Muslim, have condemned the practice in the media, and state legislators in Michigan and Minnesota have passed stricter laws against it.

IS “MUTILATION” THE PROPER TERM?

After several months of researching the topic, its bioethical implications and religious connotations, I now advocate that the public media, academicians and Muslim community leaders discard this loaded term to describe all such procedures. Many scholars from various disciplines have argued their case before me, and several terms have been proposed: female genital cutting (FGC), female genital surgery (FGS), female genital alteration (FGA), and others. But before you choose your favorite term, let me tell you why. First, there are many types of female genital surgeries, some of which have no credible evidence to support the assertion of longterm physical harm. The ritual nicking of the clitoral hood, which Dr. Nagarwala most likely performed, is one of them (Committee on Bioethics. “Policy Statement: Ritual Genital Cutting of Female Minors.” Am Acad Pediatr. 2010;125(5)). Second, and this may seem counter-intuitive, some women are active proponents of various procedures on the grounds that they find meaning in the associated religious or cultural rituals or support its BY ROSIE DUIVENBODE continuation for aesthetic reasons. In some local languages, the relevant icture a young Muslim woman flying to the U.S. to procedures are referred to as “genital cleaning” or “genital beautification” attend an Islamic bioethics program at a time when the country (The Public Policy Advisory Network on Female Genital Surgeries is facing its first-ever federal female genital mutilation (FGM) in Africa. “Seven Things to Know about Female Genital Surgeries in case. Interesting? Now, add to this that the physician charged in Africa.” Hastings Cent Rep. 2012;(6):19-27). For some women, the this case is a Muslim. Well, I was that woman flying to the U.S., and suggestion that their bodies are mutilated is a real stigma (F.S. Ahmadu the summer of 2017 proved to be a potent catalyst for changing my and R.A. Shweder. “Disputing the Myth of the Sexual Dysfunction of perspectives on FGM and some deep learning. Circumcised Women.” Anthropol Today. 2009;25(6):14-19). Third, the recent rise in plastic surgeries done on female genitalia, While many of my previous convictions have been challenged, let’s start with the two that I feel are the which demonstrate considerable similarity most important to share. First, before this to some of the religio-cultural rituals clasOUR SLOGAN OF “ISLAM HAS case came up, I had considered any form of sified as mutilation, brings up the question cutting done to the female genitals as “mutiof why we use that word to refer to one and NOTHING TO DO WITH FGC” IS lation.” No doubt, many of you can relate. not the other (J. Boddy. “The Normal and ARGUABLY CAUSING CONFUSION Second, I had wholeheartedly adopted the the Aberrant in Female Genital Cutting: slogan “Islam has nothing to do with FGM Shifting Paradigms.” HAU J Ethnogr Theory. AMONG MUSLIMS AND NON— it’s a cultural practice” and then gave it 2006;6(2):41-69). MUSLIMS ALIKE. IN ADDITION, no further thought. In sum, the language we use is importIT INHIBITS CRITICAL MORAL As I expect this to be an uncomfortant. The word mutilation turns any question able read for most, I want to emphatically on female genital procedures into a nonREFLECTION WITHIN OUR state that I neither endorse nor consider starter and stigmatizes doctors, women COMMUNITY. IF WE WANT TO these procedures harmless. That said, my and faith communities. If we want to have REFORM OUR TRADITION, WE CAN’T an open dialogue and listen to those who research findings led me to reexamine my previously held attitude and beliefs about accept these practices, then we need to use START BY ALIENATING SEGMENTS their place within our tradition. What neutral words. Therefore, I will now refer to OF OUR COMMUNITY OR WHOLLY follows is intended to spur an informed, all such procedures as female genital cutting constructive conversation about female (FGC). The term FGM will come up only DISCREDITING TRADITIONAL circumcision within our community. when I refer to the position of others who ISLAMIC LEGAL SCHOLARSHIP do use this term.

AS “UN-ISLAMIC” WITHOUT A CAREFULLY REASONED RE-ANALYSIS THE WHAT, WHEN AND WHERE OF FGC OF SCRIPTURE AND TRADITION. Female genital cutting, while less practiced

than male circumcision, is performed in