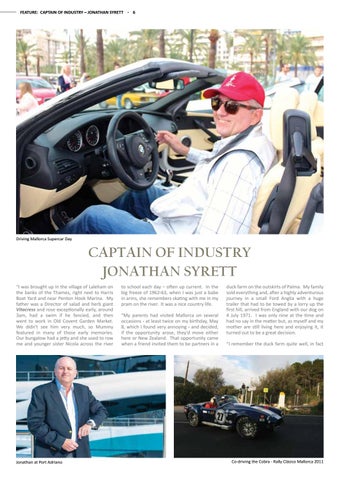 CAPTAIN OF INDUSTRY JONATHAN SYRETT “I was brought up in the village of Laleham on the banks of the Thames, right next to Harris Boat Yard and near Penton Hook Marina. My father was a Director of salad and herb giant Vitacress and rose exceptionally early, around 3am, had a swim if he fancied, and then went to work in Old Covent Garden Market. We didn’t see him very much, so Mummy featured in many of those early memories. Our bungalow had a jetty and she used to row me and younger sister Nicola across the river

to school each day – often up current. In the big freeze of 1962-63, when I was just a babe in arms, she remembers skating with me in my pram on the river. It was a nice country life. “My parents had visited Mallorca on several occasions - at least twice on my birthday, May 8, which I found very annoying - and decided, if the opportunity arose, they’d move either here or New Zealand. That opportunity came when a friend invited them to be partners in a

duck farm on the outskirts of Palma. My family sold everything and, after a highly adventurous journey in a small Ford Anglia with a huge trailer that had to be towed by a lorry up the first hill, arrived from England with our dog on 4 July 1971. I was only nine at the time and had no say in the matter but, as myself and my mother are still living here and enjoying it, it turned out to be a great decision. “I remember the duck farm quite well, in fact