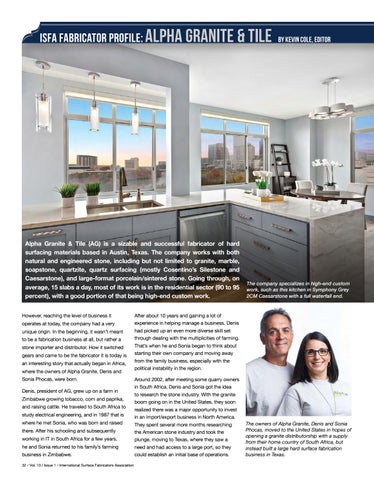 Alpha Granite & Tile (AG) is a sizable and successful fabricator of hard surfacing materials based in Austin, Texas. The company works with both natural and engineered stone, including but not limited to granite, marble, soapstone, quartzite, quartz surfacing (mostly Cosentino’s Silestone and Caesarstone), and large-format porcelain/sintered stone. Going through, on average, 15 slabs a day, most of its work is in the residential sector (90 to 95 percent), with a good portion of that being high-end custom work. However, reaching the level of business it operates at today, the company had a very unique origin. In the beginning, it wasn’t meant to be a fabrication business at all, but rather a stone importer and distributor. How it switched gears and came to be the fabricator it is today is an interesting story that actually began in Africa, where the owners of Alpha Granite, Denis and Sonia Phocas, were born. Denis, president of AG, grew up on a farm in Zimbabwe growing tobacco, corn and paprika, and raising cattle. He traveled to South Africa to study electrical engineering, and in 1987 that is where he met Sonia, who was born and raised there. After his schooling and subsequently working in IT in South Africa for a few years, he and Sonia returned to his family’s farming business in Zimbabwe. 32 • Vol. 13 / Issue 1 • International Surface Fabricators Association

The company specializes in high-end custom work, such as this kitchen in Symphony Grey 2CM Caesarstone with a full waterfall end.

After about 10 years and gaining a lot of

experience in helping manage a business, Denis had picked up an even more diverse skill set

through dealing with the multiplicities of farming. That’s when he and Sonia began to think about starting their own company and moving away from the family business, especially with the political instability in the region.

Around 2002, after meeting some quarry owners in South Africa, Denis and Sonia got the idea

to research the stone industry. With the granite

boom going on in the United States, they soon

realized there was a major opportunity to invest in an import/export business in North America. They spent several more months researching the American stone industry and took the

plunge, moving to Texas, where they saw a

need and had access to a large port, so they could establish an initial base of operations.

The owners of Alpha Granite, Denis and Sonia Phocas, moved to the United States in hopes of opening a granite distributorship with a supply from their home country of South Africa, but instead built a large hard surface fabrication business in Texas. 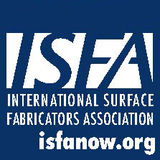