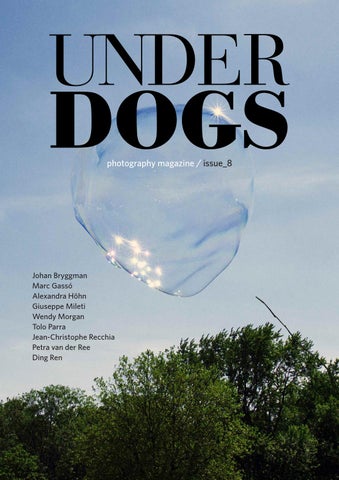 Curator/Editor/Designer: Isa Gelb Cover & back cover: Alexandra Hรถhn All images and text published in Underdogs are the sole property of the featured photographers. NO image can be reproduced, edited, copied or distributed without the express written permission of its legal owner. NO part of the publication may be reproduced in any form without the written consent of the publisher.

One aspect of photography that intrigues me is the diﬀerence between photos produced “for the wall”—e.g., for an art gallery space—and photos produced “for the table,” e.g., for a magazine such as Underdogs. (I note in passing that we could speak of a third category, photos produced “for the Internet,” which, in my mind, combine qualities of the ﬁrst two categories.) The diﬀerences between such modes of production have been explicitly discussed by the critic Walter Benjamin, and more recently by Michael Fried in his book Why Photography Matters as Art as Never Before. Acknowledging their contributions to the discussion, I wish to guide it in my own direction. For me, the diﬀerence between photos produced for the wall and for the table mirrors the “professional” and “amateur” divide in photography. As the title of Underdogs is a nod to the status of amateur photographers, this divide is one that has interested me from the very beginning. I have often questioned the premises of the divide between professional and amateur photography, and I continue to do so with respect to image quality. However, if I were to concede such a divide, it would be on the basis of the ability to make a photo presentable on a wall. This is where I believe professional photography has a unique edge. I feel sharp pangs of frustration whenever a photo I love mysteriously loses its power when it is framed and hung on a wall. This feeling is compounded when I am forced to admit that an image I would otherwise ﬁnd middling is more eﬀective in the same context. Because there are always forces at play outside of the image itself that inﬂuence its reception, it would be hypocritical of me to say a type of “gamesmanship” is occurring on the wall that does not occur on the page. If anything, I would take pride in the ability to present photos in a way that is subtly ﬂattering, when compared to a completely random arrangement. If similar processes occur on the wall and on the page, why do I feel there is such a major diﬀerence between one and the other? Could it be that walls are the hallmark of institutions, which impose their values, such as professionalism, subconsciously, in a way that can’t be ignored when viewing the photo on display? Or maybe the page creates a more intimate relationship that envelops the viewer, one that has the power to resist such institutional forces? I also wonder if the relation I described between the wall and the page is a necessary one. I am not a gallery curator, so some of my frustration may be due to inexperience. At this point in time, these issues are food for thought for me about the place of a magazine such as Underdogs, and the deeper ways I can work as a curator, editor, and designer to shape the reception of photography.

HIS CAMERAS Leica M6, Mamiya 7 II, Ricoh GR1s for personal and a Fuji X-T1 for work.

HER CAMERAS I use a Contax T2, a Nikon F3 and sometimes a Sony Nexx.