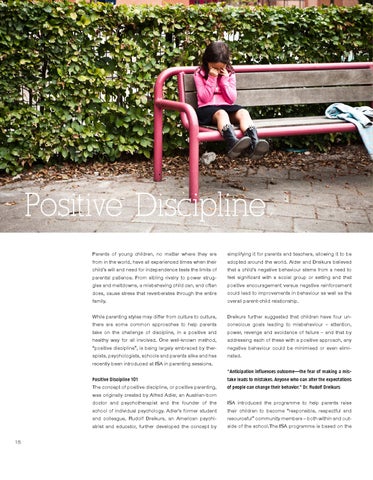 Positive Discipline Parents of young children, no matter where they are from in the world, have all experienced times when their child’s will and need for independence tests the limits of parental patience. From sibling rivalry to power struggles and meltdowns, a misbehaving child can, and often does, cause stress that reverberates through the entire

adopted around the world. Alder and Dreikurs believed that a child’s negative behaviour stems from a need to feel significant with a social group or setting and that positive encouragement versus negative reinforcement could lead to improvements in behaviour as well as the

While parenting styles may differ from culture to culture,

there are some common approaches to help parents take on the challenge of discipline, in a positive and healthy way for all involved. One well-known method, “positive discipline”, is being largely embraced by therapists, psychologists, schools and parents alike and has recently been introduced at ISA in parenting sessions.

conscious goals leading to misbehaviour – attention, power, revenge and avoidance of failure – and that by addressing each of these with a positive approach, any negative behaviour could be minimised or even eliminated. “Anticipation influences outcome—the fear of making a mis-

take leads to mistakes. Anyone who can alter the expectations

The concept of positive discipline, or positive parenting,

of people can change their behavior.” Dr. Rudolf Dreikurs

was originally created by Alfred Adler, an Austrian-born doctor and psychotherapist and the founder of the school of individual psychology. Adler’s former student and colleague, Rudolf Dreikurs, an American psychiatrist and educator, further developed the concept by 18

simplifying it for parents and teachers, allowing it to be

ISA introduced the programme to help parents raise their children to become “responsible, respectful and resourceful” community members – both within and outside of the school.The ISA programme is based on the 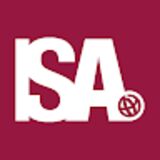 The International School of Amsterdam