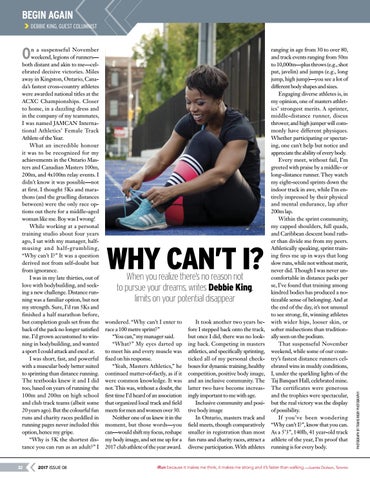 n a suspenseful November weekend, legions of runners— both distant and akin to me—celebrated decisive victories. Miles away in Kingston, Ontario, Canada’s fastest cross-country athletes were awarded national titles at the ACXC Championships. Closer to home, in a dazzling dress and in the company of my teammates, I was named JAMCAN International Athletics’ Female Track Athlete of the Year. What an incredible honour it was to be recognized for my achievements in the Ontario Masters and Canadian Masters 100m, 200m, and 4x100m relay events. I didn’t know it was possible—not at first. I thought 5Ks and marathons (and the gruelling distances between) were the only race options out there for a middle-aged woman like me. Boy was I wrong! While working at a personal training studio about four years ago, I sat with my manager, halfmusing and half-grumbling, “Why can’t I?” It was a question derived not from self-doubt but from ignorance. I was in my late thirties, out of love with bodybuilding, and seeking a new challenge. Distance running was a familiar option, but not my strength. Sure, I’d ran 5Ks and finished a half marathon before, but completion goals set from the back of the pack no longer satisfied me. I’d grown accustomed to winning in bodybuilding, and wanted a sport I could attack and excel at. I was short, fast, and powerful with a muscular body better suited to sprinting than distance running. The textbooks knew it and I did too, based on years of running the 100m and 200m on high school and club track teams (albeit some 20 years ago). But the colourful fun runs and charity races peddled in running pages never included this option, hence my gripe. “Why is 5K the shortest distance you can run as an adult?” I

WHY CAN’T I? When you realize there’s no reason not to pursue your dreams, writes Debbie King, limits on your potential disappear

wondered. “Why can’t I enter to race a 100 metre sprint?” “You can,” my manager said. “What?” My eyes darted up to meet his and every muscle was fixed on his response. “Yeah, Masters Athletics,” he continued matter-of-factly, as if it were common knowledge. It was not. This was, without a doubt, the first time I’d heard of an association that organized local track and field meets for men and women over 30. Neither one of us knew it in the moment, but those words—you can—would shift my focus, reshape my body image, and set me up for a 2017 club athlete of the year award.

It took another two years before I stepped back onto the track, but once I did, there was no looking back. Competing in masters athletics, and specifically sprinting, ticked all of my personal checkboxes for dynamic training, healthy competition, positive body image, and an inclusive community. The latter two have become increasingly important to me with age. Inclusive community and positive body image In Ontario, masters track and field meets, though comparatively smaller in registration than most fun runs and charity races, attract a diverse participation. With athletes

ranging in age from 30 to over 80, and track events ranging from 50m to 10,000m—plus throws (e.g., shot put, javelin) and jumps (e.g., long jump, high jump)—you see a lot of different body shapes and sizes. Engaging diverse athletes is, in my opinion, one of masters athletics’ strongest merits. A sprinter, middle-distance runner, discus thrower, and high jumper will commonly have different physiques. Whether participating or spectating, one can’t help but notice and appreciate the ability of every body. Every meet, without fail, I’m greeted with praise by a middle- or long-distance runner. They watch my eight-second sprints down the indoor track in awe, while I’m entirely impressed by their physical and mental endurance, lap after 200m lap. Within the sprint community, my capped shoulders, full quads, and Caribbean descent bond rather than divide me from my peers. Athletically speaking, sprint training fires me up in ways that long slow runs, while not without merit, never did. Though I was never uncomfortable in distance packs per se, I’ve found that training among kindred bodies has produced a noticeable sense of belonging. And at the end of the day, it’s not unusual to see strong, fit, winning athletes with wider hips, looser skin, or softer midsections than traditionally seen on the podium. That suspenseful November weekend, while some of our country’s fastest distance runners celebrated wins in muddy conditions, I, under the sparkling lights of the Taj Banquet Hall, celebrated mine. The certificates were generous and the trophies were spectacular, but the real victory was the display of possibility. If you’ve been wondering “Why can’t I?”, know that you can. As a 5’3”, 140lb, 41 year-old track athlete of the year, I’m proof that running is for every body.

iRun because it makes me think, it makes me strong and it’s faster than walking.—Juanita Dickson, Toronto 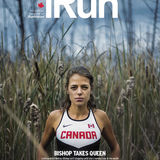