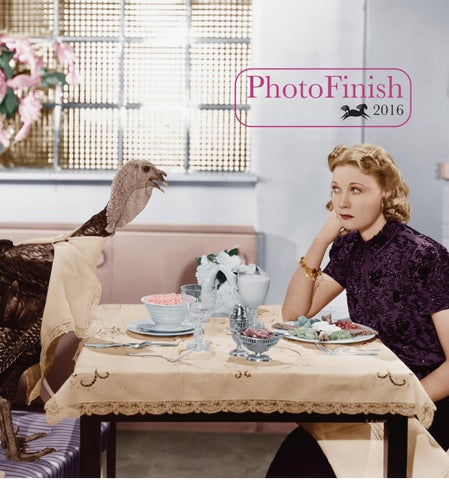 Reasons for Cremating My Mother, Vol. 2

Our Kitchen Is a Very Large Room

Fowl Play A Turkey Mansplains the World Lunch with the Tame Turkey Fork on the Left, Spoon on the Right

When we selected the photo for this year’s IHLR PhotoFinish, way back in May of 2016, we didn’t realize how politically relevant the photo might become after the election . . . if Donald Trump won. Well, honestly, we didn’t imagine that Donald Trump would win, that so many Americans, particularly white evangelical women, would get on board with his atrocious behavior, his racism, bigotry, misogyny, fearmongering, and lack of experience. Six months ago, we thought this picture was retro, old, even slightly comical. In response to the photo, back in June, we received stories and poems revolving around the concept of women dating turkeys, and several of them were so good we accepted them for inclusion in this year’s PhotoFinish. But when we look at the photograph today, we think about Arianne Zucker being asked to hug Trump and Billy Bush right after they’ve bragged about their ability to force women to submit to sexual advances. We picture a white man on a debate stage stalking his female opponent. Or legislators down in Texas denying Planned Parenthood federal funding from Medicaid, meaning denying poor women healthcare. We think about the Rockettes. And on and on. In fact, the photo sings with so much political relevance for women that we’re sorry we can’t use it as the cover for our upcoming State of the Union issue. What we have, here, in our midnight year-end finale are stories and poems that depict women attached to cocky men, women learning lessons, women seeking revenge, women mourning. We like this collection for its powerful flash pieces, for how cohesive it is. Today, we’re especially fond of the magical way these manuscripts have taken on new meaning. Starting with Akua Lezli Hope’s “Warning,” this year’s PhotoFinish winner, a poem about jive turkeys and fathers who warn their daughters about them. Hmm. Too bad more American men—and women—aren’t standing up and calling a turkey a turkey. Here’s hoping 2017 is filled with raised voices and lots of activism.

Akua Lezli Hope Her father had warned her about jive turkeys again and again: they fake, feign, tom, pretend, with one end in sight. Sheâ&amp;#x20AC;&amp;#x2122;d been dazzled by his iridescence, preening, twirling in fall sunlight, a gilded theater of leaves sighing and swirling in a warm September breeze. Heâ&amp;#x20AC;&amp;#x2122;d strutted, danced, and chuckled at her humor, fed her hunger to be heard and companioned. Now, here she was, stuck with him, incoherent. Across the set piece of dining table, their differences yawned and gaped as widely as his toothless piehole. The slack wobble of his beige wattle, his flaccid, pale snood, betrayed his age. He looked peevish, too willing to pounce and peck at her slightest breach. She banished the reproving whisperings echoing within, watch out for them, and focused on surviving the bald, fluorescent moment.

Katherine DiBella Seluja Everyone laughed when she announced their engagement. The weight of tradition and a flood of clichés overtook them. Was she truly considering trussing her life to an icon? And what of the unavoidable anxiety that would await her every year as autumn approached? How could she explain the comfort of his bulging breast, the warmth of his down at night, the way his wattle bobbed in his sleep? Tom is really such a lovely creature; you only need to get to know him better and overlook his occasional brooding, she insisted. When they realized she was determined and no threat of oven or ax would dissuade her, the family relented and shopped for appropriate gifts: corn meal grinders, seed bins, no feather pillows, no gravy boats. He had pursued her. Calling at all hours, displays at her front door, and always the small chips in the wooden door frame, that incessant need to peck, his calling card. Going out was usually awkward. Sometimes they strutted the sidewalk, but usually they’d meet in the small orchard at the side of her family’s farm. There, he was truly happy. Stuffing himself with fruit, clawing the dirt, warbling love coos from the back of his throat. On the rare evening they would take in a movie, he never seemed to enjoy it. The popcorn too buttered, the seats too tight, and the proximity to the local shooting range made his feathers stand on edge. He knew he had won her over the night they were caught in a rainstorm. He spread his wings to shelter her. How to describe the peace, the satiation of the feathered palace he became? Of course, they stayed in for the holidays.

A Turkey Mansplains the World Michael Metivier All flesh is grass—well, it used to be. Now few can tell between bluestem and burdock leaves. Cynicism is a reflex pinging just below my wishbone that no cherry phosphate can subdue— the world wants our necks, and Auld Lang Syne don’t mean shit to anyone but me and you, babe, me and you.

Lunch with the Tame Turkey

Bathed in the afternoon light, we sit at table together and sup vegan, in the new wayâ&amp;#x20AC;&amp;#x201D; Tofurkey for me, kibble for you. Our meals delivered in packages, no foraging for us. My home-permed hairdo, your decorous napkin, emphasize our domesticated life, passion and common sense bred out of us. Unmodified, we were handfuls, nuisances. But oh, how I wish we were wild once more, proud and passionate, national bird majestic, bright-plumaged, madcap and witty, free.

Fork on the Left, Spoon on the Right

Sir, it’s not polite to stare, though I will admit I fancy you are quite a catch. You look like you are living each day as if it were your last. A guest at a feast where they’ll serve your head on a silver platter. I mean this in the sweetest way, like how skydiving or shark wrangling make for a good story at the dinner party. Is this a setup? Were we destined to meet? No? Well, let’s look like we are conspiring before you run away with the breadbasket. Do you pray before you eat? Do you consider it your last meal? Poison, heart attack, &amp; food lodged in the throat are the biggest hazards. Don’t you think mouths are for more than just eating? I could kiss each forkful. I could bite your little neck. What I’m trying to say is let’s lift our glasses, as if we’re old friends, before admitting surely one of us is at the table with a knife folded in our lap.

Reasons for Cremating My Mother, Vol. 2

She never wanted to be braised, barbequed, or roasted. She only ever wanted to be left as char. My mother, who always took the burnt bits for herself, knew that precautions had to be taken, plans instituted, or she would be sifted out again. If there was even a morsel of her left, theyâ&amp;#x20AC;&amp;#x2122;d be able to revive her with a smear of butter, a drop of gravy.

Our Kitchen Is a Very Large Room Bryce Emley

I’ve been keeping such dull company these days: an empty seat waiting for my hunger to stay still, a woman whose eyes drift with the indifference of clouds— I smell thunder on her skin when she reaches for the salt. It gets to be so tranquil, making a home for my appetite: finding vases to fit the shape emptiness blossoms into, talking patterns with the kitchen’s echo, setting a table where we rehearse our quiet. I want something new to be consumed by, than what my body longs for—a tether I can call my own. It’s so quiet I can forget I’m awake until the light switch cracks the room open, singing.

Contributors REILLY COX is a recent graduate of Washington College. He lives, writes, and trav-

els out of Baltimore, Maryland.

BRYCE EMLEY’s poetry and nonfiction can be found in Boston Review, Best American Experimental Writing 2015, The Normal School, Mid-American Review, and Prairie Schooner. He serves as Poetry Editor of Raleigh Review. KARIN FRANK’s poetry and prose have been published in both literary and genre venues in the United States and abroad. AKUA LEZLI HOPE, winner of this year’s PhotoFinish, is a creator who uses sound, words, fiber, glass, and metal to create poems, patterns, stories, music, ornaments, adornments, and peace, whenever possible. She has won two fellowships from the New York Foundation for the Arts, a Ragdale U.S.-Africa Fellowship, and a Creative Writing Fellowship from The National Endowment for The Arts. She is a Cave Canem fellow. Her manuscript, Them Gone, won the Editor’s Prize hosted by Red Paint Hill and will be published in Fall 2016. She has also published 114 crochet designs. A paraplegic, she’s started a paratransit nonprofit so that she can get around her country town. MICHAEL METIVIER is a writer and editor living in southern Vermont. His

KATHERINE DIBELLA SELUJAâ&amp;#x20AC;&amp;#x2122;s work is informed by themes of illness and

healing. Winner of the Southwest Writers Poetry Award and twice nominated for a Pushcart, her work has appeared in Blink-Ink, bosque, Connotation Press, Crab Creek Review, Right Hand Pointing, Santa Ana River Review, and Santa Fe Literary Review, among others. Her first collection, Gather the Night, focuses on the impact of mental illness and is forthcoming in 2018 from University of New Mexico Press.

ALISON THUMEL lives and writes in Chicago. She is a graduate of the University of Chicago, where she was awarded the Elsie F. Filippi Memorial Prize in Poetry. Her poems have recently appeared in, or are forthcoming in, Hobart, Banshee, and DIAGRAM, among others. Her first chapbook won Salt Hillâ&amp;#x20AC;&amp;#x2122;s Dead Lake Chapbook Contest and will be published in 2017.

Iron Horse Literary Review would like to thank its supporters, without whose generous help we could not publish Iron Horse successfully. In particular, we would like to thank our benefactors and equestrian donors. If you would like to join our network of friends, please contact us at ihlr.mail@gmail.com for information on the various levels of support. Benefactors ($300) Wendell Aycock Lon and Carol Baugh Beverly and George Cox Sam Dragga Madonne Miner Charles and Patricia Patterson Gordon Weaver Equestrian ($3,000 and above) TTU English Department, Chair Bruce Clarke TTU College of Arts &amp; Sciences, Dean Brent Lindquist TTU Graduate School, Dean Mark Sheridan TTU Provostâ&amp;#x20AC;&amp;#x2122;s Office, Provost Rob Stewart TTU Presidentâ&amp;#x20AC;&amp;#x2122;s Office, President Lawrence Schovanec

Our annual finale, released at midnight on New Year's Eve, contains poems and prose in response to a selected photo. 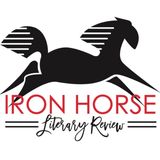