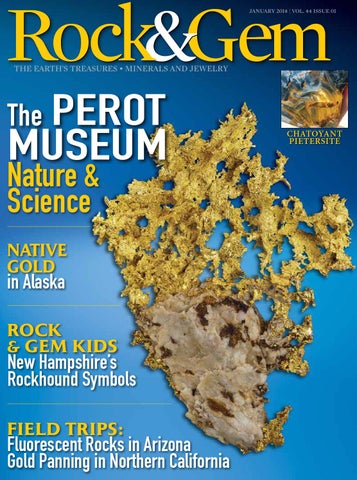 THE EARTH’S TREASURES • MINERALS AND JEWELRY

Part I: An Exciting Educational Facility in Downtown Dallas

In the Texas Instruments Engineering and Innovation Hall, students who are attracted to electronics and the future can build a robot or a skyscraper, or create music to their liking.

The mineral exhibits in the Lyda Hill Hall of Gems and Minerals are carefully spaced for viewing. Each case has a keypad, with which visitors can access detailed information about the various minerals.

he perennial problem all museums face, whether private or public, is financing. There never seems to be enough money for programs, staffing, and the acquisition and maintenance of exhibits. The Perot Museum of Nature and Science, in downtown Dallas, Texas, is an exception to this rule. Thanks to a very active core group of civic-minded people, the construction and operation of the museum have been completely privately financed! Not a single dollar of federal, state or local money was put into it. This dedicated group has also ensured that the museum is very well endowed, guaranteeing its future. How many museums can say that?

The Perot Museum has an amazing assemblage of interactive displays and exhibits on many subjects. Its array of exhibits and programs is the envy of any museum staff. It has enjoyed active volunteer support from its very inception and today is setting the standard for what a premier educational institution must be. Dallas has long been a museum town. In 1936, the Dallas Museum of Natural History was established in Fair Park, on the State Fair of Texas’ Fair Grounds. In 1946, the Dallas Health Museum opened. By 1981, the Museum of Natural History had morphed into the Science Place in Fair Park. This was joined, in 1995, by the Dallas Children’s Museum. With such a panoply of museums in Fair Park, the Perot Museum’s forward-thinking CEO, Nicole Small, developed a plan to combine three museums—the Children’s Museum, the Dallas Museum of Natural History, and Science Place—into a new museum. These formed the core of the new campus of the Perot Museum of Nature and Science, called Victory Park. Planning for the new facility began in 2006. Businesswoman and philanthropist Lyda Hill donated 7 acres for the new museum, and the gem and mineral exhibit hall was named in her honor. Members of the Ross and Margot Perot family made large donations, with the result that the new facility bore their family name. Other halls in the museum are named for major contributors such as the Hunt Petroleum Corp., T. Boone Pickens, The Rees-Jones Foundation, the Moody Foundation, and the Texas Instruments Foundation. A fundraising goal of $180 million was set for the construction and support of the multifaceted nature and science museum. By being privately funded and operated, the museum would remain under the control of a citizen’s board rather than a government

agency. The target date for the completion of the museum was December 2012. By November 2011, the entire amount of the museum construction cost had been raised, and the design and completion of all the planned museum programs moved ahead. The creation of the museum involved more than 2,500 people, from designers to planners to educators. A critical concern in the design of the Perot Museum was its environmental impact. Designers followed “green building practice” guidelines developed by the federal government, employing features that would conserve water, take advantage of natural lighting, and make the building “sustainable”, not totally dependent on outside water and energy supplies. All the rain­ water that falls on the museum property is collected and re-used within the structure and grounds. This recycling of non-potable water dropped external water use to 26% of total needs. Solar-powered water heaters, maximum use of sunlight in the building, and low-energy LED lighting are the norm here. Its design and construction have brought the Perot Museum recognition as a major environmentally friendly building, so it is used as an example to teach the modern scientific principles of conservation. Two temporary exhibits in the Rees-Jones Foundation Dynamic Earth Hall directly involve visitors in the concept of conservation of energy and resources. Visitors can build works of art using recyclable materials, all of which will be recycled again once these temporary exhibits close. The museum building itself looks like a stylized block of limestone, gray in color, with prominent horizontal layers of stone. The 11 permanent exhibit halls are the Moody Family Children’s Museum, the Lamar Hunt Family Sports Hall, the Discovering Life Hall, the Being Human Hall,

Kids and adults love to spin the wheel that opens and closes the huge grape-jelly geode on display in the Lyda Hill Gems and Minerals Hall.

The design and construction of the Perot Museum of Nature and Science have brought it recognition as a major environmentally friendly building.

the Texas Instruments Engineering and Innovation Hall, The Rees-Jones Foundation Dynamic Earth Hall, the Tom Hunt Energy Hall, the Lyda Hill Gems and Minerals Hall, the Expanding Universe Hall, the T. Boone Pickens Life Then and Now Hall, and the Rose Hall of Birds. Each is designed to stimulate curiosity, demonstrate scientific principles, and provide interactive opportunities for young and old alike.

The Perot Museum of Nature and Science from page 13

In the Rees-Jones Dynamic Earth Hall you can experience a simulated earthquake and use the tubular Tornado Simulator to create a tornado vortex, using mist to form a funnel cloud.

long treadmill and watching yourself and the athlete on a huge, interactive video screen. You can even run against a Tyrannosaurus rex or a cheetah, the fastest of the mammals. Sports injuries we’ve heard about, but never seen are shown through X-rays. Since the oil and gas industries are such an important part of the economy of Texas,

Few of us have experienced a real earthquake, but in the Rees-Jones Foundation Dynamic Earth Hall, you can walk onto a small platform and activate the floor to simulate an earthquake at three different levels of intensity. Kids love this one. Just as remarkable is the Tornado Simulator, an enclosed tubular unit in which a machine actually creates a tornado vortex, using mist to form a funnel cloud. This simulator can be operated by visitors, and is another activity kids love! The Moody Family Children’s Museum is alive with all sorts of interactive activities. Kids can play at everyday grownup tasks like shopping. Healthy foods like fruits and vegetables are emphasized at the Mini-Dallas Farmer’s Market. Volunteer staff members are on hand to feed and maintain terrarium animals, to the delight of children. Energetic kids can even climb all over the Dallas Skyline Climber, a replica of some of the city’s important landmarks. I was particularly impressed by the small area set aside for parents to park their strollers, freeing them to participate with their children in an assortment of activities. For students who are attracted to electronics and the future, what is more interesting than building your own robot? In the Texas Instruments Engineering and Innovation Hall, this is exactly what visitors can do. They can even build a skyscraper or create music to their liking. Teenagers especially enjoy the Sports Run in the Lamar Hunt Family Sports Hall. Here, you can actually compete against your favorite athlete, such as Dallas Cowboys football player Felix Jones, by running on a 55-foot-

you would expect to see exhibits in the museum that are devoted to these energies. In the Tom Hunt Energy Hall, guests are able to take a virtual trip down into a 9,000-foot oil well and learn about natural gas fracking. Drilling for oil on land and at sea are also described and demonstrated in some detail. I found the treatment of the human body in the Being Human Hall fascinating. One exhibit lets you see what goes on inside your body during vigorous activities by projecting your body next to an instructor’s body. While you mimic their actions, you can watch your movements in a motionimaging device. I was particularly interested in placing my hand under an X-ray machine so I could watch the flow of blood through my veins. That assured me that I was still alive! The Discovering Life Hall examines the evolution of life on earth, from its beginnings 4 billion years ago. The major theme of the exhibits is how the ability to adapt to the changes in their environments enabled life forms to survive and evolve—or how failure to adapt drove them to extinction— over the eons. The T. Boone Pickens Life Then and Now Hall interprets the fossil record to explain how dinosaurs lived and how plants and animals adapted to changing conditions on Earth throughout the geological ages. Of course, all the kids love the dinosaurs featured in this hall.

There are plenty of interactive opportunities in the T. Boone Pickens Life Then and Now Hall.

In the Being Human Hall visitors can learn a great deal about the human body and its functions.

The closing of the planetarium at Fair Park did not eliminate astronomy from the Perot Museum program. The exhibits in the Expanding Universe Hall trace the development of the universe from its birth through the Big Bang up to the present age. Through 3D animation, visitors can watch the Big Bang unfold and take a simulated journey through the solar system. One of the most unusual interactive exhibits in the Perot Museum is the Rose Hall of Birds. You would expect this hall to be full of stuffed birds and maybe even some of our feathered friends in cages. Visitors are in for a surprise, though: They can actually build their own bird. You select all the parts of a bird, including the food it eats, and hear the songs it sings. Once done, you don 3D glasses and watch your feathered friend fly! Can you imagine how you would have reacted to this when you were a kid? How fortunate the children of Dallas and surrounding towns are to have such a modern, interactive educational facility just a field trip away from their school! Many school systems today can’t afford to finance field trips. Texas school districts are fortunate to be able, through cooperation with the Perot Museum, to offer teachers and their classes such a golden opportunity. This accounts in part for the nearly 800,000 visitors to the Perot Museum each year! As a rockhound, I hope teachers make sure their students spend time in the Lyda Hill Gems and Minerals Hall, for that is where future rockhounds are born. I’ll describe this hall in detail in the next issue. For a preview, see On the Rocks (p. 48).

Rock & Gem Magazine features The Perot Museum of Nature and Science in Dallas, Texas. Their new mineral hall has changed the standard for fine mineral and gemstone display, and the article also introduces the Dallas Mineral Collecting Symposium to readers.