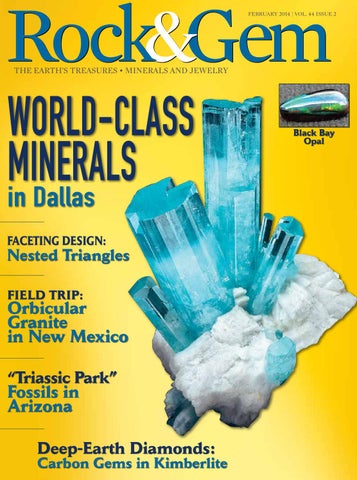 THE EARTH’S TREASURES • MINERALS AND JEWELRY

The mineral exhibits in the Lyda Hill Gems and Minerals Hall, carefully spaced for viewing, all boast a keypad, so each mineral is described in depth.

he emergence of the Perot Museum of

rience. With strong financial support from both

Nature and Science from several older,

national and local businesses and a large contin-

This article will focus on the exception-

al collection of minerals housed in the Lyda Hill

from biology to astronomy to engineering. Ma-

The Perot Museum is a technologically ad-

are honored by having portions of the museum

while offering an exceptional educational expe-

The gems and minerals on display in Hill’s namesake hall are unusual in that they are, for the most part, not owned by the museum, but are on more or less permanent loan from exceptionally fine, privately owned collections. I think that’s a unique situation for a museum. Among advanced collectors worldwide, these private collections are recognized as being well above average in quality. Many of them have been featured in various gem and mineral magazines, including a special supplement to The Mineralogical Record. Mineral dealer Daniel Trinchillo was instrumental in designing the exhibits, worked diligently to obtain specimens on loan, and helped during the construction of the Gems and Minerals Hall. The mineral displays remain in place for a period of time, then are changed to showcase other, equally superb specimens. This means returning visitors will always see something new and exceptional. As you walk into the hall, you are immediately impressed by what looks like a huge group of cubic crystals on one side of the entrance. This remarkable replica of a pyrite crystal group sets the tone for what you will see as you continue your journey through the hall. On the right, a screen displays atomic crystal structures and photos of real crystals, including the world’s largest selenite crystals, which are found in a deep cavern in the Naica mine (Chihuahua, Mexico). These amazing crystals are up to 40 feet long and 4 feet thick. I’ve been fortune enough to visit and write about this cave in the past (“Subterranean Wonders”, September 2001 Rock &amp; Gem). Next, your eye catches sight of two sparkling, yellow, crystallized gold specimens. The monster of the pair is the third-largest known nugget. It was found by three Australians who were searching a known gold area in Western Australia with a metal detector. The nugget weighs in at just over 63 troy pounds! Next to the nugget is a beautifully crystallized gold that branches

aesthetically out of a mass of white quartz. This specimen is from California, which is currently America’s best-known source of crystallized gold. There is more gold in other exhibits. One piece that caught my eye is another California specimen of exceptional beauty that is on loan from the Marc Weill collection. This lovely specimen rivals the best examples held by other museums. These golds are just the beginning of an amazing selection of species. Another display case holds graceful examples of wire silver from Norway and Germany, two of the world’s finest sources. The silvers are masses of curving wires that emerge gracefully out of solid matrix. If you like a particular silver specimen, you can turn to an interactive image of the display and touch the picture of your favorite silver to view

TOP LEFT:  Some of the world’s finest mineral and gem specimens are tastefully displayed in the Lyda Hill Gems and Minerals Hall. TOP RIGHT:  Fine fluorescent minerals are among those that are on loan to the Perot Museum from exceptional private collections. BOTTOM RIGHT:  More common minerals like calcite and quartz complement the exotic species like fine zeolites, sulfides, silver and gold.

the history of and technical information about it. Every mineral exhibit is accompanied by one of these interactive, educational displays.

The motion capture technology display in the Being Human Hall allows visitors to explore movement by competing against known athletes, while watching their bodies’ responses on a screen.

opens, like a clamshell, to reveal its gorgeous, purple quartz crystal-lined interior. Turn the wheel in reverse, and the geode slowly closes again. When I was there, kids were standing in line for a turn at the Grape Jelly Geode wheel. That’s really an interactive exhibit! Brazil is known worldwide as a major source of gem minerals, many of them found in a type of rock known as pegmatite. The Lyda Hill hall displays are rich in pegmatite gem crystals. Here and there through the exhibit hall, you’ll find lovely single crystals of aquamarine, heliodor, morganite and elbaite. One display of particular note caught my eye. It is an elbaite with 2-foot-long gemmy, multicolor crystals about as thick as your finger spraying out from a cluster of smaller crystals. Trinchillo found the specimen in pieces in a gem pocket at the Pederneira mine (Minas Gerais), and painstakingly repaired it. Sitting regally in its own display case, the Pederneira elbaite is on loan from the Marc Weill collection in New York. You can read more about the Weill collection in the On the Rocks column in the January 2014 issue. Naturally, the Gems and Minerals Hall boasts a lovely selection of many species of crystals. Calcite, quartz, and other common

Of the assortment of native silver specimens on display, I particularly liked the graceful wire cluster from the Marc Weill collection, but there are several others, the likes of which you seldom see. Just inside the entrance to the hall is a unique mineral display consisting of a huge amethyst geode. We’ve all seen these huge cavities lined with richly hued purple amethyst. They are highly prized as decorative pieces, adorning offices, public buildings, and even private residences. I have a nice 3-foot-high amethyst geode section from Brazil displayed in the front entry of my home. The amethyst geode display in the Lyda Hill hall is special, perhaps unique. The vug measures a full 4 feet from top to bottom. Such monster amethyst geodes are currently being mined near the border of Brazil and Uruguay, and are not unusual or rare, but the Perot Museum amethyst geode is unusual for the manner in which it is displayed. The vug, affectionately called the “Grape Jelly Geode”, stands upright with both halves closed, showing only its rough, very drab, and unattractive exterior. It is mounted on a metal framework of heavy strap iron. In front of the display case is a large, shiny wheel. When you spin the wheel, the geode slowly

The Moody Family Children’s Museum provides a host of interactive areas where kids can learn while they play.

species complement the more exotic minerals, like fine zeolite specimens from India, choice sulfide species, wonderful wire silvers, brilliant red rhodochrosites, lemonyellow sulfurs, and beautifully crystallized fluorites. The strong support of advanced collectors who have loaned multiple specimens has made these displays possible. One of the very enjoyable interactive displays in the Gems and Minerals Hall is a huge screen with 12 lighted panels. Nearby is a console with images of various popular minerals—including rhodochrosite, quartz, calcite and fluorite—on it. Select any one of these images on the console by touching it, and the huge screen lights up with a series of superb photographs of your chosen mineral. Many of the images are of trophywinning minerals, along with others that are among the finest examples ever found for each species. The photographs are from the files of mineral film company BlueCap Productions of Honolulu, Hawaii. Its wellknown “What’s Hot” series of DVDs document major mineral shows like Tucson and Munich. It has been my pleasure to co-host some of those DVDs, which you can order at www.bluecapproduc​tions.com. When you arrange a visit to the Perot Museum—and everyone should—you had best plan ahead. The museum is so popular that it hosted between 700,000 and 800,000 visitors last year. The mu­ seum has to schedule visitors because so many people want to visit. As of this writing, the museum is booked through the year 2015. Like any other popular facility, they do hold some openings for each day to accommodate unexpected arrivals. Visiting the Perot Museum should be a must on every rockhound’s list. You can contact the museum at www.perotmuseum.org for booking information. In August 2013, I attended the three-day Dallas Mineral Collecting Symposium, a special event connected to the Perot Museum. The event began with a reception at the museum on Friday evening. More than 200 mineral collectors and Dallas dignitaries spent three hours enjoying the Gems and Minerals Hall. Members of the museum staff provided fine refreshments and were available to answer questions. It was a most pleasant evening. On Saturday, we all attended the wellorganized symposium, which was held at Southern Methodist University. It featured talks by a covey of experts, who took the audience on mineral journeys all over the globe, and even to Mars. Some of the recently productive mineral sources were described by Indiana Jones-type fellows who ventured underground and into the wilds to bring the audience the latest mineral news. Every lecture was a learning situation that

was presented in an entertaining way and kept the audience spellbound. Organized by mineral collector and dealer Rob Lavinsky and others, this symposium was one of the very best I‘ve ever attended! On Saturday evening, everyone was invited to visit The Arkenstone, Lavinsky’s mineral gallery, which is loaded with a full range of fine minerals. The refreshments provided were superb, and the social aspect of the evening reminded me of the great old days in Tucson, when we all would congregate at the Desert Inn in the evening and trade tall tales! This two-day event became a three-day affair, as many participants were able to visit a superb local collection on Sunday as guests of Jim and Gail Spann, who are well-known and popular collectors. You should consider attending this year’s Dallas Mineral Collecting Symposium, which is scheduled for Aug. 22-23 (see www.dallas​ symposium.org for details). Heritage Auctions, whose Dallas headquarters is nearby, has added fine minerals to the list of collectibles it sells on consignment (see “Specimens under the Hammer”, September 2013). It offers collectors, as well as dealers, the opportunity to view and bid on some really nice pieces. In June and October 2013, Heritage auctioned off portions of the private Hoppel collection of more than 2,000 specimens. The first auction alone brought in over $3 million, which tells you something about their quality. You are able to view images of some of these min­erals, purchase auction catalogs, and get details about upcoming mineral auctions at www.ha.com. The symposium and the fine-mineral auctions are evidence to me that Dallas is rapidly emerging as a very important center of mineral activities, which can only gain in importance and offer greater enjoyment to the collecting community.

The Perot Museum from page 13

One of the finest Chinese rhodochrosites ever found is displayed in the Lyda Hill Gems and Minerals Hall.

Rock & Gem Magazine features The Perot Museum of Nature and Science in Dallas, Texas. Their new mineral hall has changed the standard for fine mineral and gemstone display, and the article also introduces the Dallas Mineral Collecting Symposium to readers.