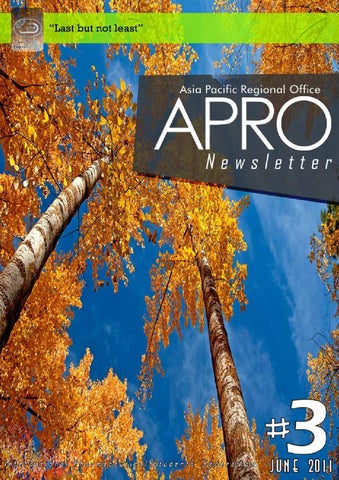 Letters from APRO RWG Melissa Hong - APRO Chairperson Working for 2 terms as APRO chairperson has been an exhilarating experience. I have met and made many friends and this experience has taught me the importance of time management and instilled within me the many qualities that are required to be a leader that can improve the pharmacy profession in my country. I will always cherish the time spent working as chairperson and I hope for future generations of pharmacy students to be lucky as me and infected with the IPSF spirit. Viva la Pharmacie! Geoffrey Chai - APRO Secretary To all the pharmacy students in the APRO region, nearly a whole year has passed since being elected as the Secretary of APRO. Throughout my term I have been able to accomplish many things. I have been able to provide more structure and communication within the APRO-RWG as well as trialling the first CP Online meeting. I have completed each of the tasks I set out to do to the best of my ability. I have hopes that APRO will flourish and continue moving into a bright future. Although many of you have yet to communicate with me I really hope we may meet one day. I would like to take this chance to say that it has been a privilege working with so many dedicated and motivated students, interns and young pharmacists. Chrysna Winandha - APRO Regional Project Officer I would like to thank everyone who have supported me as the RPO (Regional Project Officer) especially RWG, the IPSF executive, the subcommitees and everyone contributing. It has been an unforgettable and amazing experience working at the Asia Pacific Regional level as well as making new friends from different countries. As RPO it was my duty to communicate intensively with APRO CPs, but sometimes I felt that communication was not always maintained. Even though some of the RPO tasks have been fulfilled it was not perfect, but at least I have tried my best. I sincerely hope that the next RPO will have more

success in carrying out and reach our goal to be a promoter of the IPSF spirit and its activities.

Alexander Stefan - APRO Internal Coordinator & Communication Officer Time Flies! It has already been a year since being elected as the ICCO for the Asia Pacific Regional Office. I have had a great time and the chance to meet and work with IPSF friends. I really enjoyed this experience! To be frank, being an ICCO was not as easy as people or even myself imagined, but I was lucky to have lots of helping hands from the Publication Subcommittee of APRO. I also had some beloved friends from all over the world who supported me everytime, so a BIG THANKS to you guys! It has been a pleasure for me, serving IPSF for a year in this position. I guess this address might well be the last one from me as an APRO ICCO to you all, however it doesnâ&#x20AC;&#x2122;t mean I will leave APRO and IPSF forever so feel free to contact me through my Facebook page or my personal email as I will always be there for the lovely IPSF. Viva la pharmacie! Rizki Tsari Andriani - APRO Regional Student Exchange Officer Greetings to all the pharmacy students from all over the Asia Pacific region, time does flies and it has been almost been one year since I was elected as a Regional Student Exchange Officer (RSEO) of APRO regional working group. I was really honored to be elected as the RSEO, as it has been a fruitful and amazing experience for me. I would like to send my gratitude to all APRO RWGs for their hard work - you guys are the best! Also, I would like to send my gratitude to the IPSF executives especially Melissa Teo, who has guided me in performing RSEO tasks and projects, and all members of the Student Exchange Committee IPSF. It was my duty to improve SEP especially in the Asia Pacific, so I would like to give a special mention to my most important team, the APRO SEOs. This team of APRO SEOs has been paramount in helping me establish the Mapping project, which is new project that we initiated this year. It may not have been perfect but I hope all of us will continue improving SEP in our regions. Go exchange!

NUSPS Singapore Activities The major project in NUSPS for the Year 2011 would be the recently held “Pharmville Health Campaign 2011”. It was organised by NUSPS PPAC and was held from the 24th-25th of March. This event aimed to promote our Pharmacy profession through a series of interactive games at various booths. In this event, different working sectors of the Pharmacy profession were showcased, ranging from retail/community, to industry. Hands-on activities, such as compounding booths, allowed our NUS community to try making their own capsules. Also, we had a GMP booth to allow students to “manufacture” their own preparation in the most aseptic manner, thus introducing the idea of aseptic manufacturing to the public. Booths on minor ailments were also included to educate the public on the different common ailments and also, the different medications used. Last but not least, we also provided a free health check-up service whereby the NUS community can measure their body fat, height, weight, blood pressure and glucose levels.

Pharmville Health Campaign held at the Faculty of Science Foyer in NUS.

A display constructed to give the NUS community a brief idea on the various medications used for the different minor ailments.

Blood pressure measurement was done by our own NUS Pharmacy students to provide our students a platform to practise how blood pressure monitoring can be done and also to allow the NUS community to have their blood pressure values measured. After the measurement, an explanation was given to educate them on how to interpret the values and also, what is the optimum BP goals.

Our “drug making plant” booth whereby we tried to introduced the idea of aseptic manufacturing and to guide participants on how to prepare a product in the most aseptic manner. Upon completion, they’ll be given a certificate of participation.

Coloured sands were provided for the NUS community t o have a hands-on experience on making their own colourful capsules.

We also had a mini pill counting competition and the winner walked away with SGD$50 worth of vouchers. World No Tobacco Day 2011 World No Tobacco Day campaign was brought forward and held alongside our Pharmville Health Campaign. Our objective for our WNTD campaign this year was to increase awareness on the provision of smoking cessation counselling at the various retail/ community pharmacies and hospitals, and also to promote pharmacistsâ&#x20AC;&#x2122; role in smoking cessation counselling programmes and how pharmacists can aid a smoker to quit his/her addiction. We had a smoking cessation booth to educate the NUS population on the harmful effects of smoking, highlighting the benefits of quitting, explaining the various Nicotine Replacement Therapies available and also, the algorithm that pharmacists use for their smoking cessation programmes. The event was a great success and that it actually aroused many students to enquire further about such counselling services.

Lung structures were created out of newspapers, bubble wraps and chinese ink. The smokerâ&#x20AC;&#x2122;s lung was to highlight the irreversible damage of our alveoli with chronic smoking.

Display of the various NRTs were placed at the booth. And explanation was done to explain the provision of the different smoking cessation services provided, as well as how the different NRTs can aid a smoker in quitting.

posters such as the complications of smoking were designed and pinned up to highlight the importance in smoking cessation. .

BEM KEMAFAR UNPAD Indonesia Activities WORLD TUBERCULOSIS DAY World TB day was our very first mini campaign project this year! It was held on March 24th and about thirty students were involved in organizing this activity. We successfully spread 100 pamphlets, put on articles on the communication wall and also made an article to be published in Medifar, our campus magazine. Participants were divided into groups and each group spread TB information to people around the campus. We set our final meeting point at the campus’s main gate in order to attract attention. It was a communicative campaign, as people responded to our explanations and were curious about this illness. We informed them about what’s this contagious illness was; how to prevent and how to cure it. We enjoyed the campaign and were happy at the knowledge that we were giving this kind of information to people. This campaign also helped us in improving our communication skills. PHARODI “Pharmacist Road to Public” This event was held on April 30thMay 1st at the Faculty of Pharmacy of Padjadjaran University. Only the first 24 lucky applicants became the participants. On the first day, two professional practitioners presented information about communication skills and patient counseling from “Kimia Farma” and “Boromeus Hospital”. Not only was a presentation made, but also games and patient counseling simulations was conducted and evaluated by a professional counselor at the Pharmacy Installation-Boromeus Hospital. The participants were delighted at the information the speakers provided them.

The following day, all of the participants were divided into groups and went to four different pharmacies around campus. They had a chance to experience pharmacy by accompanying the pharmacist in charge for four hours, where they explored the hospital environment, learned about how to face a patient and dispense. They also had to collect information about the pharmacy itself whether it is good or not. After that, participants gathered back in the auditorium and evaluated the session. The overwhelming response from participants was that they were proud to be future pharmacists! 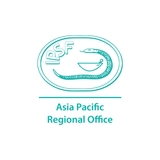