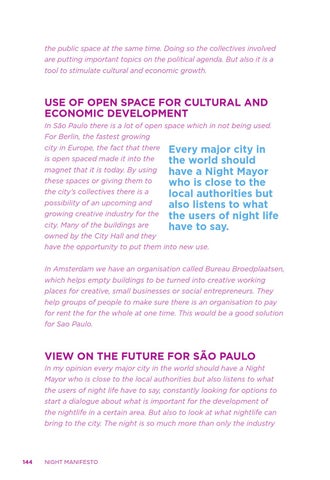 the public space at the same time. Doing so the collectives involved are putting important topics on the political agenda. But also it is a tool to stimulate cultural and economic growth.

USE OF OPEN SPACE FOR CULTURAL AND ECONOMIC DEVELOPMENT In São Paulo there is a lot of open space which in not being used. For Berlin, the fastest growing city in Europe, the fact that there is open spaced made it into the magnet that it is today. By using these spaces or giving them to the city’s collectives there is a possibility of an upcoming and growing creative industry for the city. Many of the buildings are

Every major city in the world should have a Night Mayor who is close to the local authorities but also listens to what the users of night life have to say.

owned by the City Hall and they have the opportunity to put them into new use. In Amsterdam we have an organisation called Bureau Broedplaatsen, which helps empty buildings to be turned into creative working places for creative, small businesses or social entrepreneurs. They help groups of people to make sure there is an organisation to pay for rent the for the whole at one time. This would be a good solution for Sao Paulo.

VIEW ON THE FUTURE FOR SÃO PAULO In my opinion every major city in the world should have a Night Mayor who is close to the local authorities but also listens to what the users of night life have to say, constantly looking for options to start a dialogue about what is important for the development of the nightlife in a certain area. But also to look at what nightlife can bring to the city. The night is so much more than only the industry 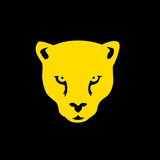