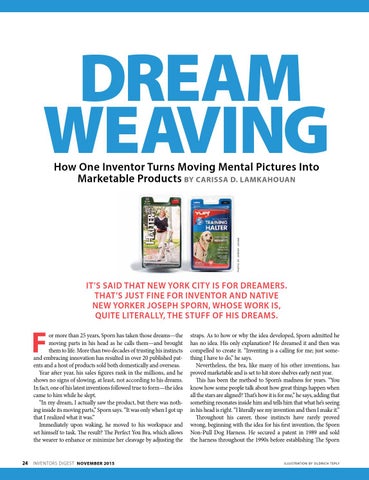 IT’S SAID THAT NEW YORK CITY IS FOR DREAMERS. THAT’S JUST FINE FOR INVENTOR AND NATIVE NEW YORKER JOSEPH SPORN, WHOSE WORK IS, QUITE LITERALLY, THE STUFF OF HIS DREAMS.

or more than 25 years, Sporn has taken those dreams—the moving parts in his head as he calls them—and brought them to life. More than two decades of trusting his instincts and embracing innovation has resulted in over 20 published patents and a host of products sold both domestically and overseas. Year after year, his sales figures rank in the millions, and he shows no signs of slowing, at least, not according to his dreams. In fact, one of his latest inventions followed true to form—the idea came to him while he slept. “In my dream, I actually saw the product, but there was nothing inside its moving parts,” Sporn says. “It was only when I got up that I realized what it was.” Immediately upon waking, he moved to his workspace and set himself to task. The result? The Perfect You Bra, which allows the wearer to enhance or minimize her cleavage by adjusting the

straps. As to how or why the idea developed, Sporn admitted he has no idea. His only explanation? He dreamed it and then was compelled to create it. “Inventing is a calling for me; just something I have to do,” he says. Nevertheless, the bra, like many of his other inventions, has proved marketable and is set to hit store shelves early next year. This has been the method to Sporn’s madness for years. “You know how some people talk about how great things happen when all the stars are aligned? That’s how it is for me,” he says, adding that something resonates inside him and tells him that what he’s seeing in his head is right. “I literally see my invention and then I make it.” Throughout his career, those instincts have rarely proved wrong, beginning with the idea for his first invention, the Sporn Non-Pull Dog Harness. He secured a patent in 1989 and sold the harness throughout the 1990s before establishing The Sporn 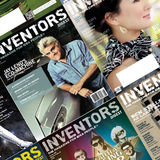