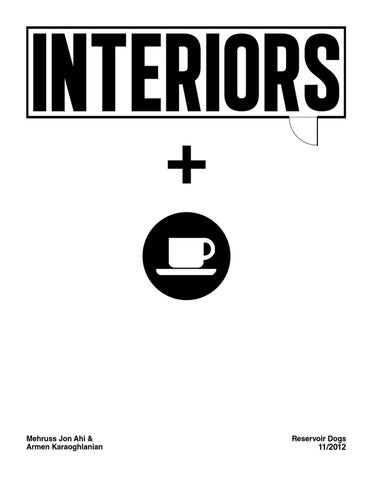 â&amp;#x20AC;&amp;#x153;The opening scene establishes fundamental character traits and serves as an allusion to the rest of the film.â&amp;#x20AC;?

Interiors: Issue 11 (11/2012) Film: Reservoir Dogs (1992) Director: Quentin Tarantino Quentin Tarantino has made his mark in cinema with his words. In his films, his writing jumps off the screen with his use of sharp dialogue and pop culture references. It’s no surprise then that he opens his first feature film as a writer and director with his own voice. The opening scene of his first film, Reservoir Dogs (1992), begins with dialogue that his character speaks over a black screen. The setting of the opening scene in the film is an actual diner in Eagle Rock, California, known as Pat &amp; Lorraine’s Coffee Shop, which still stands on Eagle Rock Boulevard. In this coffee shop, Mr. Brown (Quentin Tarantino) offers his interpretation of Madonna’s “Like a Virgin” as he sits with seven other gentlemen. The film opens without a proper introduction of these characters. In the course of this scene, we will discover that these characters are all using aliases rather than their real names. These gentlemen will become known as Reservoir Dogs, and all of them, with the exception of two, are wearing black suits and black ties with white shirts. Quentin Tarantino refrains from providing us with any context and it’s only later that we discover that these men are all strangers brought together for a robbery. The film opens mid-conversation with Mr. Brown offering his interpretation of Madonna’s song. The audience is immediately thrown into this world and plays catch-up with the characters’ conversations. The fact that all these characters are using aliases constantly makes us question their motives and relationships with one another. Quentin Tarantino’s camera is in constant motion, rotating around the characters in tightly composed shots, creating an intimate relationship with them. This prevents the audience from ever seeing the entire table and provides us with a sense of claustrophobia; despite the setting being a

public space, we are restricted in terms of shots and never see these characters from an objective distance. The filmmaker instead establishes an intimate relationship with these characters. The camera also drifts behind the backs of these characters, often dipping into complete darkness. This further emphasizes the dialogue of the film. In this scene, and for the rest of the film, the emphasis is placed on words rather than images. In our diagram, we have examined the spatial relations of these characters and analyzed their positioning. The use of colors as names highlights the fact that names are arbitrary, as we focus instead on their features. The opening scene establishes fundamental character traits and serves as an allusion to the rest of the film. There is little attention paid to the characters of Mr. Brown and Mr. Blue (Edward Bunker). In spite of the fact that Mr. Brown is the most talkative of the group, we learn very little about his character other than his analysis of “Like a Virgin.” Mr. Blue, similarly, shares his opinion a few times throughout the scene, but his character never really participates in the discussion in a significant way. Mr. Brown and Mr. Blue are the first two characters that are killed. The fact that we learn so little about them in the diner alludes to the fact that they won’t be necessary players in the rest of the film. Joe (Lawrence Tierney) is the leader of the gang and establishes himself as such during the opening discussion. In the opening moments, as everyone else discusses “Like a Virgin,” we hear (and briefly see) Joe rambling about names in an address book. “Toby. Who the fuck is Toby?” Joe is clearly disconnected from the others and disinterested in their conversation. In his position as the leader of the group, he is more interested in business that concerns him. It’s interesting to note that Joe’s major concern is a random name that he has stumbled upon in his address book, which connects to his general interest of names. Mr. White (Harvey Keitel) is established as our protagonist early on.

Mr. White expresses his annoyance about Joe’s rambling of names and is the sole character that confronts him. In the second part of this scene, when Mr. Pink (Steve Buscemi) refuses to tip, Mr. White once again stands up for the group and establishes himself as a character that defends others. In this case, he defends the waitress, and later in the film, he defends and even risks his life for Mr. Orange (Tim Roth). Mr. Blonde (Michael Madsen), who we later discover is a psychopath, displays odd behavior in a subtle manner during the opening scene. Mr. Blonde, who later becomes a threat to Mr. White, sits directly across from him. It’s as far away as he can possibly be from him while still being at the same table. Mr. Blonde, who goes on a shooting rampage during the robbery and later tortures a cop for no real reason, is equally unusual during the opening scene. Mr. Blonde (jokingly?) asks Joe if he should shoot Mr. White after he steals his address book. Their confrontation later in the warehouse deals with these issues on a more serious level. Mr. Brown explains to the group that Madonna’s song is about a promiscuous woman who finally finds someone that “hurts” her. In this conversation, Eddie (Chris Penn) is noticeably absent from the discussion, while many of the other characters share their opinions. In reality, Chris Penn was Madonna’s brother-in-law when his brother, Sean Penn, was married to the singer from 1985-1989. The song, “Like a Virgin” was released in 1984; whether or not Chris Penn’s character refrains from joining in on the discussion out of respect for his former sister-in-law, he is notably absent from the conversation except for one minor comment about her song, “True Blue.” In addition, despite seeming like he is one of the guys during their friendly chatter, Eddie does assert his dominance over the others, such as when he shoots down Mr. Orange’s request for taking his dollar back. In this space, although everyone is casual and friendly, it’s quite clear when Eddie separates himself from the others. Mr. Pink establishes himself as the

comedic outsider of the group, who has strong convictions. These characteristics are later carried over throughout the film. Mr. Pink claims he doesn&#39;t believe in tipping, and has justifiable reasons for this belief; however, when Joe later demands that he pitches in a dollar, he quickly accepts. Mr. Pink, unlike Mr. White, falters under the command of his boss. This characteristic is later explored in the warehouse, when Mr. Pink wholeheartedly believes there is a cop among them, but is plagued with doubt when confronted. Mr. Orange lacks any strong beliefs or opinions and only occasionally offers insight during their conversation. Mr. Orange’s quiet demeanor will later make sense when we learn that he is a cop; he is simply observing the other gangsters and picking up their language and behaviors. In the course of the film, Mr. White and Mr. Orange establish a close relationship despite the fact that they are strangers. Mr. White becomes a father figure for him over the course of the film. There are hints to this relationship during the opening scene through the selection of shots. In his use of this space, Quentin Tarantino seats Mr. White and Mr. Orange beside each other and offers several medium shots of them in the same frame together. These medium shots create a link among them in a subtle manner as we associate these two characters together with the use of the shots. Quentin Tarantino’s use of the space in the opening scene serves as the foundation for the entire film. In the course of the film, as characters die, we constantly reassess who is who by referring back to the opening scene. The audience constantly thinks of these characters by their discussions at the diner; Mr. Brown is the “Like a Virgin” guy, Mr. Pink is the guy that doesn’t believe in tipping, and Mr. Blonde is the guy that “shoots” Mr. White. Quentin Tarantino makes us one of the guys by keeping us close to these characters with his camera. The fact that they are seated around a circle table further suggests the link that binds these characters together. These characters all have different backgrounds, but the film will come full circle, and these characters will all face similar fates. INT contact: interiorsjournal@gmail.com