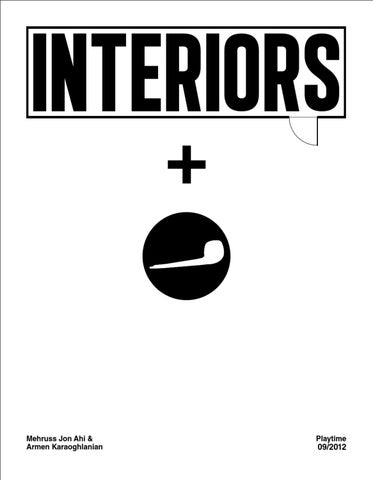 “The “world” that Jacques Tati has constructed is very specific; buildings are adorned with glass windows, clearly suggestive of the level of transparency that exists in a modernized world.”

Interiors: Issue 9 (09/2012) Film: Playtime (1967) Director: Jacques Tati In his career, Jacques Tati produced a mere six features films between 1949-1973. The French filmmaker served as writer, director and star of each of his pictures. In 1959, after his film, Mon Oncle (1958), won an Oscar for Best Foreign Language Film, he moved onto an ambitious project that would eventually force him into bankruptcy. Jacques Tati’s Playtime (1967) was filmed in 70mm, which he believed was the shape of the modern world, with five-track stereophonic sound. The director constructed more than just production sets for this film; he created a false city in the outskirts of Paris, complete with paved roads with streetlights, working water and electricity and even a functioning escalator in one of his sets. This city space became known as Tativille. The budget of the film quickly escaladed during production and its failure at the box office destroyed his once-successful career. The film essentially challenged the basic language of cinema. Jacques Tati humorously explores our relationship with modernism and consumerism with a fragmented narrative that points to the inevitable future society is approaching. The film is more concerned with the architecture of these spaces rather than an actual narrative. The architecture of the film is very much its own character. Jacques Tati has claimed that the only real star of his film was the set itself. Philip Kemp, film historian, explains that the architecture in the film dictates how people behave. The film, which was described by Jacques Tati as a film about straight lines that eventually develop into curves, explores how people’s movements follow the architecture of their surrounding spaces. Philip Kemp points out that in the beginning of the film, characters simply walk in straight lines and make sharp turns. Their actions, as such, are dictated by their surroundings.

Philip Kemp further suggests that the film itself is a film of patterns and movements, where the shape of an inanimate object takes on added significance over the course of a scene and becomes a visual pun. In Jacques Tati’s film, objects that have been invented and introduced in the modern world, which should make our lives easier, simply complicate our lives. In some sense, unnecessary and confusing gadgets replace common sense and simplicity. Philip Kemp also points out the insignificance of the architecture of the city of Paris to these tourists, who spend their time admiring banal products that “could have come from anywhere or nowhere” rather than discovering the city itself. In some sense, however, Jacques Tati suggests that architecture has become so derivative in the modern world that cities have lost their originality. Barbara, one of the main tourists, sees a travel advertisement for London. The building on the advertisement, however, is an exact copy of the building that exists right outside the building she is in. The use of Jacques Tati’s camera also suggests that we are all tourists – sampling life and culture. The film suggests that the citizens of the modern world, along with architecture and commercial products, have become standardized. The men and women are constantly shown as being uniformed and identical and are often confused and mistaken for one another. The color scheme of Jacques Tati’s film further emphasizes these ideas. In using pastel shades – greys, blues, browns and blacks – we are presented with a cold and dehumanized interpretation of society. The story is secondary; characters and dialogue are given a backseat as we instead observe social situations. In working with wide images, audiences become active participants and observers and can scan entire frames and focus on a certain part of the created image. In abandoning a conventional narrative, Jacques Tati provides us with a meditative experience. The audience, along with his camera, wanders around Paris throughout the course of a full day,

encountering various situations and people. The film also consists of numerous instances when physical spaces and buildings create the joke and deliver the gag. This is seen in a specific moment in the film when a man in a building bends down and locks a door. The positioning of the camera suggests that the handles on the glass door are horns on the man’s head. The “world” that Jacques Tati has constructed is very specific; buildings are adorned with glass windows, clearly suggestive of the level of transparency that exists in a modernized world. The questions he raises and explores with this film involve our rapidly evolving society that has now become driven with consumerism. In a modern world, our society has become impersonal and segregated and with modernity comes much disorientation. In our chosen scene, we diagrammed the apartment complex from the film and examined the exact moment when the two neighbors, in opposite rooms, watch television. In designing this diagram, we created both a floor plan and an elevation drawing. There are a number of scenes in this film that have been examined and analyzed in depth. In our chosen scene of the apartment complex, we have selected a scene that was missing during its original release in 1967. The scene was added into the film after Jacques Tati reedited the film in 1982 shortly before his death. The version of the film with the scene in tact is his final version. Jonathan Rosenbaum, film critic, explains that Playtime is a film that “unfolds entirely in a public space defined” by its sets. The film never explores private spaces – even the private homes in our examined scene is filmed entirely from outside. Jacques Tati deliberately keeps us outside in the streets. The audience never hears the sounds coming from within the space itself. This emphasizes the importance of the visuals. Jacques Tati creates observers out of his audience. It’s not necessarily to hear what the characters are discussing; rather, it’s important for us to notice the movements of

these characters and their actions. The apartments, with their glass windows, suggest a level of voyeurism that exists. These glass windows constantly remind us that these characters are often on display to the public world and casual passerby’s. In showing us a wide shot of the apartment complex, we can see similarities between the apartments. There is a sense of uniformity among these neighbors. In closer shots of the two lower apartments, which we have diagrammed, we can see how similar the placement of their furniture is. The chairs in their homes are the same chairs from the international trade fair from earlier in the film. The television sets are directly opposite each other, and the placement of the camera from the outside, suggests that the neighbors are watching each other while watching television. In the course of the scene, one of the neighbors walks in with an injured nose, as Monsieur Hulot (Jacques Tati) and his friends react to the program as if they are actually seeing their neighbors. The neighbor sits down and his wife touches his bandaged nose and as he does, hurts him. This makes them all squirm, as if they are reacting to their neighbors. In a later moment in the film, the neighbor takes off his jacket, prompting the mother and father in the opposite apartment to tell their daughter to leave the room. These situations constantly bring into question physical spaces and the relationship between architecture in this space. The fact that Jacques Tati has left the audience outside in a wide shot suggests the absence of the obstructing wall that exists between the neighbors. Jacques Tati’s Playtime is a film that could have easily been made now. The filmmaker would undoubtedly raise questions about the role of technological devices in our lives and how these devices segregate us rather than bring us together. It’s said that Jacques Tati had always hoped that he could one day establish a theater somewhere in the world that would screen Playtime every single day, forever. If there ever existed a film that deserved that honor, Playtime would be that film, because of its relevance four decades after its release. INT contact: interiorsjournal@gmail.com