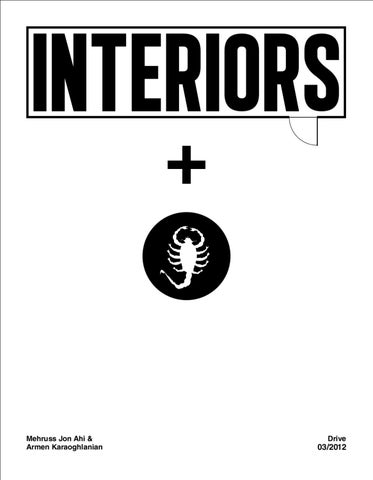 â&#x20AC;&#x153;The scene in the elevator has the unique distinction of being the most romantic and most violent scene in the film.â&#x20AC;?

Interiors: Issue 3 (03/2012) Film: Drive (2011) Director: Nicolas Winding Refn In understanding Nicolas Winding Refn’s Drive (2011), the thematic structure of the film itself needs close examination. The film, which concerns itself around a driver of getaway cars – whose name is never mentioned but is referenced as The Driver – derives its influences from a long list of inspirations, including films such as Le Samouraï (1967) and The Driver (1978) and filmmakers such as Martin Scorsese and Michael Mann. In the case of Drive, we are presented with a film that depends on its minimalism and also makes use of analogies in regards to various genres and styles. The film establishes The Driver as a mythological character, and although the film is grounded in realism, the filmmaker constantly makes allusions to The Driver’s mythical persona. In this sense, Drive is part superhero film and part fairy tale film. The protagonist of the film has no name, and in stripping him of his individualism, his character is further suggestive of a fictitious being, one that operates within his own boundaries, much like a superhero. In the same manner that superheroes crusade alone in the evening, The Driver drives; he is a watchful guardian for his city. The film, in essence, is focused with The Driver’s transformation into a superhero-like character. The scene that takes place in the elevator is the thesis statement of the film and represents The Driver’s transition from one mode of being into another. The Driver’s appearance is another indication of his persona. In some sense, The Driver’s scorpion jacket is his costume. In scenes when he is himself, rather than his persona, The Driver is always in regular clothing; however, in scenes when he drives and extends himself in being a protector of others, he switches into his scorpion jacket much like a superhero does with his costume. In a number of scenes, he even carries his

jacket over his back, referencing a cape. In addition, his gloves are also an essential part of his costume. In the heist gone wrong, The Driver questions Blanche’s motives, and as he does, he carefully puts on his gloves. The gloves, coupled with his jacket, allow for his transformation. In the film, The Driver is seen illuminating in his white jacket during night scenes, and in some ways, suggests his “character” only exists during times of crisis. Nicolas Winding Refn has also compared The Driver with the likes of Shane and John Wayne and has associated him with folklore. In his thoughts, The Driver is the “hero that comes in and protects the innocents against the evil that men do, and in that term, exorcises his own inner demons by sacrificing himself for the goodness of love and purity.” The fairy tale structure of the film divides the film into two parts. The first half of the film is pure and full of innocence whereas the second half of the film is dark and moralistic. In the first half of the film, the audience sees The Driver’s world through rose-tinted glasses. In the scene where he drives Irene and her son around the city, the warm color tones along with College’s “A Real Hero,” provide the scene with a sense of warmth. In the second half of the film, the audience is presented with a darker presentation of this world. The Driver becomes a nocturnal figure, frequently roaming through his vehicle. Nicolas Winding Refn keeps his camera inside The Driver’s car, much like Martin Scorsese did with Raging Bull (1980) and the boxing ring, allowing audiences to feel like they are alongside their respective characters. The switch from good to evil is indicative of Grimm’s Fairy Tales, which is the switch from “pure champagne” into “pure psychotic” behavior, as the filmmaker has described. This switch is further demonstrated in the elevator scene. The elevator, in general, plays a significant role in the lives of the characters in this film. The Driver first encounters Irene as he gets on and she gets off the elevator. The elevator is also the bridge between The

Driver’s own personal world (his home, his personal space) and the outside world (the space in which his persona exists). The persona never carries over into his personal space, and as a result, the elevator is the first step into his switchover. The scene in the elevator begins in the hallway of the apartments. The Driver and Irene walk in as the doors close behind them. The scene that follows breaks traditional storytelling techniques; as The Driver leans in and kisses Irene, we witness a slowing down of time and a changing in the lighting. These stylistic techniques, however, are authentic to the fairy tale and fantasy aspect of the film. The passionate kiss that precedes The Driver’s rage counters his violence. The camera moves in as the lights dim, providing audiences with a sense of heightened realism. This results in a change in the character’s, and as an extension, the audience’s perspective. This becomes suggestive of The Driver’s imagination. In some sense, this is an imagined state of mind; their kiss is unrealistic and it’s instead a representation of the perfect kiss on the part of The Drive. Nicolas Winding Refn comments on this decision and claims, “I always wanted to do a movie where two people are doing something, and then we pass through something – the camera passes through something, and when it passes, it’s an alternate universe.” The first diagram provided shows The Driver kissing Irene, a moment in the film where reality blends with fantasy. The second diagram provided shows the immediate switch in the tone of the film, as The Driver assaults the man in the elevator and bashes his head in. The use of space in this scene reflects the switch from pure love into pure evil within seconds. The scene in the elevator has the unique distinction of being the most romantic and most violent scene in the film. The Driver’s kiss is his goodbye to Irene, and the slowing down of time, suggests the switch that will soon follow. The elevator is now marked as not only a starting point for the relationship between the main characters, but

also an ending point. The man as lover and gentleman will now switch over into his fictitious persona and become a killer, and has sacrificed his own well-being for the sake of “goodness of love.” The sudden switchover into violence also suggests that it is necessary for him to go to the dark side to protect her. In this sense, the kiss becomes the payoff to the extreme violence. The violence doesn’t feel out of place because it is countered with an over-exaggerated and seemingly unrealistic kiss. Nicolas Winding Refn comments on this and states, “The payoff won’t have an effect unless the build-up is emotionally engaging.” The filmmaker furthers this by claiming making violence is like sex. “If you believe the build up to the climax, it becomes so much more engaging.” The elevator scene in the film, which in many ways is the most important scene of the entire film, was originally planned to take place in their garage. The decision to switch from the garage to the elevator came a week before shooting. The switch to an enclosed space adds to the claustrophobia of the scene. In choosing an enclosed space, Irene becomes entrapped as the violence erupts. In an elevator, Irene is in immediate danger. In reference to the duality of the film, it is interesting to note that The Driver and Irene kiss in the exact same corner of the elevator that The Driver kills the man in the elevator. The switch that takes place from good and evil is also suggested through the framing of this scene. The scene ends with Irene spilling out of the elevator in shock, as we end on a close-up of The Driver’s scorpion jacket; as he breathes in, the scorpion appears to be alive and breathing, further suggesting that his transformation has now reached completion. INT

Drive (2011). Director: Nicolas Winding Refn. Interiors is a monthly journal where we analyze and diagram the space of certain films. (Scene...

Drive (2011). Director: Nicolas Winding Refn. Interiors is a monthly journal where we analyze and diagram the space of certain films. (Scene...