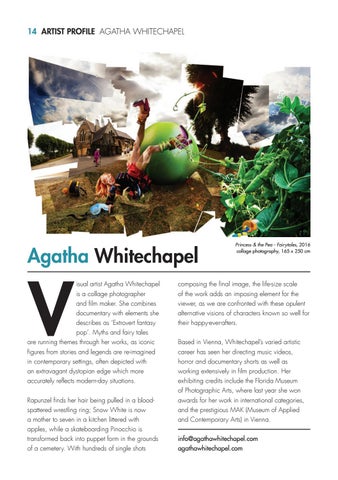 isual artist Agatha Whitechapel is a collage photographer and film maker. She combines documentary with elements she describes as â&amp;#x20AC;&amp;#x2DC;Extrovert fantasy popâ&amp;#x20AC;&amp;#x2122;. Myths and fairy tales are running themes through her works, as iconic figures from stories and legends are re-imagined in contemporary settings, often depicted with an extravagant dystopian edge which more accurately reflects modern-day situations. Rapunzel finds her hair being pulled in a bloodspattered wrestling ring; Snow White is now a mother to seven in a kitchen littered with apples, while a skateboarding Pinocchio is transformed back into puppet form in the grounds of a cemetery. With hundreds of single shots

composing the final image, the life-size scale of the work adds an imposing element for the viewer, as we are confronted with these opulent alternative visions of characters known so well for their happy-ever-afters. Based in Vienna, Whitechapelâ&amp;#x20AC;&amp;#x2122;s varied artistic career has seen her directing music videos, horror and documentary shorts as well as working extensively in film production. Her exhibiting credits include the Florida Museum of Photographic Arts, where last year she won awards for her work in international categories, and the prestigious MAK (Museum of Applied and Contemporary Arts) in Vienna. info@agathawhitechapel.com agathawhitechapel.com

Paint, plaster, wood and ink are all powerful resources in the hands of an artist, and the ability to transform their chosen material from its raw state into works of art is something that takes true vision. The most unusual and unexpected everyday objects and materials can find their way into an artist’s studio. Brightly coloured balloons, while usually found adorning the ceilings of a child’s party, are transformed into playful sculptures with the twist of Masayoshi Matsumoto’s hand, while marble, lime, copper, iron and pigments fuse together in Hayley Reynold’s atmospheric modern frescos, heightened into fine art through her creative eye. Eggshells once took the place of eyeballs in Aspencrow’s hauntingly life-like sculptures of celebrities past and present, although he has since developed his techniques with resin, allowing him to create perfect replicas of the globular organs. When looking at the work within the pages of this issue, take some time to think of each small piece of 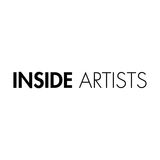 More from Inside Artists